There's no way we can avoid a recession: John Zechner

Canadian employment grew for a fourth straight month, and the broad gains strengthen the case for the Bank of Canada to hike interest rates again later this month.

The economy added 104,000 jobs in December, while the unemployment rate fell to near a record low of 5 per cent, as youth and private-sector employment grew, Statistics Canada reported Friday in Ottawa. Economists were anticipating an increase of just 5,000 positions and a jobless rate of 5.2 per cent, according to the median estimates in a Bloomberg survey.

The data suggest Canada’s job market was still running at an unsustainable pace at the end of last year, raising questions about whether the central bank will need to raise rates even higher to cool demand.

After the jobs release, overnight swaps traders raised the odds of a 25 basis-point increase in the policy rate on Jan. 25 to nearly 90 per cent, up from about two-thirds previously. Canadian Imperial Bank of Commerce changed its forecast, calling for a hike instead of a pause.

Employment increases extended a rebound from a summer slump, and there were 130,000 more Canadians working in December than the previous employment peak in May. Strong demand for workers continues to show up in paychecks, with wage pressures still rising above 5 per cent.

“Today’s robust results support the view that the Bank of Canada will hike rates again later this month,” Douglas Porter, chief economist at Bank of Montreal, said in a report to investors. “The risk is heavily tilted to the need for the bank to ultimately do even more to quell underlying inflation pressures.” 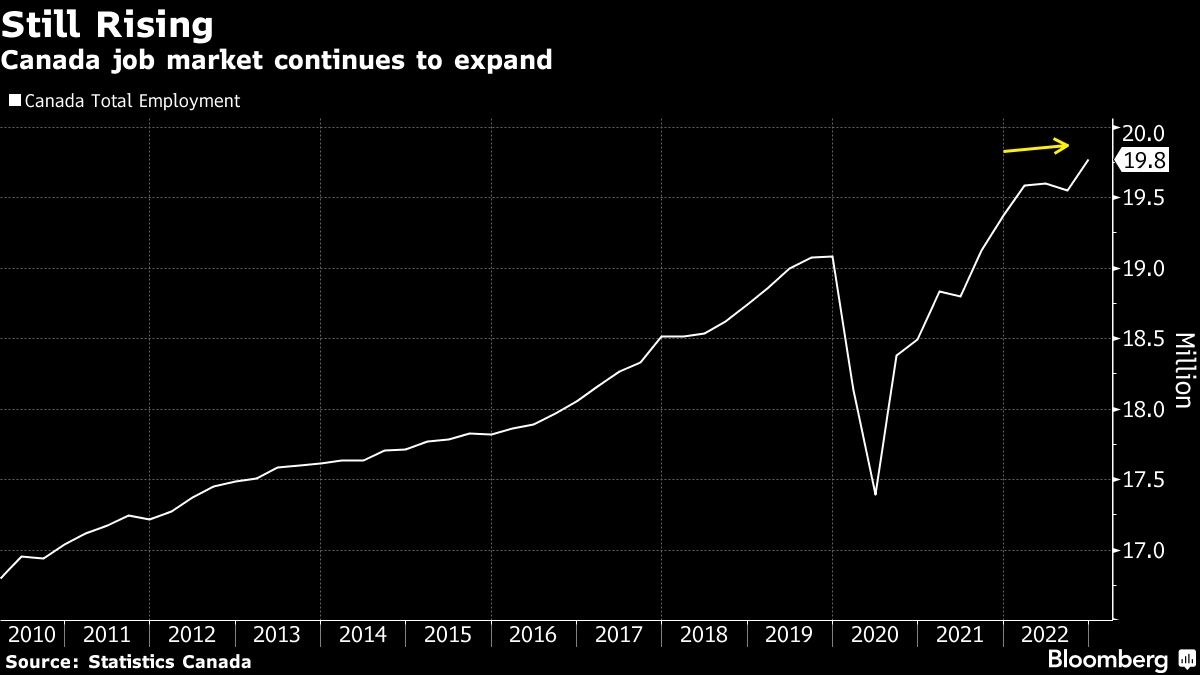 The employment and wage gains add to a string of stronger-than-expected data that point to an economy showing few signs of stalling, despite economists’ expectations that the economy will enter a technical recession in the first half of 2023.

Underlying inflation pressures in November trended higher, and early estimates suggest the economy is on track to expand at an annualized rate of 1.2 per cent in the last quarter of 2022 — more than double the Bank of Canada’s forecast.

Canada’s economy is being helped by resilient growth in the U.S., where nonfarm payroll employment rose by 223,000 in December and the unemployment rate fell to 3.5 per cent, matching a five-decade low, a Labor Department report showed Friday.

The biggest employment increase in Canada was concentrated in the youngest cohort of workers, fully recouping summertime losses.

Governor Tiff Macklem and his officials have slowed down the pace of rate hikes and signaled that future decisions will depend on economic data. The central bank has already raised borrowing costs by 4 percentage points since March, bringing the benchmark overnight rate to 4.25 per cent.

In December, total hours worked were little changed on a monthly basis, and up 1.4 per cent compared to a year earlier.

Employment increased in six provinces, including Ontario, Alberta and British Columbia, and was up in construction, transportation and warehousing, recreation, scientific and technical services, and accommodation and food services.

“When we’re thinking of monetary policy implications of this report, definitely not on the pause side,” Brendon Bernard, senior economist at Indeed.com, said on BNN Bloomberg Television.