Canada’s labor market suffered a larger-than-expected setback last month after the nation was hit with fresh lockdowns meant to contain the omicron variant of Covid-19.

The country shed 200,100 jobs in January, Statistics Canada reported Friday from Ottawa, ending a seven-month streak of gains. Economists in a Bloomberg survey were expecting a drop of 110,000. The unemployment rate rose to 6.5 per cent, from 6 per cent at the end of last year.

Despite the setback, analysts expect a rebound as early as this month as containment measures are lifted, putting the economy back up against what the Bank of Canada believes is full capacity. Still, the sharper-than-expected decline could raise questions about the timing of Governor Tiff Macklem’s expected interest rate hikes. 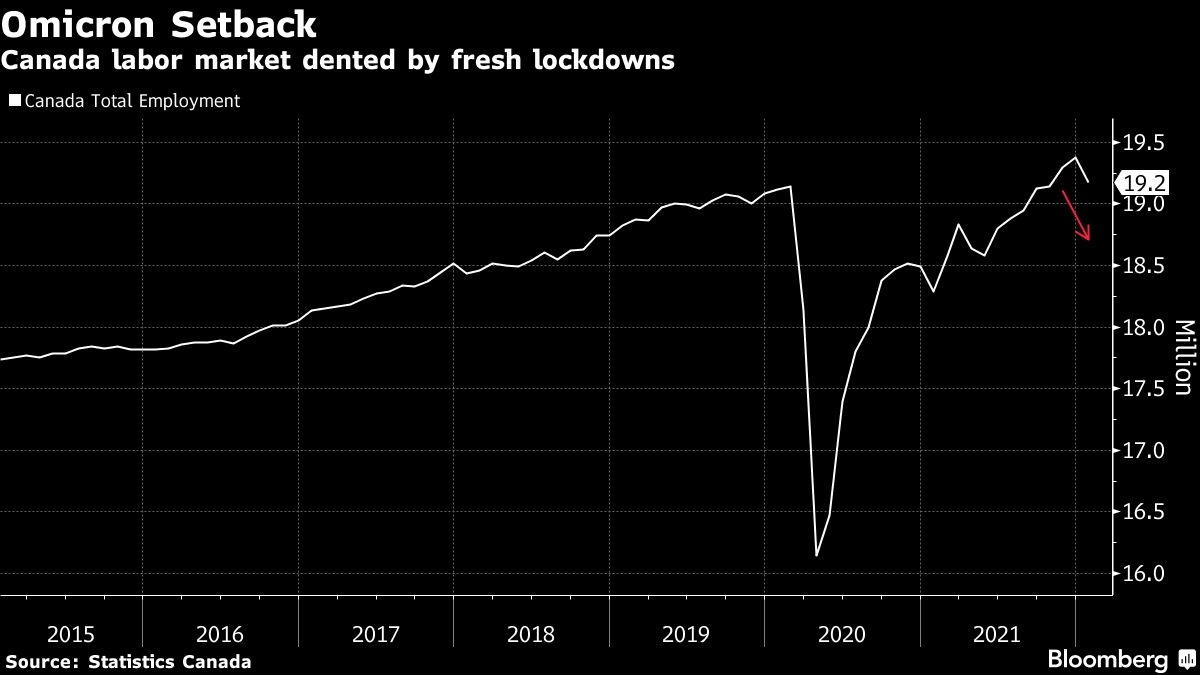 The Canadian dollar fell 0.7 per cent on the report to US$1.2763 per U.S. dollar as of 9:22 a.m. Yields on Canadian two-year bonds rose, after U.S. employers added more jobs than expected in January.

Swaps trading suggests markets are still fully pricing in a hike at the Canadian central bank’s next policy decision on March 2, with five more likely to come over the next year.

The bulk of the losses were limited to pandemic-exposed sectors. Accommodation and food services accounted for 113,000 of the lost jobs. Goods-producing sectors recorded a gain, led by construction.

Outside of high-contact sectors, the data suggest “the beginnings of a recipe for another swift post-Covid-wave rebound,” Royce Mendes, head of macro strategy at Desjardins Securities Inc., said in a report to investors. “With the Bank of Canada on a mission to head off further inflationary pressures, central bankers are still on track to hike rates in March.”

“A narrowly concentrated plunge in Canadian employment in January will not shake the BoC’s resolve to start rate normalization next month. Indeed, a surprising gain in U.S. jobs in the month bodes well for external demand.”

January’s declines were driven by Ontario and Quebec, where the lockdowns were most severe. Young workers, who are more likely to be in affected sectors, accounted for nearly half of the lost jobs.

The extent to which omicron swept through the country was also reflected in the data, with one in 10 employees reporting they had to be absent from their job due to illness or disability. Typically, the share of illness-related absence for the month of January has been about 7 per cent in recent years.

Canadian employment remains just over 30,000 above pre-pandemic levels, and the country has a strong track record of bouncing back after prior waves of the virus.

Yet, Friday’s jobs numbers suggest a tough start for the nation’s economy in the first quarter.

Hours worked -- which is closely correlated to output -- fell 2.2 per cent in January, and the number of employees who worked less than half their usual hours jumped by 620,000. January also saw the first drop in full time employment -- down 82,700 -- since June.