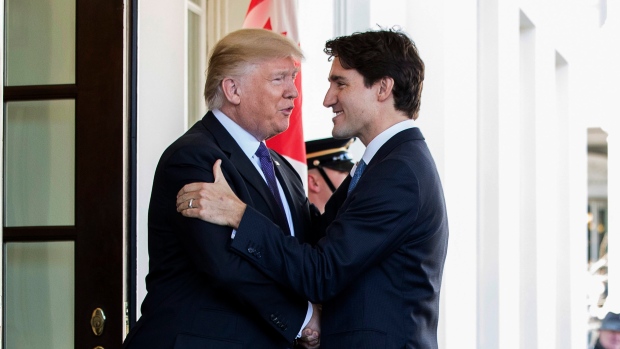 Justin Trudeau and Donald Trump talk at the White House on Feb. 13 , The Canadian Press

Unifor President Jerry Dias is insisting that Canada take control of its own destiny and start insisting on its own NAFTA adjustments.

According to Dias, merely waiting to see how things unfold is a flawed strategy. “We need to be aggressive. We can’t let Donald Trump control the economic agenda here in Canada,” said the president of the union that represents 22,000 forestry workers and 24,000 autoworkers.

This comes after the U.S. President threatened to withdraw from NAFTA. Within hours, Trump backed down from the threat following conversations with Prime Minister Justin Trudeau and Mexican President Enrique Pena Nieto. In an interview on CBS' "Face the Nation" over the weekend however, Trump shifted back to his tougher position, making it clear that if he's unable to renegotiate NAFTA, he will terminate the deal.

“[Trump’s] just doing this to poke the bear,” said Dias. “Canada needs to take a firm position and say we want to renegotiate NAFTA and put the United States and Mexico on notice.”

He also suggests that Canada use its raw materials and natural resources as leverage in renegotiating this deal because these are things that the United States desires.

Dias believes that renegotiating NAFTA is the best way to resolve the softwood lumber dispute as well, which was amplified after the Trump administration slapped tariffs on Canadian softwood exports last week. He predicts that the forestry industry could lose 25,000 jobs as a result of this move.