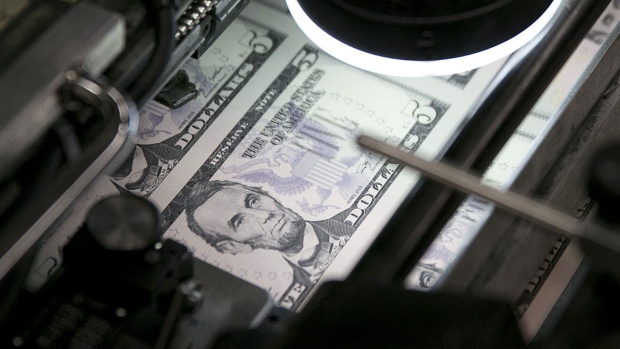 Canada is marketing a five-year bond deal in U.S. dollars at a higher yield than equivalent issues in the domestic market as the federal government seeks to diversify its funding sources.

The top rated nation plans to price the US$3 billion transaction at 6 basis points over the U.S. Treasury yield, according to people familiar with the matter. That’s equivalent to a yield in loonies of around 1.93 per cent and compares with 1.62 per cent for Canada’s five-year bonds denominated in the country’s own currency, according to data compiled by Bloomberg.

BNP Paribas SA, Canadian Imperial Bank of Commerce, HSBC Holdings Plc., Royal Bank of Canada and Toronto Dominion Bank are arranging the deal, which is expected to be priced Tuesday. Canada last sold bonds in U.S. dollars a year ago, when it priced $3 billion of 2022 bonds at a spread of 10 basis points, or a yield of 2.633 per cent, the data show.

The new bond will supplement Canada’s foreign exchange reserves and diversify its sources of financing, an Ottawa-based press officer at Canada’s Department of Finance said in an email. These funds will not be used for other kinds of government financing or program spending, which are raised exclusively through domestic borrowing programs, she said.

By comparison, Royal Bank of Canada issued $1 billion of fixed rate three-year senior bail-in bonds at a spread of 38 basis points over U.S. Treasuries, equivalent to a yield of about 2.15 per cent. While there isn’t a direct comparison in the domestic market, a similar duration security issued by rival Bank of Nova Scotia yields 2.31 per cent, data compiled by Bloomberg show.