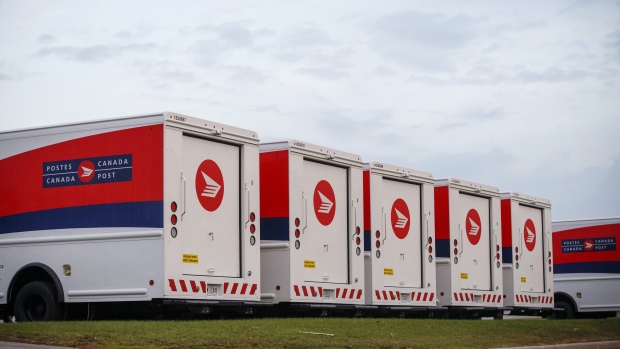 The information, obtained by The Canadian Press through freedom of information requests, indicates the bulk of the citations are in and around Toronto.

“To meet the needs of Canadians, our employees have to routinely park their vehicles,” said Canada Post spokesman Jon Hamilton. “With the concentration of addresses in urban downtown cores and a rising demand for pickups and deliveries, this can cause challenges, not just for Canada Post but for all delivery companies.”

Under the federal Canada Post Act, the corporation has, with some exceptions, the “sole and exclusive privilege of collecting, transmitting and delivering letters to the addressee thereof within Canada.” The corporation has a fleet of almost 13,000 vehicles that delivered close to eight billion pieces of mail last year.

Eric Holmes, a spokesman for the City of Toronto, said mailbox placements are approved with the “general preference” they not be placed along high-volume streets.

“Illegally parking, stopping, or standing a vehicle is dangerous for pedestrians, cyclists and other motorists and creates congestion,” Holmes said. “Enforcement of parking violations is one way the City of Toronto helps deter this behaviour.”

Hamilton said the corporation was an “active participant” in partnerships with Toronto, Montreal and Vancouver that aim to ease congestion, especially in downtown cores and along major access routes.

Canada Post spars with media group over the flyer business

“We also review our operations to make changes, such as adjusting pickup and delivery times, where possible,” Hamilton said. “It's a bigger discussion than simply designating more delivery zones.”

Overall, the fines are barely a rounding error for Canada Post, which lost $270 million last year on revenue of $6.6 billion dollars - three-quarters of the corporation's total revenues. The company initially refused a June 2016 request for the ticket data, citing “commercial sensitivity.”

It relented in June after belated intervention from the information commissioner and released the total value of tickets by region paid from 2009 until mid-2016. Asked for updated figures, the country's largest retail network insisted on receiving a new formal access-to-information request before providing them.

All regions of Canada show ticketing of branded Canada Post vehicles, but most citations are in major urban centres, where thousands of mail addresses can be concentrated in a few blocks. Despite the daunting logistics of pickup and delivery, a Toronto traffic police spokesman was blunt:

“This is an easy one,” Sgt. Brett Moore said. “There is no preferential treatment for Canada Post.”

In general, Canada Post's drivers are on the hook for traffic violations. However, company policy makes allowance for parking tickets - with an excuse - except in designated accessibility spots.

Emilie Tobin, with the Canadian Union of Postal Workers, said the idea of parking exemptions for Canada Post vehicles is a complex topic given that the company is federally regulated but drivers have to follow varying provincial and municipal bylaws.

“In some areas, it is difficult to find a legal parking space, so our members do have to park illegally and some do incur parking tickets,” Tobin said. “It's not an ideal system and postal workers would prefer that routes could be structured in a way that allowed for legal parking 100 per cent of the time.”