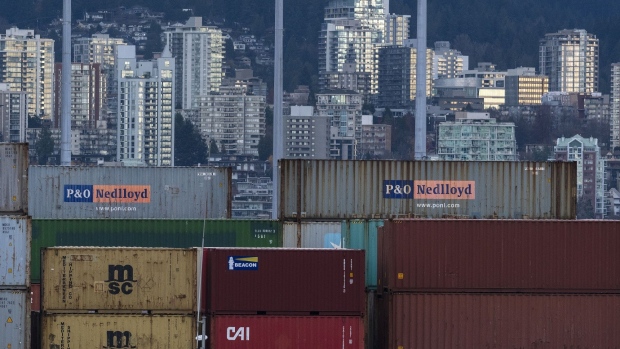 Containers at the Port of Vancouver in Vancouver, British Columbia, Canada, on Friday, Nov. 27, 2020. Companies are rushing to get containers to Asia rather than waiting for agricultural products to be loaded and sent so that consumer goods made in factories there can be shipped to North America in time for the busy Christmas shopping season. Photographer: Jennifer Gauthier/Bloomberg , Bloomberg

Both exports and imports were down in February. Shipments abroad fell 2.7%, but that’s after a surge in January of 8.2%. Imports were down 2.4%, more than offsetting gains a month earlier and bringing purchases from abroad to their lowest level since August.

Statistics Canada said a global shortage of semiconductor chips impacted trade in the auto sector, with exports of motor vehicles and parts dropping 10% in February and imports down 7.8%.