Canadian inflation comes in below expectations in October

The consumer price index rose 6.9 per cent from a year ago, in line with economist expectations and matching the increase in September, Statistics Canada reported Wednesday. The index gained 0.7 per cent during the month, a touch lighter than the 0.8 per cent month-on-month gain forecast by economists.

Bonds fell, with Canada’s two-year yield rising to 3.877 per cent at 8:43 a.m. Ottawa time, about 3.5 basis points higher than its level prior to the data release. The loonie briefly dropped, then recovered to trade at $1.3241 per U.S. dollar. 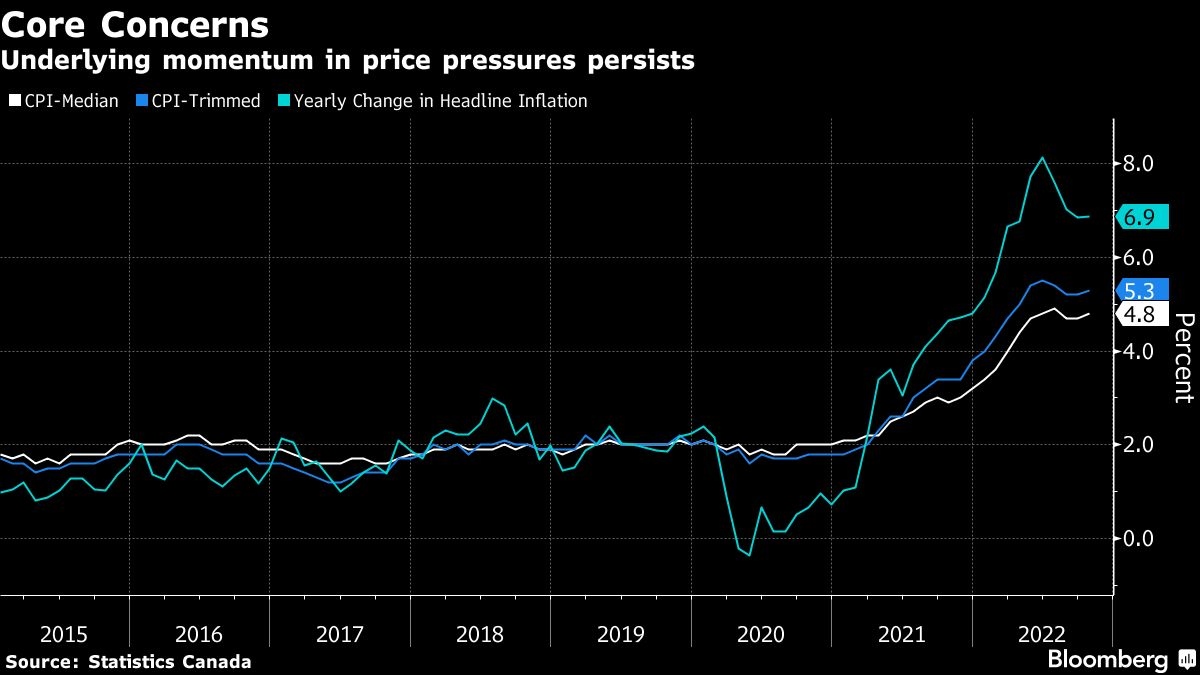 The report shows that while price pressures don’t appear to be worsening -- as some were expecting -- there is still plenty of inflation in the system, giving officials at the Bank of Canada little room to pause their efforts to slow down the economy.

October’s numbers suggest taming inflation is “going to be a marathon, it’s not going to be a sprint. It’s going to take time before we see some conclusive evidence” of price pressures abating, Jimmy Jean, chief economist at Desjardins Securities, told BNN Bloomberg television after the release.

Two key inflation measures tracked closely by the central bank -- the so-called trim and median core rates -- inched higher, averaging 5.05 per cent in October from 4.95 per cent a month earlier. On a month-over-month seasonally adjusted basis, the consumer price index rose 0.6 per cent, up from 0.4 per cent in September.

Pushing inflation higher in October were rising prices for gasoline, which jumped 9.2 per cent on the month. Slower price growth for natural gas and groceries, however, helped offset that effect.

The inflation numbers, which came less than two weeks after a stronger-than-expected jobs report, continue to show the economy in overheated territory. Bank of Canada Governor Tiff Macklem has said that rates will need to continue to rise further, while acknowledging the end of this tightening cycle is near.

Traders are pricing in at least a 25 basis-point increase at the next policy decision on Dec. 7, with a 50-50 chance of a half percentage point hike. The central bank has already increased borrowing costs by 3.5 percentage points since March, bringing the benchmark overnight lending rate to 3.75 per cent.

Average hourly wages rose 5.6 per cent on a year-over-year basis last month, meaning that, on average, prices still rose faster than wages, the report said. The gap in October was smaller compared with September.