Reasons not to worry about Canadian banks' loan provisions

For Canadian bankers, 2019 shaped up to be the worst year for bonuses in close to a decade.

The country’s six largest lenders set aside $15.6 billion for performance-based compensation, with the 2.4 per cent increase from a year earlier marking the smallest jump since 2010’s 1.1 per cent bump, according to data compiled by Bloomberg. Canadian Imperial Bank of Commerce and National Bank of Canada allocated less for their bonus pools in fiscal 2019 than in the previous year.

“Bonuses themselves were some of the bleakest in almost a decade,” said Bill Vlaad, president of Vlaad & Co., a Toronto-based recruitment firm that monitors compensation trends. “Financial professionals should count their blessings that it wasn’t worse. It could very well have been a bloodbath and a much more aggressively negative environment.”

Banks saw little change in annual revenue from their capital-markets operations, bringing in a collective $25.4 billion for the year ended Oct. 31. Underwriting and advisory fees dropped 5.7% to $4.61 billion in a challenging year for the industry worldwide, though that decline was countered by a 7.5 per cent increase in trading revenue to a record $11.7 billion.

Senior investment bankers will see a 10 per cent decline in compensation from last year, hurt by fewer financings and a decline in mergers-and-acquisitions activity, according to Vlaad & Co. Junior investment bankers will see little change in their payouts following three years of increases, while those in sales, trading and research will see compensation fall 15  per cent to 25  per cent, and fixed-income employees will face a similar decline, the firm said.

Bankers serving Alberta’s energy firms have had a miserable year, while mining also has been tough for most firms. Those working with diversified industries will see little change or a slight drop from prior years, while bankers in real estate and infrastructure may see some gains, according to Vlaad & Co.

“We now see the marketplace is on an aggressive readjustment of compensation, and it’s going to continue this way for the next three to five years,” Bill Vlaad said in an interview. 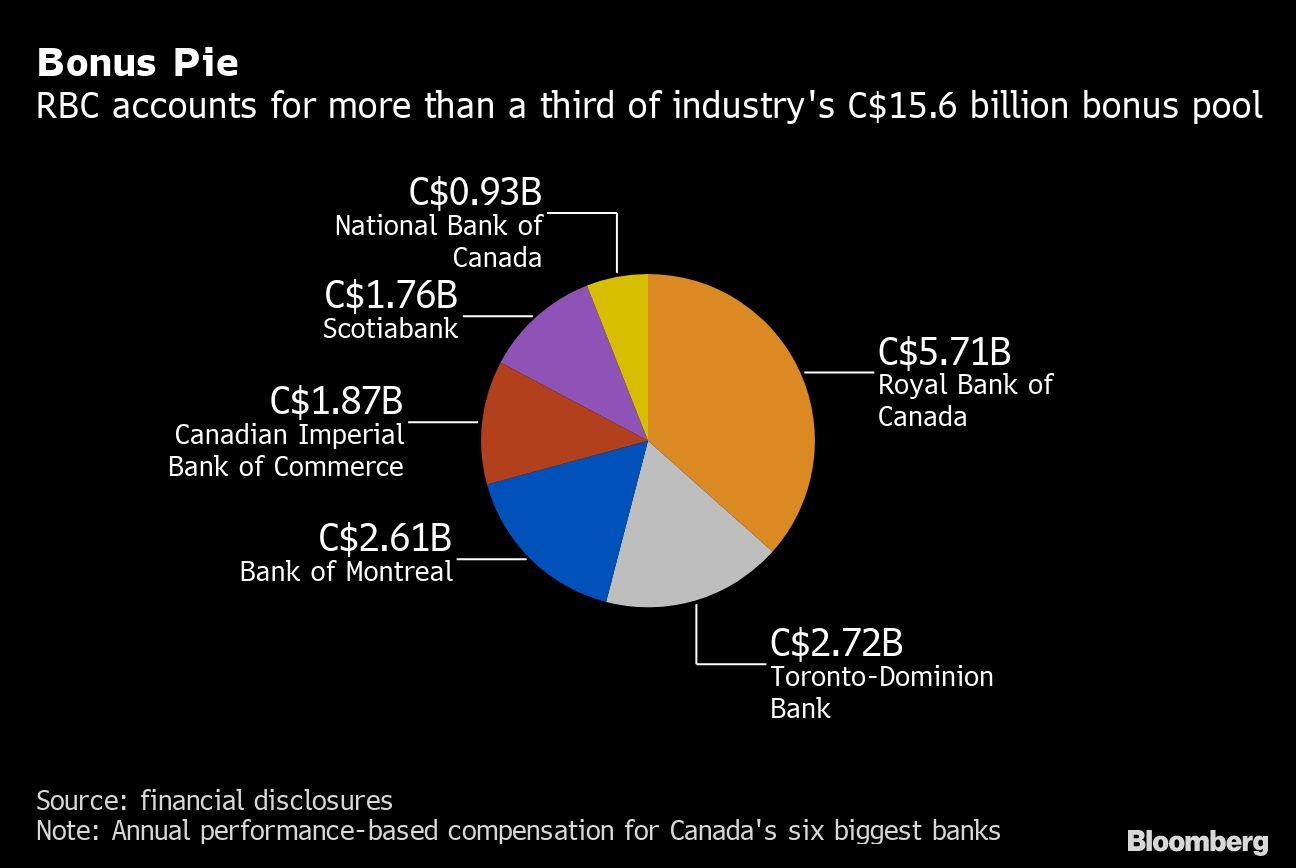 Here’s a breakdown by bank:

Royal Bank of Canada, the country’s largest lender by assets and home to its biggest capital-markets division, set aside $5.71 billion for variable compensation, with the 1.9  per cent increase the smallest in three years.

The payouts are tied in part to the “ebb and flow” of markets-related businesses, with stronger equity markets helping lift wealth management and lower capital-markets fee pools hurting those operations, Royal Bank Chief Financial Officer Rod Bolger said in a phone interview. Compensation is also a component of competitiveness in terms of attracting, engaging and retaining talent, he said.

“Employees are paid both on personal performance and the performance of the business or function they work for, and a part of RBC results overall,” Bolger said. “We pay appropriately -- the results speak for themselves.”

Toronto-Dominion Bank, Canada’s second-largest lender, set aside C$2.72 billion for incentive compensation, with its 5.1 per cent increase the smallest since 2013. After accounting for additional full-time employees -- up 5.5 per cent from a year ago -- as well as acquisitions and foreign-exchange considerations, CFO Riaz Ahmed said there may be little change from a year earlier.

“I’d say overall it feels quite flat,” he said in a phone interview.

Bank of Nova Scotia, the third-largest lender, said performance-based compensation rose 8.4% to C$1.76 billion, its biggest jump in seven years, though the Toronto-based company has to spread that out among more employees following a flurry of takeovers at home and abroad.

“Through recent acquisitions over the last 18 months, Scotiabank has seen growth in the size of our employee base, and with that, growth in our overall incentive pool,” spokesman Clancy Zeifman said in an emailed statement.

Bank of Montreal raised its performance-based compensation four per cent to $2.61 billion, its smallest increase in six years.

“We’re committed to two key principles: One is paying for performance, and No. 2 is having market-competitive compensation for our employees,” CFO Tom Flynn said in a phone interview. “For the current year, we think we’re in an appropriate place from a bonus perspective and performance-based compensation perspective.”

CIBC allocated 4.7 per cent less for performance-based pay, reserving $1.87 billion in its first reduction since 2008.

“Our compensation reflects performance this year, as it would any other year,” CFO Hratch Panossian said in a phone interview. “Our philosophy is to pay competitively for the market as well as to pay for performance, and we think both of those things are achieved this year.”

National Bank set aside 1.3 per cent less this year for bonuses after facing a drop in revenue in corporate and investment banking and at its debt-buying business, Credigy. The Montreal-based lender allocated $932 million for variable compensation.

“I would say 80 per cent, 85 per cent of the amount is revenue-linked,” Jean Dagenais, senior vice president of finance, said in a phone interview. “The financial markets revenue was a bit slower and the Credigy revenue was a bit lower than last year.”

Incentives make up about 15 per cent of the amount, and those are indirectly tied to revenue, Dagenais said.