Canada’s economy is shifting into a lower gear as some of the country’s growth drivers begin to lose steam.

Statistics Canada will release third-quarter gross domestic product numbers Friday that will probably show a sharp drop in growth. According to the median forecast of economists in a Bloomberg survey, the country’s expansion slowed to a 1.3 per cent annualized pace in the three months through September, down from an unsustainable clip of 3.7 per cent in the prior period.

It’s a return to sluggish growth that may become the new normal for a Canadian economy seeing many of its engines of growth sputter, from investment and exports to weakening consumption as the nation’s households cope with high debt levels.

Beyond the third quarter, economists predict another 1.3 per cent reading in the final three months of 2019. Next year doesn’t look much better, with growth seen running at about 1.5 per cent in 2020. That’s a sufficiently prolonged period of below-potential growth for markets to anticipate the Bank of Canada will cut interest rates as early as January.

Canada’s exporters have floundered in the second half of the year. After a rebound in oil shipments temporarily boosted real exports in the second quarter, they’ve since flat-lined, falling 0.3  per cent since June in volume terms. Waning exports are also hitting manufacturers, whose shipment volumes decreased one per cent in the third quarter, led downward by oil and coal.

Business investment remains sluggish, down 22 per cent since oil prices began collapsing in 2014. While the Bank of Canada’s latest indicator of business activity ticked up, the central bank still sees investment as a 0.4 percentage point drag on 2019 growth. Until global uncertainty and trade tensions abate, Canadian businesses are unlikely to make major capital expenditures. 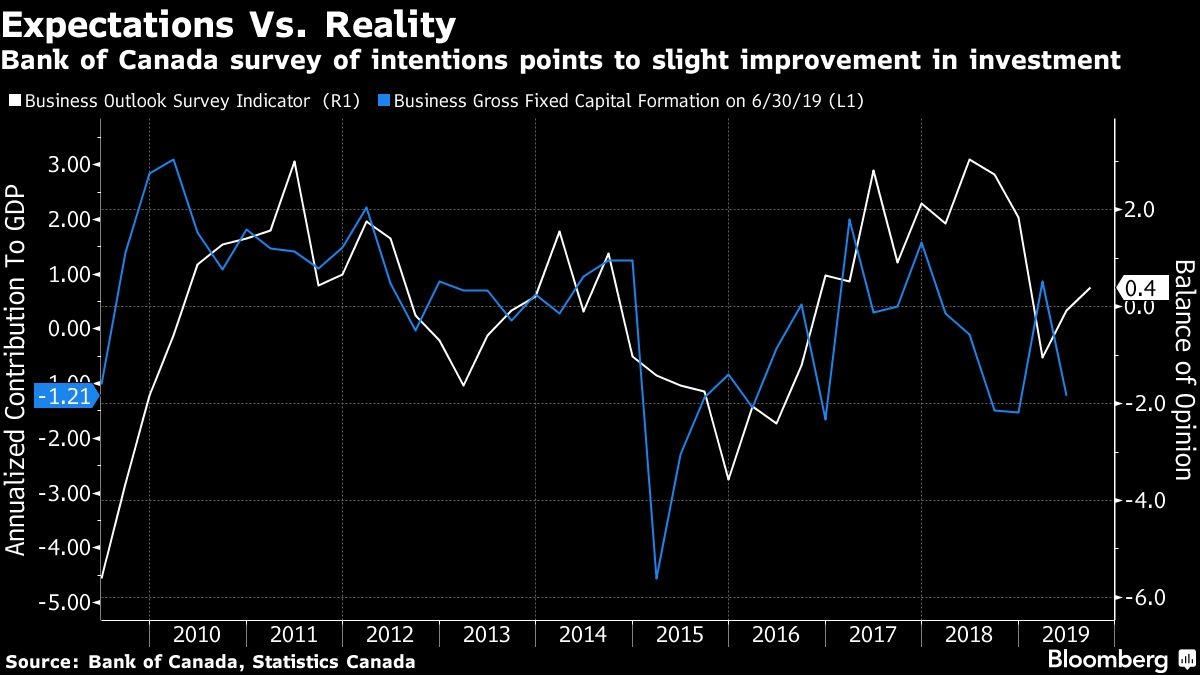 Consumption has long propelled Canada’s economic growth, but cracks may be forming, even with a robust job market and wages growing at the fastest pace in a decade. Economists expect consumption to pick up in the second half of the year, but that’s coming off a second quarter that was the slowest since 2012. The lack of vigor is most apparent in a retail sector that’s seen volumes flat over the past year.

One bright spot in the GDP numbers could be housing, which has rebounded as borrowing costs decline and buyers adjust to tighter mortgage rules. Home sales rose 7.3 per cent in the third quarter, the fastest quarterly pace since the end of 2017. Most economists estimate residential investment picked up for a second straight quarter.