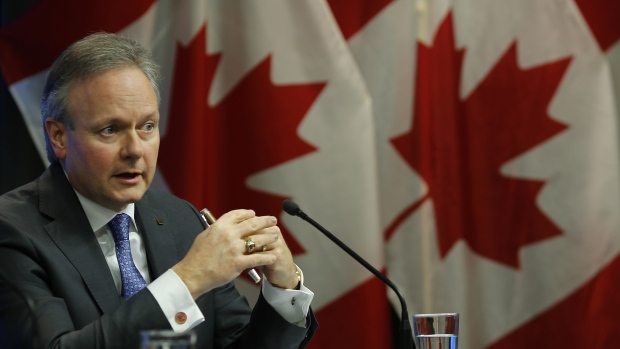 Stephen Poloz, governor of the Bank of Canada, speaks during a press conference in Ottawa, Ontario, Canada, on Wednesday, Jan. 17, 2018. , Bloomberg

OTTAWA - Bank of Canada Governor Stephen Poloz said on Wednesday the economy was "finally positive" after a long adjustment to a sharp fall in oil prices, but he added there was still softness in several areas of the country.

Poloz also told the Senate's banking committee that while interest rates would go up from their current low levels, moving too quickly could create a financial stability risk.

The central bank has hiked three times since last July as the economy improves and the unemployment rate hovers around 40-year lows. It held rates steady last week at 1.25 per cent.

Market operators see a roughly 70 per cent chance of another hike by July.

Poloz made his remarks when pressed by one senator about what she called the bank's "fairly rosy" outlook that it issued on April 18.

"For the economy as a whole, it has put the adjustments to the oil price shock behind us, but we still have softness in several areas of the country," added Poloz.

In his opening statement, Poloz reiterated that while higher interest rates would likely be warranted over time, some policy accommodation was still required to keep inflation on track.

As it prepares to raise rates, the bank says it is closely watching near-record levels of consumer debt.

"Of course there are risks in moving too quickly - people have a lot of debt," Poloz said. "The last thing we ... want to do is to cause a financial stability risk to be more significant by moving too quickly."

Poloz, saying he was "much more encouraged" about the economy than he had been when he last talked to the committee in November 2017, did note businesses were concerned about Canada's perceived lack of competitiveness and uncertainty over talks to update the NAFTA trade pact.