Canada’s economy showed surprising strength in the final two months of 2020, even amid a new wave of COVID-19 restrictions.

Gross domestic product expanded 0.7 per cent in November from a month earlier, Statistics Canada reported Friday in Ottawa, easily beating the 0.4 per cent forecast of economists in a Bloomberg survey. A preliminary estimate from the agency shows GDP grew 0.3 per cent in December, defying expectations for a contraction.

Friday’s report shows unexpected resilience, mostly from a jump in resource production, even in the face of measures taken to contain a second wave of COVID-19. Growth in the fourth-quarter came in at about 8 per cent annualized, according to Bloomberg calculations, well above the 4.8 per cent pace projected by the Bank of Canada.

“Outside of sectors specifically affected by the virus, the economy appears to faring well,” Royce Mendes, an economist at Canadian Imperial Bank of Commerce, said in a report to investors. “That said, the economy will only be able to outrun the second wave of the virus for so long.” 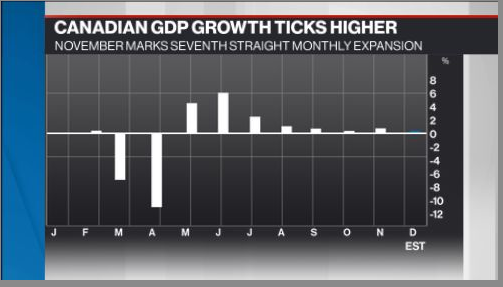 Economists in a Bloomberg survey forecast a 0.6 per cent contraction in the first quarter.

The numbers, which are preliminary for the quarter, suggest Canada’s economy also outperformed that of the U.S. to end 2020. The U.S. recorded a 4 per cent annualized gain for the three-month period.

Canadian economic activity for all of 2020 appears to have dropped 5.1 per cent, according to the preliminary estimates.

While that’s also better than analyst expectations, it’s a bigger hit than the U.S.’s 3.5 per cent contraction.