Canada’s economy stalled in December as the nation got hit with fresh lockdowns, though the slowdown wasn’t enough to prevent a strong finish for 2021.

Gross domestic product was little changed during the month, Statistics Canada reported Tuesday from Ottawa. But that followed strong gains of 0.8 per cent and 0.6 per cent in October and November, respectively. Overall for the fourth quarter, the statistics agency said preliminary estimates show the economy grew by 1.6 per cent, or an annualized pace of more than 6 per cent.

The report shows the extent to which economic conditions were strong in the final weeks of 2021, before the country was hit by a new wave of COVID-19 cases and new restrictions to contain the omicron variant.

“That seems like a pretty healthy number for the fourth quarter,” Veronica Clark, an economist at Citigroup Global Markets Inc. in New York, said in a BNN Bloomberg interview. “Very healthy growth for the end of the year.” 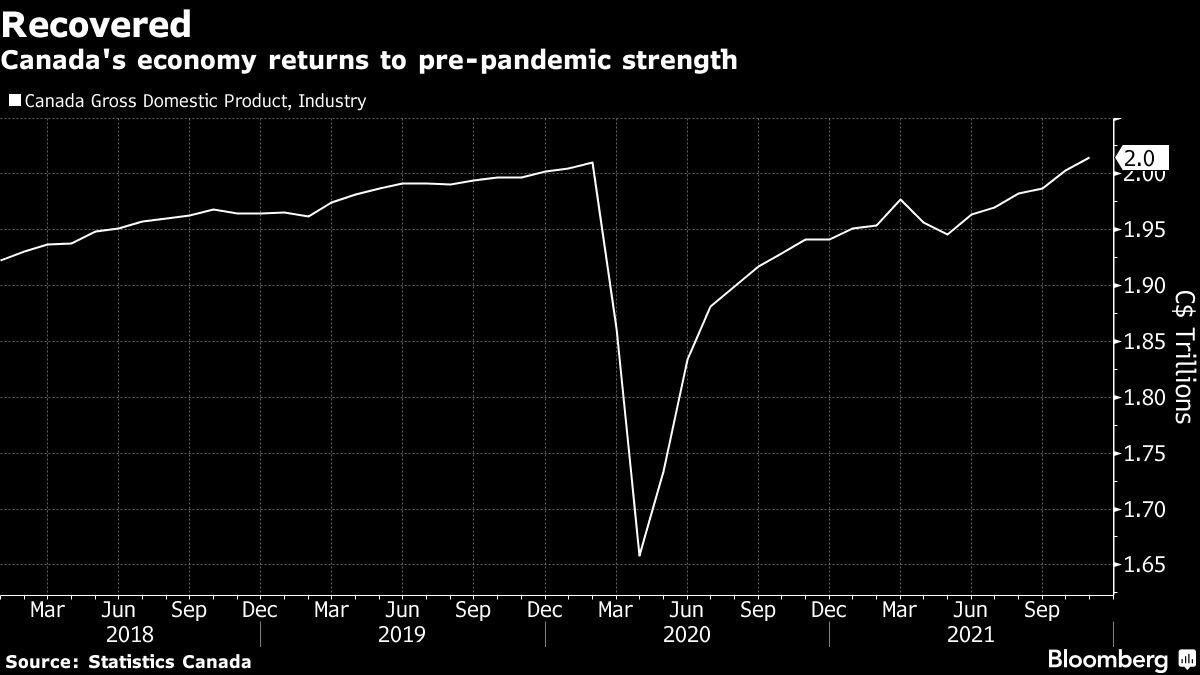 Fourth-quarter output appears to be stronger than the Bank of Canada’s recent estimate of 5.8 per cent annualized growth, and will only reinforce investor views that the central bank is about to begin a series of interest rate increases.

At a policy decision last Wednesday, policy makers led by Governor Tiff Macklem said their estimates show the economy has recouped all its pandemic loses and is running up against full capacity. Tuesday’s data will only reinforce that, with the report showing output has finally surpassed where it was in February 2020, before the start of the pandemic.

The impact of the omicron COVID variant is expected to slow the recovery at the start of 2022, though that too is seen as a temporary hiccup, according to the Bank of Canada’s latest economic outlook.

“The sturdy growth in the days just prior to the spread of Omicron show, yet again, how the Canadian economy can rebound forcefully when it is allowed to re-open,” Doug Porter, chief economist at Bank of Montreal, said in a report to investors.