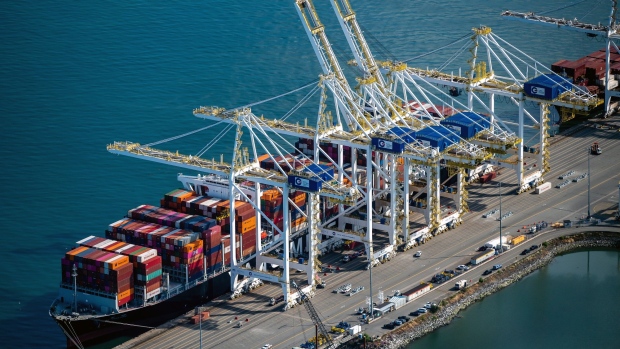 (Bloomberg) -- Canada’s economy is gearing down rapidly after stronger-than-expected growth in the third quarter, potentially giving the central bank leeway to slow its interest rate increases.

Preliminary data show gross domestic product was flat in October, Statistics Canada reported Tuesday in Ottawa. That followed a 0.1% gain in September, in line with the median estimate in a Bloomberg survey of economists.

September’s expansion brought third-quarter annualized growth to 2.9%, down from a revised pace of 3.2% in the second quarter. The increase, which nearly doubled economist expectations, was driven an 8.6% gain in exports. Government consumption and inventories also provided support.

“The underlying details don’t paint a very strong picture,” Royce Mendes, head of macro strategy at Desjardins Capital Markets, said in a report to investors. “Moreover, the monthly data suggest that the economy began the fourth quarter on weak footing.”

The sharp slowdown in momentum may allow the Bank of Canada to start winding down its rate hiking cycle, and the data potentially signal the start of the soft landing that Governor Tiff Macklem and his officials are trying to engineer.

Another welcome sign for the central bank is a possible slowdown in wage and salary pressures. Employee compensation rose 1.2% in the third quarter, the weakest growth since 2020, when it declined sharply amid Covid-19 lockdowns.

“Some early signs that broader inflation pressures have started to ease, and indications that domestic demand is softening, mean the Bank of Canada could be close to the end of the current interest rate hiking cycle,” Nathan Janzen, assistant chief economist at Royal Bank of Canada, wrote in a note to investors.

Economists in Bloomberg surveys were expecting third-quarter growth of 1.5% annualized, followed by 0.5% in the final three months of the year. Two quarters of contraction are seen in the first half of 2023.

The Bank of Canada has already begun slowing down its pace of rate hikes, after increasing the benchmark overnight lending rate to 3.75% from the emergency pandemic low of 0.25% that held until March.

Rapidly slowing housing activity dragged on Canadian growth for a second consecutive quarter, with residential construction and investment down 15.4%.

Overnight swaps markets are fully pricing in a 25 basis-point hike for the Bank of Canada’s Dec. 7 decision, with traders putting about a one-third chance on a 50 basis-point move.

(Updates with second chart and other details.)