We're a hair away from pre-pandemic growth levels: Chief economist

Canada’s economic growth unexpectedly faltered at the end of the third quarter, casting doubts on the strength of the nation’s recovery.

Gross domestic product was little changed in September, according to a preliminary estimate from Statistics Canada released Friday, while the expansion was a less-than-expected 0.4 per cent in August. Overall for the third quarter, the economy grew by 0.5 per cent, or an annualized pace of around 2 per cent.

The data could cast doubt on the Bank of Canada’s ability to start a cycle of interest rate increases early next year, as investors are anticipating, to combat rising inflation. It’s a disappointing result, even from recently downgraded estimates for the three-month period, after an even weaker first half of the year.

“It’s one piece of evidence on the side of a less aggressive tightening cycle next year,” Avery Shenfeld, chief economist at Canadian Imperial Bank of Commerce, said in a report to investors.

Canada’s currency fell 0.4 per cent to $1.2389 per U.S. dollar at 9:03 a.m. in Toronto trading, paring all of its gains since the Bank of Canada accelerated its timeline for potential rate hikes on Wednesday. 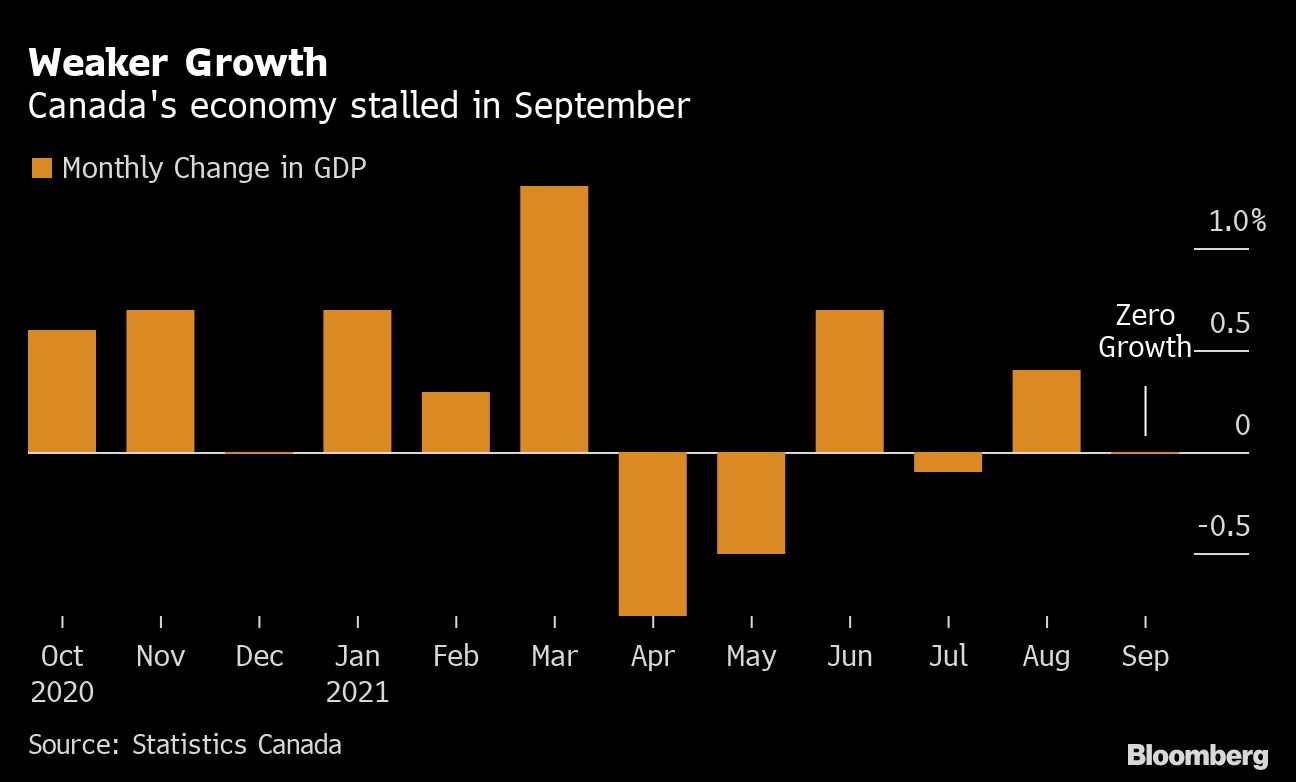 In its policy decision, the central bank pared back its growth forecasts for the third quarter to 5.5 per cent, even as it ramped up its estimates of inflation. Economists were anticipating 4 per cent annualized growth for the three-month period, according to the median estimate in a Bloomberg survey this month.

Friday’s report suggests the supply chain disruptions that have been intensifying in recent months are significantly weighing on the trajectory of Canada’s economic recovery. September’s stall was led by drops in retail and manufacturing, according to the statistics agency. For August, global supply chain issues also held back sales of furniture and motor vehicles.

While economists largely expect the supply chain disruptions to ease in coming months, there’s more uncertainty on how long they will last.

Canada isn’t alone. U.S. economic growth in the third quarter slowed to the softest pace of the pandemic recovery period amid supply disruptions. GDP grew at a 2 per cent annualized rate following a 6.7 per cent pace in the second quarter, the Commerce Department’s preliminary estimate showed Thursday.