Over 10% of U.S. jobs added in October were in warehousing, transportation: Professor

Canada’s labor market continued to heal in October as retail businesses ramped up hiring, though the pace of gains has begun to cool.

The economy added 31,200 jobs last month, Statistics Canada said Friday in Ottawa, missing expectations for a gain of 41,600 in a Bloomberg survey of economists. The unemployment rate fell to 6.7 per cent from 6.9 per cent in September, and total hours worked rose 1 per cent.

The report signals the economic rebound is intact, with companies finding workers as COVID-19 restrictions vanish. Yet, the data also illustrate how future job gains will return to more normal levels -- which averaged 23,000 per month in the two years prior to the pandemic -- as labor slack diminishes.

Canada’s currency was little changed after the report, trading at about $1.2445 per U.S. dollar at 9:32 in Toronto trading. Bond reaction was also muted, with the yield on Canada’s two-year benchmark falling one basis point to 0.97 per cent. 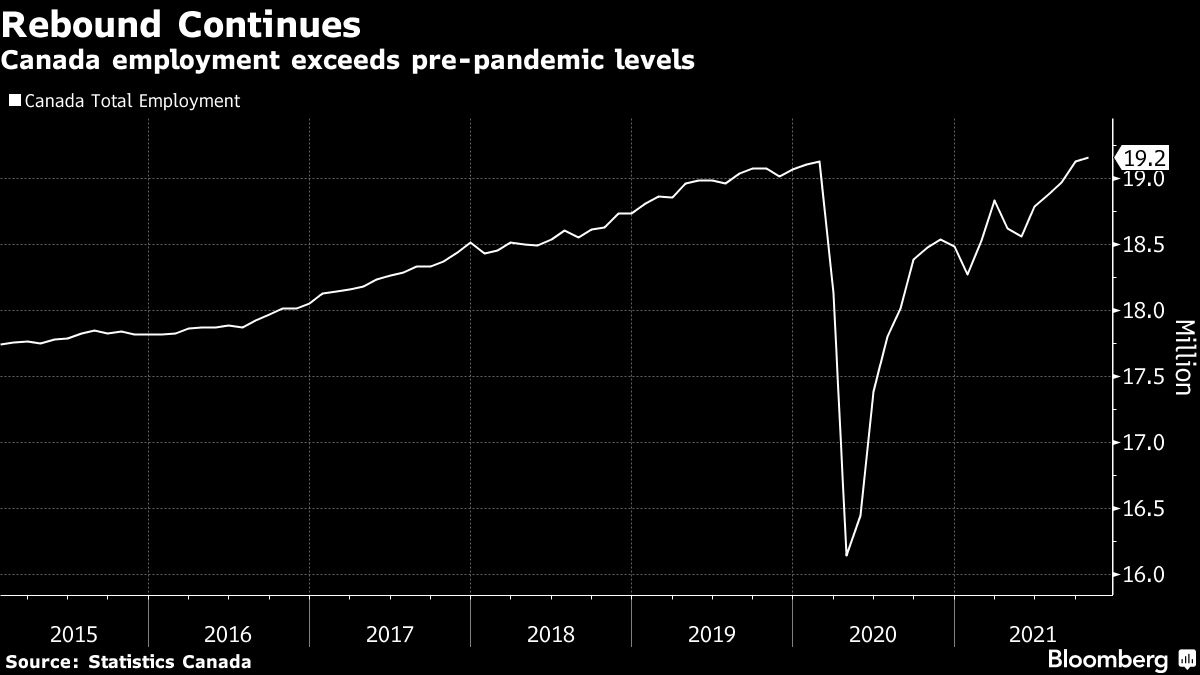 The number of Canadians in the labor force actually shrank by 25,000 in October, according to the report. The bulk of the gains last month were in the pandemic-exposed retail sector, which returned to pre-pandemic employment levels with a net gain of 72,000 jobs.

Elsewhere, gains stalled. Employment in goods producing industries was down by 6,200. Public administration also posted a decline, after jumping in September due to a federal that necessitated the temporary hiring of poll workers.

All the gains in September were in full-time employment. Average hourly wages for permanent workers were up 2.1 per cent from a year earlier, suggesting the impact of rising consumer price inflation has yet to drive pay gains higher. That should give some comfort to policy makers at the Bank of Canada, who argue broader price pressures aren’t likely to trigger a labor cost spiral.

“Wages are still tepid,” Jimmy Jean, chief economist at Desjardins Securities Inc., said by email. “It will leave the Bank of Canada unimpressed and comfortable in the idea that we’re not yet on the verge of massive wage cost pass-through to inflation.”

Canada’s labor market had been on tear since emerging from a third wave of COVID earlier this year, generating 600,000 new net jobs since May that has brought employment beyond pre-pandemic levels.

Those gains prompted the Bank of Canada to pare back its stimulus efforts at a policy decision last week. Employment is about 30,000 higher than it was in February 2020, after the nation lost 3 million jobs at the start of the pandemic.

Policy makers led by Governor Tiff Macklem still contend slack remains in the economy, given the labor force has grown since the crisis hit. The jobless rate is also about a percentage point above pre-pandemic levels.