Biden's push for EV revolution is a 'win' for Canada: Policy strategist

Approaching Toronto on a typical Friday evening, Highway 401, the major artery connecting  the Windsor-Detroit border with Canada’s largest city, is more often than not jammed. Pick-up trucks pulling campers or towing snowmobiles, SUVs crammed with tents or skis, and bumper-to-bumper tractor-trailers in the slowest lane of the world’s widest highway resembling a train. It’s enough to make an environmentalist weep.

Canada for years has danced around the global electric vehicle transition, touting its environmental importance while simultaneously propping up traditional auto manufacturing and defending its oil sands industry.  But several recent developments suggest the shift to EVs is gaining traction. The combination of Joe Biden’s presidency in the U.S., coupled with a Democratic-led Congress and pandemic-loosened purse strings in Canada, could jump-start the change — helped by a big boost from industry.In the past six months, three global automakers have announced big electric vehicle investments in Canada’s most populous province.

General Motors Co. said on January 15 that it will invest nearly $1 billion to produce electric commercial vans in Ingersoll, Ontario. Ford plans to spend roughly $1.2 billion to begin building five battery-powered cars in Oakville, Ontario, from 2025. And in fall 2020, Fiat Chrysler said it would invest as much as $1.5 billion to create its own electric vehicle platform in the province.

The announcements were hailed by the union representing more 20,000 autoworkers at the three companies, as was the promise of close to $600 million in provincial and federal government funding for the Ford plant. (GM and Fiat Chrysler are still in discussions with both governments for support).

“This level of cooperation and support for the auto industry’s transition to zero-emissions vehicles shows that as a nation we are taking a global leadership role in the development and manufacturing of electric vehicles,” Unifor President Jerry Dias said in a statement following the Ford deal. 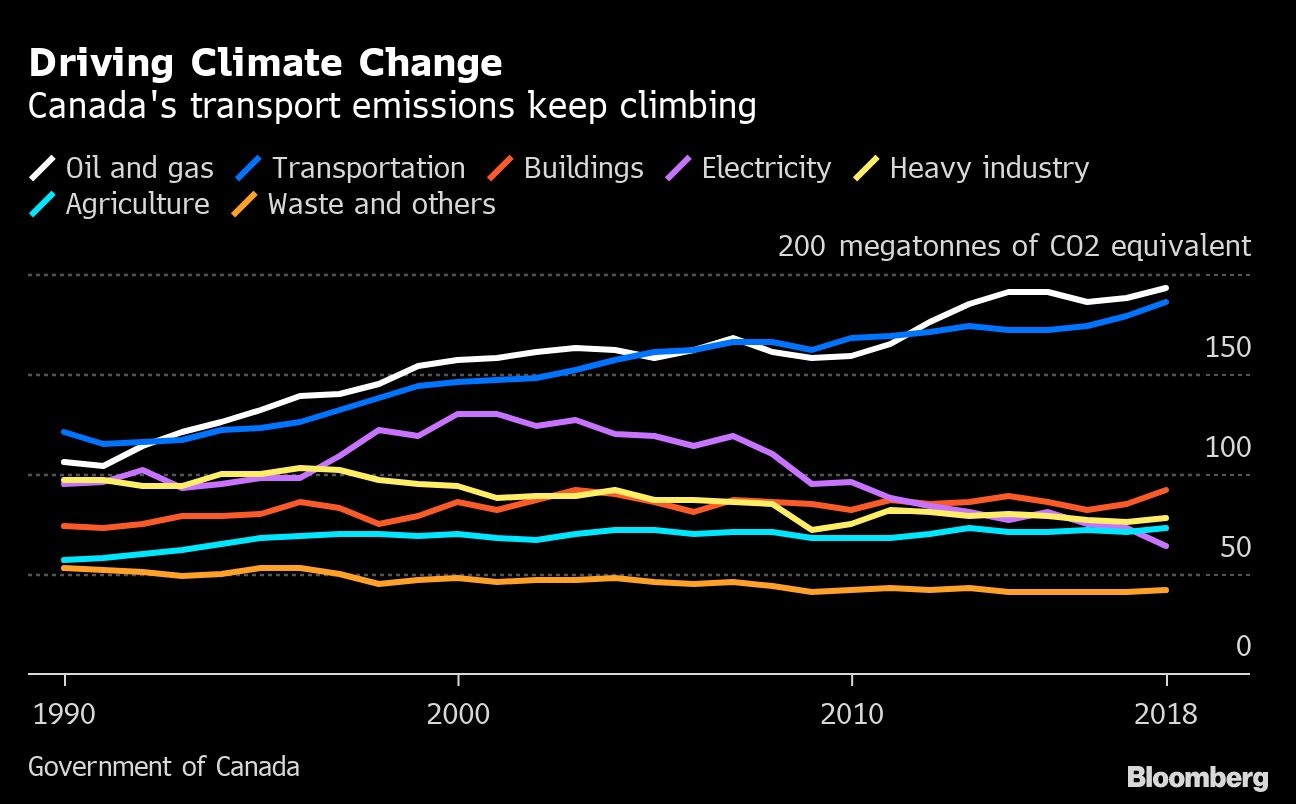 There’s not a moment to waste. Transportation runs neck-and-neck with oil and gas as the biggest producer of greenhouse gas emissions in Canada.

Canadians are addicted to gas guzzlers, one of the reasons they produced almost 20 tons of GHG per person in 2018, more than those living in all but four of the world’s top 20 GHG emitters. Geography works against the country: Distances are vast, temperatures extreme and the population small. If it weren’t for an abundance of clean hydroelectric power from massive water resources, Canada’s domestic emissions would be far worse. Factor in emissions generated outside Canada when the fuel extracted and exported from its oil sands is actually burned, and its carbon footprint gets bigger still.

In a country where 100 kilometer commutes in sub-zero temperatures are not unusual, and people drive three-hours to weekend cottages, concerns about the reliability and range of EVs have been a major impediment to greater adoption. “The opportunity is immense,” says Scott Bell, chief executive officer of GM Canada, of the potential market for electric vehicles in Canada. Less than 3 per cent of new vehicles sold in Canada today are electric, similar to levels of demand seen in the U.S. “We certainly see the opportunity to transform that entire fleet to electrification over time.”

While a zero-emissions future is core to GM’s strategy — just this week it announced its global operations and vehicles will be carbon neutral by 2040 — pickup trucks now account for 40 per cent of its sales in Canada, and the company can’t afford to ignore that market. The national devotion to big vehicles only gained strength during the pandemic, as consumers opted for hefty vehicles that could tow campers and boats on in-country vacations. Even as Ford and Chrysler Fiat announced their plans for consumer EVs, GM resurrected a largely shuttered plant in Oshawa, Ontario, pledging to return to building traditional Chevrolet Silverado and Sierra pickup trucks powered with internal combustion engines.

“We’re playing on both ends here,” Bell acknowledged, “but the end game is to get to 100 per cent EV.” Still, boosting Canada’s EV penetration to 25 per cent to 30 per cent by the end of the decade would be “a big move,” Bell says, and it will likely take a further decade to reach full adoption.

Profits from ICE vehicles will help fund the company’s broader EV ambitions. Eventually, the Oshawa plant, along with the rest of GM’s footprint in Canada, will convert to EV production, he says. GM’s global chief executive officer, Mary Barra, has said 40 per cent of U.S.-produced models will be battery-powered by the end of 2025.  But manufacturing electric vehicles in Canada is just one step on the road toward zero emissions. Electric motors — whether powered by hydrogen fuel-cells or electric batteries — require new infrastructure, metals and materials, technology, and clean power to be truly green.

The good news is that this creates potential for a raft of new jobs just as Canada faces growing international pressure to abandon oil sands production. From October 2014 to October 2020, the oil and gas extraction sector shrank by almost 15 per cent, or about 9,000 jobs. One of U.S. President Joe Biden’s first steps in office — the cancelation of the Keystone XL oil pipeline project — led TC Energy Corp. to immediately slash 1,000 jobs on both sides of the border.

“The thing about transportation, in the context of Canada, is that this isn't just an emissions reduction plan; it’s also an economic plan,” said Sarah Petrevan, policy director at Clean Energy Canada. The federal government has said there could be US$70 billion to US$100 billion in additional stimulus spending over the next three years. Petrevan says dedicating a hefty chunk of that to clean up the transportation sector would be money well-spent.

With his December announcement of an aggressive hike to the country’s carbon tax, Prime Minister Justin Trudeau has promised that Canada will meet or exceed its goal to cut emissions by 30 per cent from 2005 to 2030. The widely hailed measure could help redeem Canada’s sooty reputation abroad. What’s less clear is how much it will spill over to transport, or how much future spending might be aimed at cleaning up the sector. Smaller targeted measures such as continuing to offer rebates to consumers who buy zero-emissions vehicles, and putting up US$150 million to build charging and refueling stations, are helpful but not transformative, Petrevan said. What’s needed are funding and policies to support the entire value chain, from batteries to car assembly.

As the pandemic unleashes a flood of stimulus spending, the potential to restructure economies around zero-emissions goals has grown. To date, more than two dozen countries have directed nearly a trillion dollars in stimulus toward a green recovery, according to Bloomberg New Energy Finance’s COVID-19 Green Policy Tracker. EU leaders have pledged at least US$717 billion to green sectors. Germany, France and South Korea have used stimulus funds to launch ambitious climate programs that will reshape their economies for generations.

By comparison, the largest part of Canada’s US$15 billion green stimulus plan announced in December is focused on energy-efficiency measures BNEF believes are unlikely to have substantive impact on emissions — though they will likely create jobs.

Meanwhile, Biden is hoping to push some version of a sweeping new green energy stimulus plan through Congress, to transition the United States to net-zero carbon emissions by 2050. In the weeks after the November election, speculation that Canada could work with the U.S. on cross-border solutions to speed adoption of zero-emissions vehicles picked up. The expectation is that Biden will push for a host of measures, including stronger fuel-efficiency requirements and a higher social cost for carbon, and pressure Trudeau to follow suit.

“We now have a president who is much more aligned with not only my own values as prime minister but also the values of Canadians,” Trudeau said at a news conference January 22 following Biden’s decision to cancel the Keystone XL pipeline.

Dean Stonely, CEO of Ford Canada, said the most helpful transportation policy Canada’s Liberal government could produce would be a “harmonized standard for all of North America.” Government support, such as the almost US$600 million offered to Ford in Ontario, and more consistent policies among Canadian government agencies will also be crucial, he said.

Uneven subsidies have made EVs more affordable in some provinces than others, leading to inventory disparities. This will even out as the technology continues to develop. A recent report from Bloomberg NEF notes that falling battery prices will push EV and ICE vehicles to price parity by the mid 2020s, eliminating the need for subsidies.

Trudeau’s most substantive environmental policy, hiking the national carbon tax, aims to foster green innovation across sectors by driving up the cost of carbon emissions for business. 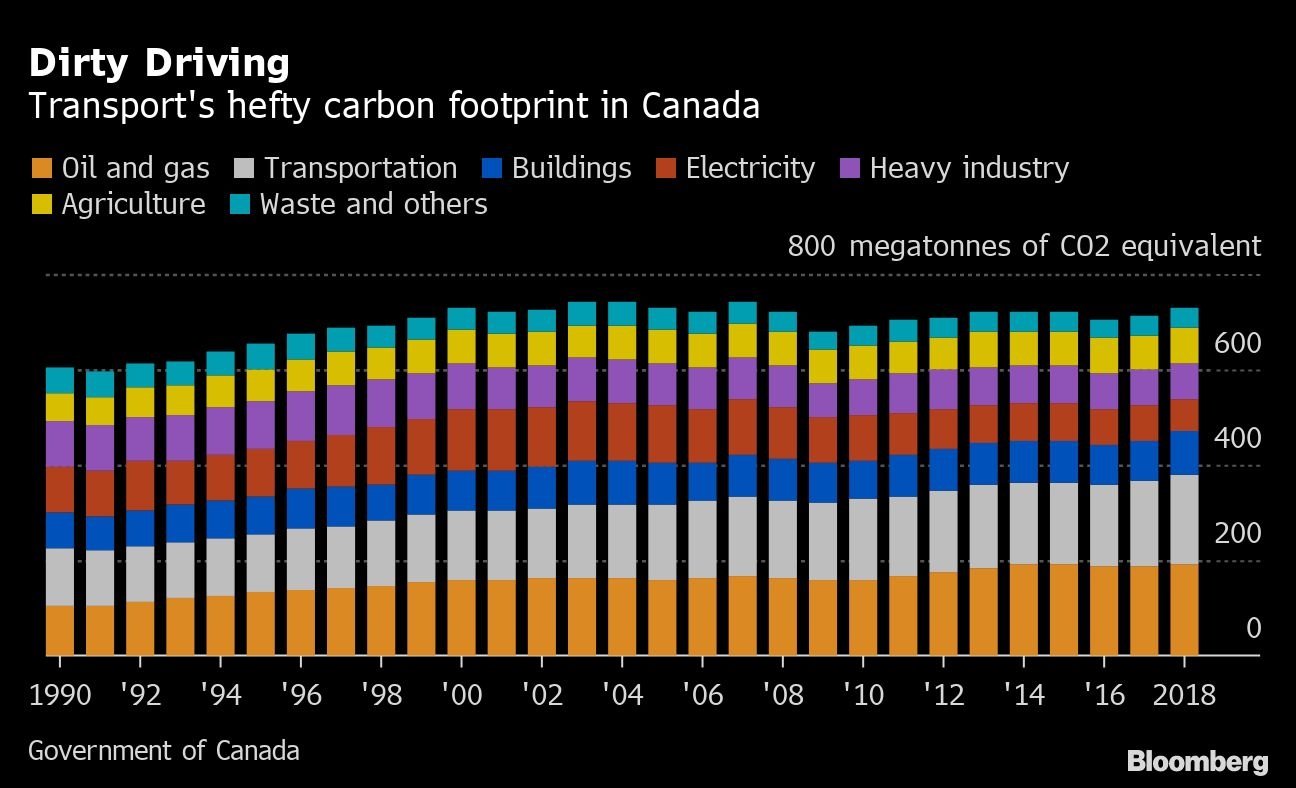 “For the first time, Canada has a credible plan to meet its 2030 climate commitments,” said Richard Florizone, CEO of the International Institute for Sustainable Development, a Winnipeg-based think tank. What the country has yet to see, he said, is the kind of “activist industrial policy” that has gained favor among many governments during the pandemic.

Having pledged a comparatively modest $15 billion, to date, for green investments in its recent environment plan, Finance Minister Chrystia Freeland has hinted that the government could spend a further $70 billion to $100 billion on pandemic stimulus.

“We’re going to have to spend,” said Florizone. “Why don’t we spend in ways that will lay down the track for the economy of the future?”