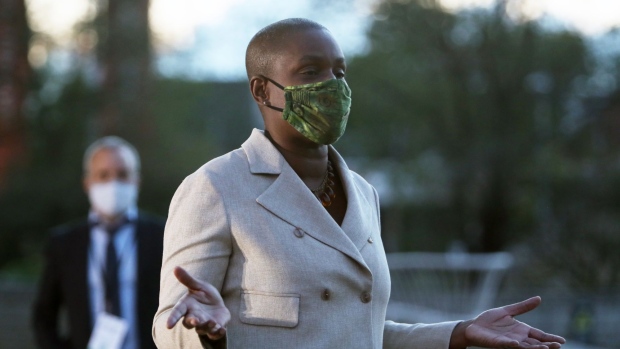 Annamie Paul arrives at an election debate in Gatineau, Quebec on Sept. 8. , Bloomberg

(Bloomberg) -- Annamie Paul, the first Black person to lead a major national political party in a Canadian election campaign, is calling it quits after her Green Party suffered a significant drop in support in the Sept. 20 vote.

Paul announced her decision at a Toronto news conference on Monday, a week after she failed to win her seat in an election that returned Prime Minister Justin Trudeau to power for third term. She came in fourth in her Toronto district; the Greens won two seats and saw their share of the national vote drop to about 2% from 6% in the 2019 election.

Paul, who won the race to replace long-serving leader Elizabeth May in October 2020, faced internal strife over party policy on Israel and the Palestinians in May. One of the Green lawmakers involved, Jenica Atwin, later defected to the Liberals and was re-elected under that party’s banner last week.