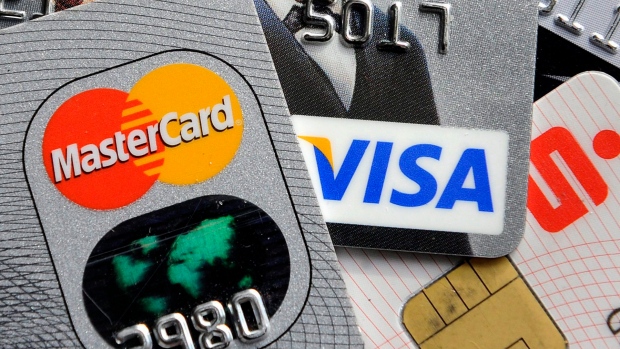 OTTAWA -- The amount Canadians owe relative to their income hit a new high in the third quarter.

Statistics Canada said Thursday that household credit market debt as a proportion of household disposable income increased to 171.1 per cent, up from 170.1 per cent in the second quarter.

That means there was $1.71 in credit market debt, which includes consumer credit and mortgage and non-mortgage loans, for every dollar of household disposable income.

"And, with homebuyers rushing to get into the market ahead of the new OSFI rule change that takes effect on Jan. 1, 2018, we could see a further increase in Q4," Reitzes wrote in a report.

"However, that suggests we could see some flattening out of the ratio in 2018 -- though don't bet on it as housing has been persistently resilient."

Household debt is often cited as a key risk to the Canadian economy by the Bank of Canada and others.

"A disorderly correction would adversely impact growth and could threaten financial stability," the organization said.

Statistics Canada said the household debt service ratio, measured as total obligated payments of principal and interest as a proportion of household disposable income, was relatively flat at 13.9 per cent, while the interest-only debt service ratio was 6.3 per cent, down from 6.4 per cent in the previous quarter.

The Bank of Canada has raised its key interest rate target twice this year, moves that have led to increases in the prime rates at the country's big banks used to set loans like variable-rate mortgages.

"However, the prevalence of fixed rate mortgage debt means households won't feel the increase all at once," Nye wrote.

"Rather, as today's data showed, the debt service ratio is likely to rise only gradually."

Total household credit market debt grew to $2.11 trillion in the third quarter, up 1.4 per cent from the previous quarter. The increase came as mortgage debt increased 1.5 per cent to $1.38 trillion, while consumer credit rose 1.2 per cent to $620.7 billion.

Meanwhile, the total net worth of the household sector edged down 0.1 per cent to $10.61 trillion in the third quarter.

The move lower was due to a drop in home values as housing resale prices weakened. The value of household financial assets edged up 0.1 per cent.