The low interest rate loans that are helping propel one of the world’s frothiest property markets could also be what make it burst.

For 12 consecutive years, Canada’s housing market has soared to record heights. Tight inventory, particularly in Toronto and Vancouver, has made property price appreciation and bidding wars among the most aggressive anywhere.

This has pushed Canadians into playing a very dangerous game. To hold down the size of their monthly payments as home values continue to rise, record numbers of mortgage applicants are opting to take out loans that offer the lowest initial interest rates. The problem with these loans, known as variable-rate mortgages, is that their rates automatically rise along with the country's benchmark borrowing cost. And by all indications it's about to go up — potentially by a lot. Bank of Canada policy makers are expected to lift the rate from 0.25 per cent at a meeting on Jan. 26 to quell soaring inflation and to then follow up with several more hikes over the course of the next two years. 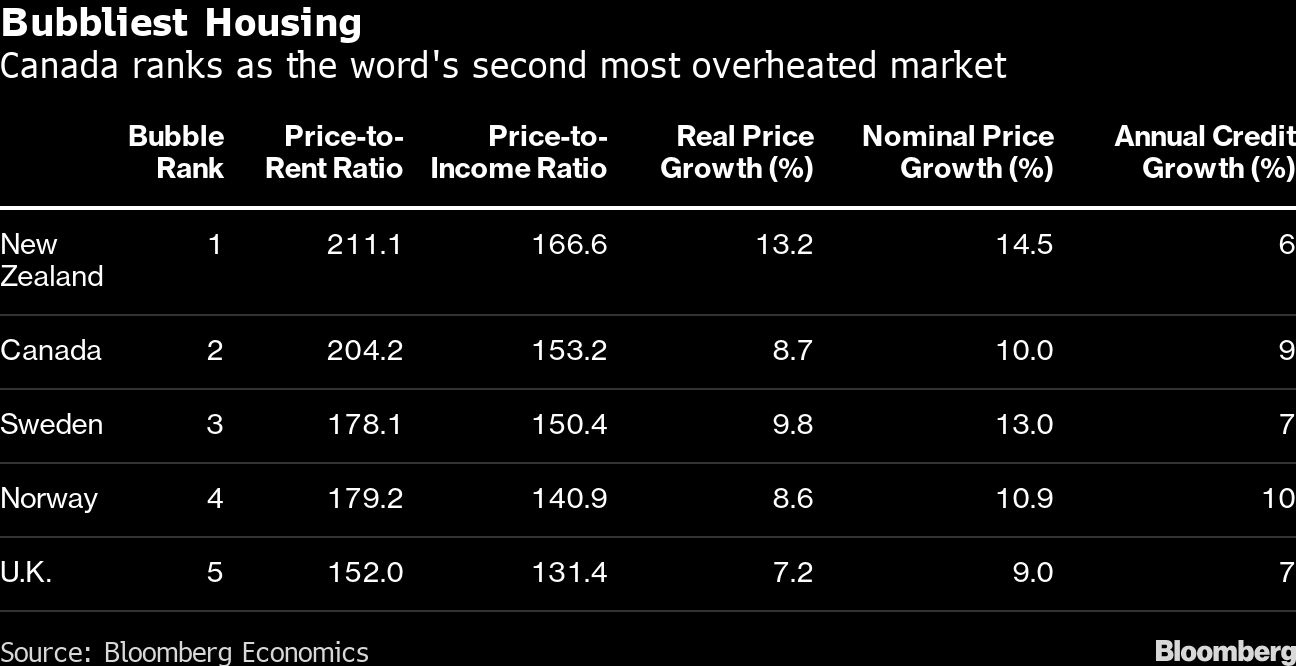 An increase of more than one percentage point in the central bank rate — traders in Toronto are expecting a point and a half — would backfire on homeowners, driving the cost of their mortgages above that currently offered on conventional fixed-rate loans. To old hands in the housing market, the elements at play here — overstretched buyers suddenly hit with surging borrowing costs — are a cocktail for trouble. And while predicting a crash in the Canadian housing market has been an embarrassingly bad idea for two decades now, some are mustering the courage to raise the specter anew.

“If the Bank of Canada goes at least as far as what the rates market has priced in, you’re going to have arithmetically at least a 25 per cent plunge in residential real estate values,” said David Rosenberg, an economist who predicted the 2008 U.S. housing crash and now runs his own analytics firm, Rosenberg Research & Associates Inc.

If anything, he says, the market may be underestimating, not overestimating, the number of rate hikes that could be coming if the Bank of Canada panics in the face of the fastest inflation in 30 years. “There’s a greater risk that they over-tighten, and they might over-tighten by even a couple of rate hikes.”

The concern isn’t that Canadian homeowners will be underwater on mortgage payments — which is what triggered mass defaults and foreclosures in the U.S. in 2008. When rates rise, most floating-rate loans in Canada allow borrowers to keep their monthly payments the same and just pay down less principal to make up for the higher interest. And as fears of a housing bubble have grown, the government has imposed an added layer of protection in the form of a stress test, ensuring new borrowers have enough income to handle higher interest payments.

It’s investors, whose participation in the housing market has grown faster than any other kind of buyer, who are more likely to sell, said Rosenberg. As of mid-2021, investors accounted for a fifth of all homes purchased in Canada, according to the most recent data from the central bank.

Investors look at their properties as a source of profit, so they may have fewer qualms about selling than owner-occupiers when the economics turn less favorable, research by the Bank of England has suggested. Plus, the greater proportion of debt investors carry relative to their income may make them even more sensitive to changes in interest rates, according to research from the Bank of Canada. And in late 2020, about 40 per cent of investors were only breaking even — making that group completely reliant on price appreciation to earn a return, according to an informal survey of investment-property owners by Toronto's Veritas Investment Research.

Taken together, this may mean even investors who passed the government’s stress test decide it’s just not worth their while if rates actually rise.

“The investors tend to be leveraged up to the eyeballs,” Rosenberg said. “That’s where the selling is going to initiate, but it will spread like dominoes.” 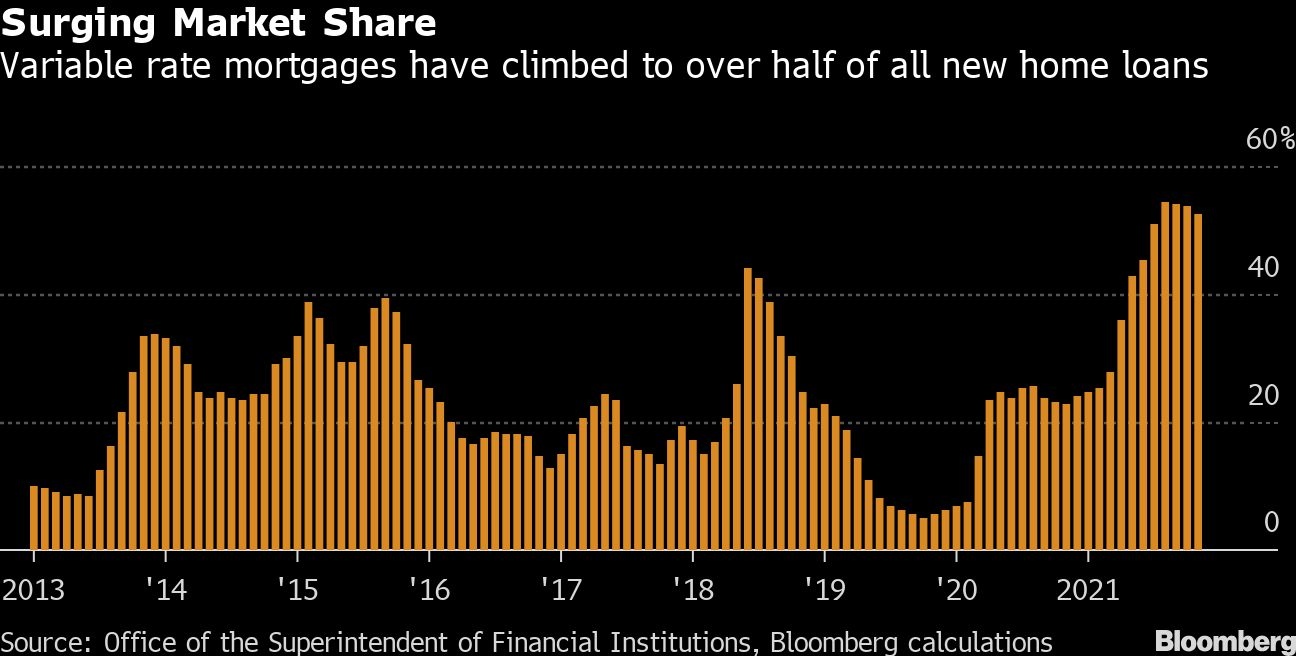 But investors, average homebuyers and mortgage brokers alike don’t seem to believe that the Bank of Canada will actually raise interest rates significantly.

Vlad Maevskiy, a housing investor who owns about 17 properties around Southwestern Ontario and just got a variable-rate mortgage in August, says if the past is any indication, things will be fine.

The Bank of Canada hasn't had a policy rate higher than 1.75 per cent since before the 2008 financial crisis, with rate-tightening cycles tending to be both brief and shallow. And as the pandemic still rages across the country, Maevskiy sees plenty of reason for the central bank to keep borrowing costs low.

Variable-rate loans are always cheaper than fixed mortgages, but now that the discount is the biggest it’s been in a decade, it’s tough for Canadians to pass up.

Borrowers can save in excess of one percentage point in interest each month by opting for variable rates instead of fixed. That’s because fixed-rate loans are priced off government bonds so they move with the the financial markets — which, according to Bloomberg calculations, have already priced in six increases, or a percentage point and a half of higher borrowing costs.

So now, if a borrower puts 20 per cent down on a $1 million (US$799,000) house — about the average price in Vancouver and Toronto — and takes out a floating-rate loan, they could save about $8,000 in interest payments in their first year if rates stay put. Canadians seem to like those odds.

Floating-rate mortgages accounted for more than half of all home loans issued by banks in Canada in each month from July to November, according to the most recent data from the country’s banking regulator. They’ve never accounted for more than 50 per cent of new mortgages for even one month in those records, which go back to 2013, let alone five in a row. In contrast, adjustable-rate mortgages accounted for only about 3 per cent of new mortgage applications in the U.S. in November, according to that country’s Mortgage Bankers Association.

Now, in Canada, floating-rate mortgages account for $372 billion, or a record 27.2 per cent, of banks’ outstanding residential loans. 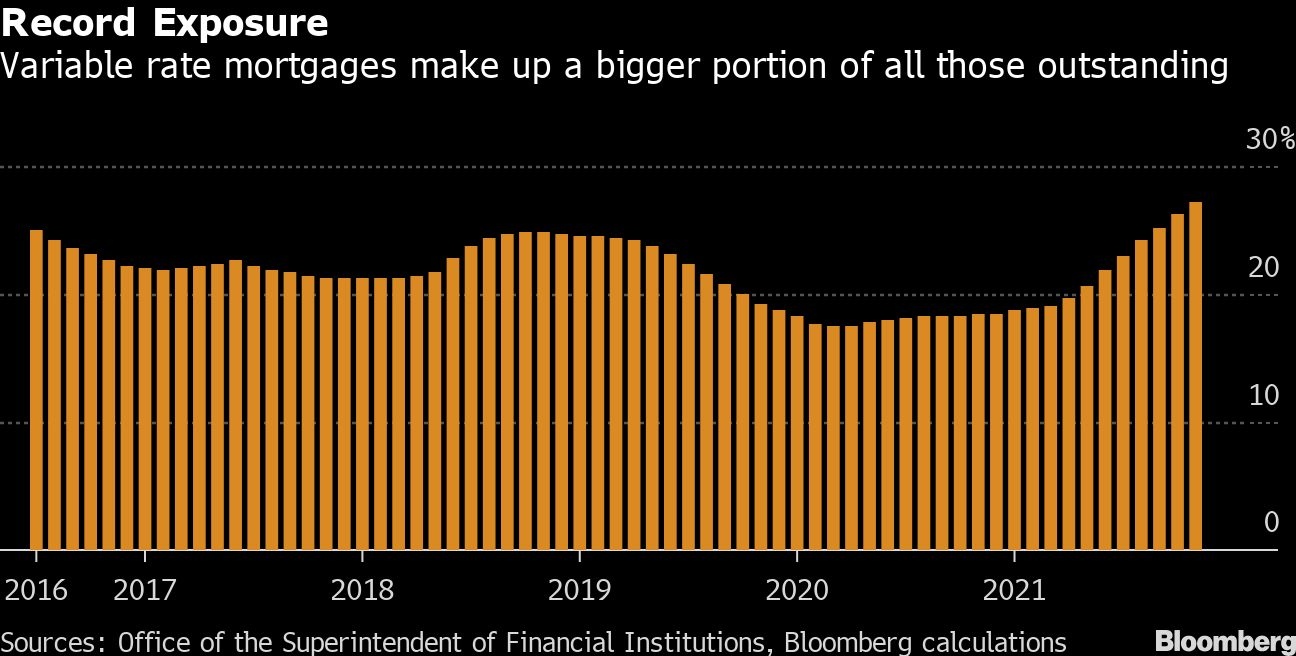 As long as the Bank of Canada sticks to no more than four rate hikes of a quarter-point each, borrowers with floating-rate mortgages will still be saving money — and that’s what they’re betting on.

“It’s bluffing,” Jeff Evans, a Vancouver-based mortgage broker who has been directing about 80 per cent of his clients to variable-rate mortgages said of the central bank raising rates. “They’re not really in an economic position to do the things that they’re threatening.”

But if the traders are right, some borrowers could be caught unprepared.

Last month, Lori Babyk, a 48-year old product manager at an industrial supply company, spent just shy of $1 million on a townhouse in the Toronto suburbs. The low rate on her variable-rate mortgage, just 1.35 per cent, was a help given the sticker price.

“With where I am now and where my monthly payments are, I can live fairly comfortably and not have to worry,” she said. “If things went much higher I’d have to be a lot more concerned with what’s coming in and what’s going out.”

If rates do rise, Babyk says she would cut spending elsewhere and continue paying down her loan to make sure she can be mortgage-free by the time she retires. The danger for the Canadian economy would be if the millions of homeowners who’ve piled into variable-rate mortgages all engage in the same belt-tightening at the same time. Such a hit to aggregate consumer spending could end up putting some people out of work, and if Babyk became one of them, she says keeping up with rising mortgage payments might become tough.

“I wanted to take advantage of what I could now,” Babyk said of opting for her floating-rate mortgage over fixed. “I keep telling myself, at the end of the day, I can sell.”