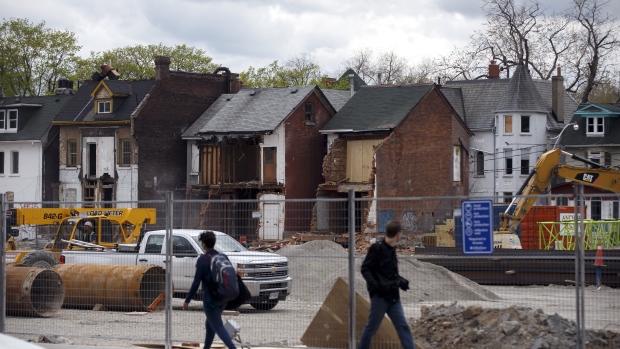 Pedestrians walk past construction as homes are demolished in downtown Toronto, Ontario, Canada, on Thursday, May 10, 2018. , Cole Burston/Bloomberg

Canada’s once-lofty housing market is achieving a best-case soft landing for policy makers trying to cool things down without triggering a collapse.

The latest string of data indicates the market is experiencing only a modest adjustment in prices in the face of higher interest rates and tougher regulations brought in to tackle a boom that saw values more than double in Toronto and Vancouver since 2009.

It’s a Goldilocks scenario that reduces risk in what had become the economy’s main vulnerability -- an impressive achievement only a year after the country suffered a crisis of investor confidence because of debt and housing worries.

“It’s a pretty good spot to be in, avoiding boom but avoiding bust as well,” Eric Lascelles, chief economist at Royal Bank of Canada Global Asset Management in Toronto, said in a phone interview Thursday. “The rule changes that have been made have been effective in cooling these markets down.”

Canada’s housing boom appears to have come to an end in the middle of last year, following an eight-year ascent that saw national home prices rise by nearly 80 percent. Since then, they’ve been little changed even as market transactions have fallen sharply.

To be sure, risks remain. Young home buyers have never faced anything other than historically low mortgage rates and many will have to refinance over the next few years, while policy makers remain concerned about a cluster of highly indebted borrowers.

Growing signs of a sustainable housing market allow the Bank of Canada to keep moving ahead with modest interest-rate increases in an economy that’s otherwise at full capacity. Government officials can also hold back on new interventions that could spook households.

“It looks like we’re settling into this environment in Canada where price growth is going to be flat in real terms,” something that hasn’t happened outside of a recession since the 1990s, Bank of Montreal Senior Economist Robert Kavcic said by phone from Toronto.

Prices and sales showed modest gains or losses for October in reports Thursday from the Canadian Real Estate Association and from the Teranet land registry. That’s a switch from most of the last year where they swung in response to tougher mortgage qualification rules and the first interest-rate hiking cycle from the central bank in almost a decade.

Home sales held close to their 10-year average after falling for a second month in October, the realtor group said. Benchmark prices rose 2.3 per cent from a year earlier, and gains in Vancouver and Toronto were close to the national average.

Canada would stand out if it comes through its housing boom without a crash like those seen in the U.S., the U.K. or Spain. “Overall, yes the medicine is working,” Benjamin Tal, deputy chief economist at the Canadian Imperial Bank of Commerce, said in a phone interview.

“We are reaching some sort of landing, how soft it will be I don’t know, but we aren’t in a free-fall by any stretch of the imagination,” Tal said.

Even with the latest figures showing stability, it could take years to unwind the imbalances that have built up. The rise of the million-dollar home in some of Canada’s biggest cities has also created affordability challenges for buyers as builders struggle to offer new supply.

“Its absolutely fair to say the Canadian housing market is off the boil,” Lascelles said, adding a note of caution: “There is no pre-ordained conclusion here.”