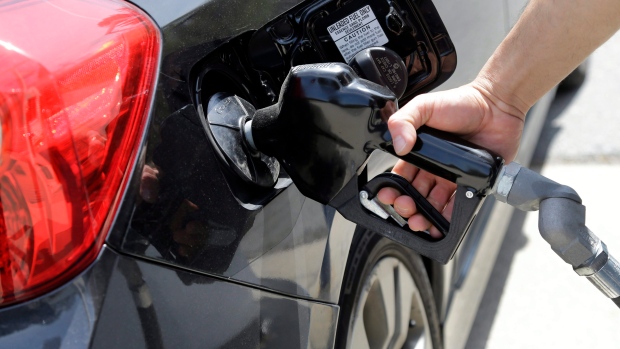 an attendant pumps gas in Andover, Mass. , The Canadian Press

OTTAWA -- The country's annual inflation rate continued to accelerate last month with a boost from higher costs for gasoline, hotels and airline tickets.

The new inflation reading Friday of 1.4 per cent brought the data point closer to the Bank of Canada's ideal target of two per cent and supported the bank's predictions that recent softness was mostly temporary.

Motivated by powerful economic growth in the first half of 2017, the inflation-targeting bank has raised its benchmark interest rate twice since July and many analysts expect it to continue along its hiking path over the next year.

The report Friday also showed two of the central bank's three preferred measures of underlying inflation, that seek to look through the noise of more-volatile items like gasoline, also increased in August.

But while many economists predicted the inflation numbers were unlikely to change the Bank of Canada's thinking when it comes to its next rate hike, some thought the latest retail-trade data, also released Friday, could encourage the bank to hold off a little longer.

Bank of Montreal senior economist Sal Guatieri said the retail sales data suggests the economy is starting to show signs of slowing after its torrid pace in the first half of 2017.

"If anything, (the figures) reinforce our view that the bank will take a more-patient approach to raising interest rates going forward after raising rates twice in two months," said Guatieri, who's predicting the next hike in January.

He doubts the consumer, which has been a main driver of Canadian growth, will be able to keep up its spending pace as interest rates and debt loads rise.

Some economists, however, believe the central bank could raise rates again next month, especially as trends point to a gradual rise in inflation.

"While volume retail sales were slow in July, this fits the Bank of Canada's narrative of a moderating domestic economy in the second half of the year," Desjardins senior economist Jimmy Jean wrote in a research note to clients.

"So long as growth cools but remains above potential, the Bank of Canada still has arguments to remove more of the 'considerable' accommodation in place."

In the inflation report Friday, the upward forces were led by year-over-year price increases last month of 8.6 per cent at the gas pump, 6.3 per cent for traveller accommodation and 6.2 per cent for air transportation.

Consumer prices rose at a faster pace in nine of the 10 provinces in August, while the pace of inflation held steady in Manitoba, the federal statistical agency said.

The pace of inflation in Saskatchewan saw the biggest acceleration of any province -- climbing to 1.7 per cent in August from 0.8 in July -- in large part due to the application of the provincial sales tax in new areas. Higher prices in Prince Edward Island last month were partly linked to sales tax increases.

The biggest contributors to the downward pressures were cheaper year-over-year prices for electricity, computers and digital devices as well as household appliances.