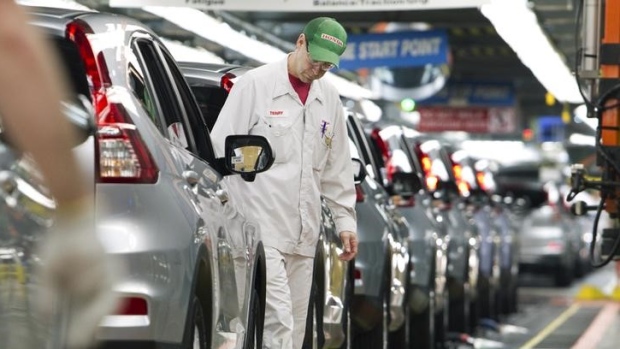 OTTAWA  - Canada's trade deficit narrowed more than expected in January as imports pulled back from a record high, but exports tumbled by the most in six months as the country shipped fewer cars and forestry products, Statistics Canada said on Wednesday.

The $1.91 billion gap was smaller than the $2.50 billion shortfall forecast by economists.

The report was likely released too late to alter the Bank of Canada's interest rate decision due at 10 a.m. ET (1500 GMT). The central bank is widely expected to hold rates at 1.25 per cent and investors will watch the statement for any reference to heightened risks relating to trade.

The Bank of Canada is already concerned about uncertainty over talks to update NAFTA and policy makers now have to contend with U.S. President Donald Trump's vow to impose tariffs on steel and aluminum.

Exports in January fell 2.1 per cent -- the largest drop since July 2017 -- from December's record high.

"There's reason to expect an even more cautious tone from the Bank of Canada," said Andrew Grantham of CIBC Economics, adding in a note to clients that the weakness in exports was a bad indicator for monthly GDP.

The drop in exports came as prices for goods climbed 1.5 per cent, in part due to the Canadian dollar rising against its U.S. counterpart in January.

Statscan said exports of passenger cars and light trucks fell due to unusual plant closures. Shipments of forestry products and building materials fell 6.6 percent as the United States resumed collecting import duties on Canadian lumber at the end of 2017.

Ross Prusakowski, a senior economist at Export Development Canada, noted the Canadian currency had weakened against the greenback in recent weeks.

"As Statscan has highlighted, there were a couple of transitory factors that affected a few key industries and that should in the near term kind of wash out of the data as well," he said by phone.

Imports fell 4.3 per cent as declines were broad based, including an 11.3 per cent drop in industrial machinery and equipment. Canada's trade surplus with the United States narrowed to C$3.13 billion.

Separately, Statscan said the labor productivity of Canadian businesses rose 0.2 per cent in the fourth quarter as an increase in business output outpaced a slowdown in hours worked.