Employment fell by 7,200 in March, mostly full-time positions in the services sector, Statistics Canada said Friday in Ottawa. Economists had forecast employers would add 6,000 jobs. Statistically, the decline is considered a flat reading. The country’s jobless rate was unchanged at 5.8 per cent.

It was only a matter of time before Canada’s jobs market cooled after a sharp rise in employment in recent months, particularly as other indicators have showed a much weaker picture.

Canada’s economy had added 290,000 jobs between August and February, the largest six-month increase since 2002. Those gains however were out of line with data that showed production stalling at the end of last year, in part because of falling oil prices.

“The party had to end at some point, since Canadian jobs data had outrun other signposts of economic growth so dramatically, making the small retreat in employment in March not much of a surprise,” Avery Shenfeld, chief economist at CIBC Capital Markets, said in a note to investors. 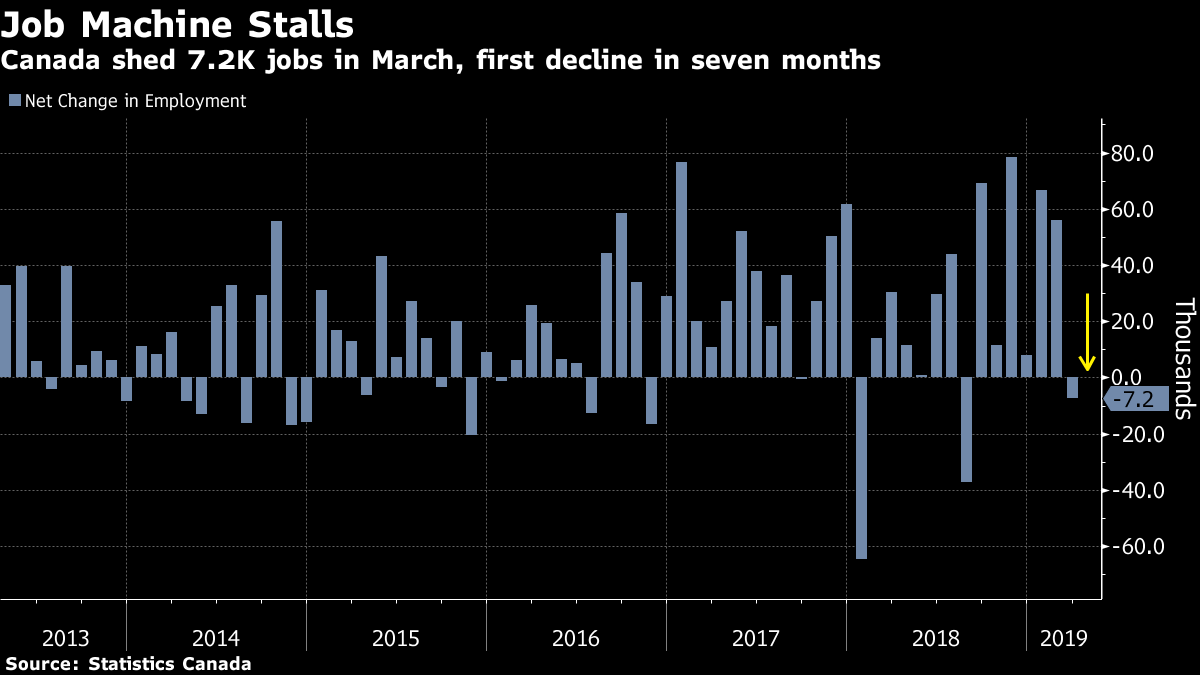 The strong performance of the jobs market up to now has been one of the reasons why the Bank of Canada has stuck to its belief the economy will rebound later this year.

The Canadian dollar extended declines after the release, down 0.2 per cent to $1.3389 per U.S. dollar in Toronto trading at 8:35 a.m. The Canadian jobs report coincided with U.S. payroll numbers that came in more than forecast in March.

Labour force numbers, which had been rising strongly along with jobs, also declined slightly in March, down by 11,300.

The employment decrease was driven by a 17,300 drop in private-sector jobs, with public sector employment up slightly last month. Full-time positions were down by 6,400, while the economy also lost 900 part-time jobs. Health-care and accommodation led the declines. Among provinces, Quebec and Ontario saw the largest declines, with combined losses of 21,700.

The labour market continues to improve in one respect: annual hourly wage gains accelerated to 2.4 per cent in March, the fastest annual gain since September, up from 2.3 per cent in February. Pay gains for permanent employees rose to 2.3 per cent, the strongest increase since August.

Total hours worked also picked up in March, increasing by 0.9 per cent annually, after a drop of 0.1 per cent the previous month.