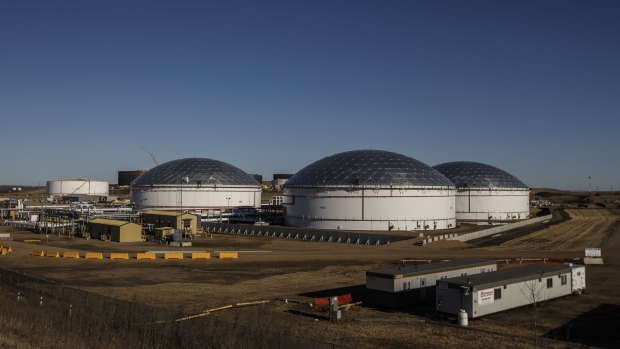 TC Energy Corp. oil storage tanks are seen in Hardisty, Alberta, Canada, on Tuesday, April 21, 2020. Since the start of the year, oil prices have plunged after the compounding impacts of the coronavirus and a breakdown in the original OPEC+ agreement. Photographer: Jason Franson/Bloomberg , Robert Tuttle

Canada’s oil heartland of Alberta has been hit with its most dangerous Covid-19 wave, with hospital intensive care beds filling up so quickly that health professionals are preparing to make decisions about who lives and who dies.

Provincial Premier Jason Kenney announced new isolation measures and introduced a vaccine passport system to allow the vaccinated to enter businesses such as bars and restaurants. The steps were introduced as hospitals were within 10 days of running out of intensive-care beds, the premier said Wednesday. Patients could be transferred out of the province, and health officials are preparing for the Critical Care Triage Protocols, used to determine who receives life-saving critical care and who doesn’t.

Four Alberta health care unions released a letter on Saturday imploring Kenney to ask the federal government to deploy the military, Red Cross and all other medical resources to assist the province’s “overwhelmed hospitals.”

With some 11,000 Covid-19 infections in past seven days, Alberta’s roughly 12% of the Canadian population accounts for more than a third of nationwide cases, government data show.

“The pressure on our ICUs is severe,” Kerry Williamson, executive director of issues management at Alberta Health Services, said in an email.

The agency has postponed non-urgent surgeries and added 137 so-called surge beds, including 37 in the past seven days, Williamson said, adding that it’s not possible to know when triage protocols will be needed. They “would only be activated when all available resources for critical care have been utilized and all other mitigations have been exhausted,” he said.

The province, which holds the world’s third-largest crude reserves, has experienced severe surges in the past. Kenney, under pressure throughout the pandemic from some members of his United Conservative Party critical of the lockdown measures, relaxed restrictions only to reimpose them when cases began to spike.

No Covid-19 surge has strained medical services as much as now. It began after the government lifted nearly all masking and social distancing requirements in July ahead of a major festival, even as vaccination rates, the second-lowest of any province after Saskatchewan, slowed.

Kenney apologized on Wednesday for his handling of the pandemic and Alberta’s Chief Medical Officer Deena Hinshaw acknowledged missteps.

The resurgence has been hard on the oil industry. New Covid measures prompted organizers of this year’s Global Energy Show, a yearly conference and exhibition in Calgary, to announce on Friday postponement of the event until 2022.

In the neighboring U.S. states of Idaho, Montana and Alaska, health officials have warned that hospitals are so strained that care could be rationed. After a slower start, Canada now surpasses the U.S. in the percentage that has received vaccines.

About 72% of Albertans 12 and older are fully vaccinated. Earlier this year, the province introduced three lotteries of C$1 million ($738,000) for people who got vaccinated. Recently, the government began paying each new vaccine recipient C$100.

A vaccine passport system being rolled out on Monday, one that’s similar to those in provinces such as British Columbia and Ontario, was resisted by Kenney, who said he only implemented it “reluctantly.”