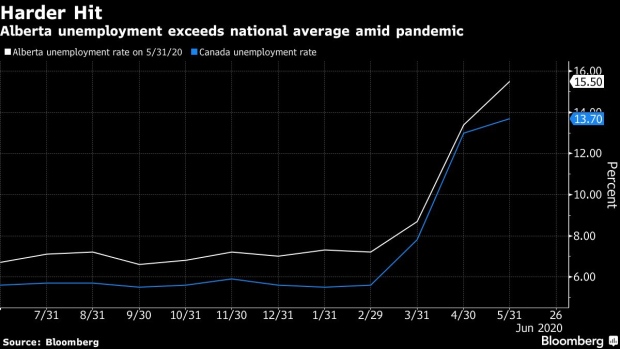 Jason Kenney, Alberta's premier, speaks during a news conference following the Canada's Premiers meeting in Toronto, Ontario, Canada, on Monday, Dec. 2, 2019. The premiers will put together a list of priorities to present to Prime Minister Justin Trudeau at the first ministers' meeting, expected in January. , Bloomberg

(Bloomberg) -- Alberta Premier Jason Kenney is using the Covid-19 pandemic to accelerate efforts to diversify his oil-dependent economy, a change of emphasis for a leader who once pledged to return the Canadian province to fiscal discipline.

Kenney’s government announced an economic-recovery blueprint on Monday that includes moving up a cut in the province’s general business tax rate by 18 months. The cut from 10% to 8% would come into effect July 1 instead of Jan. 1, 2022. The province also is planning C$10 billion ($7.3 billion) in infrastructure projects to create construction jobs, investing C$175 million to expand startups’ access to venture capital and creating a new agency to persuade companies to open offices in Alberta.

A conservative elected in 2019, Kenney had promised that barring a global economic crisis he would balance the budget, and made promoting the oil and gas industry and building new pipelines the centerpiece of his economic strategy. But the Covid-19 crisis has forced a huge pivot. Even before Monday’s plan was unveiled, Kenney’s government had already announced C$14 billion of measures to blunt the effects of the crisis.

While some components of the plan announced Monday are aimed at stimulating short-term demand, the program also represents an acceleration of Kenney’s efforts to persuade companies to invest in Alberta or relocate their head offices to the province. The goal is to foster the growth of industries like technology and finance that can cushion the periodic blows suffered by the province’s energy sector.

Kenney said many business leaders are rethinking all aspects of their operations right now, and he wants Alberta to be an attractive destination for their future investments.

“We could have just stuck in the short-term lane and focused on classic, Keynesian, countercyclical, shovels-in-the-ground kind of projects, but we wanted to take a step back and really prepare for the years to come,” Kenney said Monday in an interview. “As markets return to something like normal post-Covid, we want to be at the top of the list for shifting operations and capital.”

Alberta’s energy-dependent economy has been hit particularly hard by the global pandemic, with lockdown measures and travel restrictions hammering demand for oil products like gasoline and jet fuel. Benchmark U.S. oil prices plunged earlier this year and even briefly fell into negative territory, making all of the province’s production unprofitable.

The crash has dashed Kenney’s ambitions of returning Alberta’s budget to balance in his first term as he has spent heavily to cushion the economic blow of the crisis. In February, his government had projected the province would run a C$6.8 billion deficit in the fiscal year that ends in March 2021. Just two months later, Kenney said the deficit would be about C$20 billion.

Even before the announcements on Monday, Kenney had more than doubled planned spending on capital projects like roads and bridges to C$1.9 billion in the current budget year and loaned a local group C$100 million to clean up abandoned oil wells. Kenney’s government also faces decreased revenue from income taxes and oil and gas royalties as well as from other levies and fees that he has deferred to help companies weather the crisis.

The plan announced Monday was built on feedback from a panel that Kenney convened in March to provide advice on how to protect jobs during the crisis and come up with strategies for a long-term recovery. The panel was chaired by Jack Mintz, an economics professor who also has served on a number of Canadian corporate boards. The group included former Prime Minister Stephen Harper, Mainstreet Equity Corp. founder Bob Dhillon, Atco Ltd. Chief Executive Officer Nancy Southern and Canadian Western Bank CEO Chris Fowler.

To Kenney, Alberta’s economic challenge is still daunting, though not as dire as it first appeared at the depths of the crisis. The province has managed to weather the pandemic with less stringent shutdowns than other jurisdictions, and oil prices have rebounded to a “survival price” for Alberta’s producers, he said.

“It’s not the total Armageddon scenario we were looking at in April,” Kenney said. “I believe we’ll get through this.”