'Low chance' of Enbridge Line 5 being shut down: Analyst

If Canadians were hoping for better times with a new man in charge to their south, they were quickly disappointed in at least one respect. One of President Joe Biden’s first acts after taking office was to revoke the permit for the Keystone XL oil pipeline.

The move wasn’t a surprise, but it dismayed national and provincial leaders north of the border nonetheless. It thrusts squarely back on their shoulders a problem that has dogged the province of Alberta’s oil and gas industries for decades — how to get what they produce to international markets. Alberta dominates Canada’s oil production and if it can’t develop its own export system, those riches risk being left in the ground.

The challenges to achieving such a thing are both geographical and political. 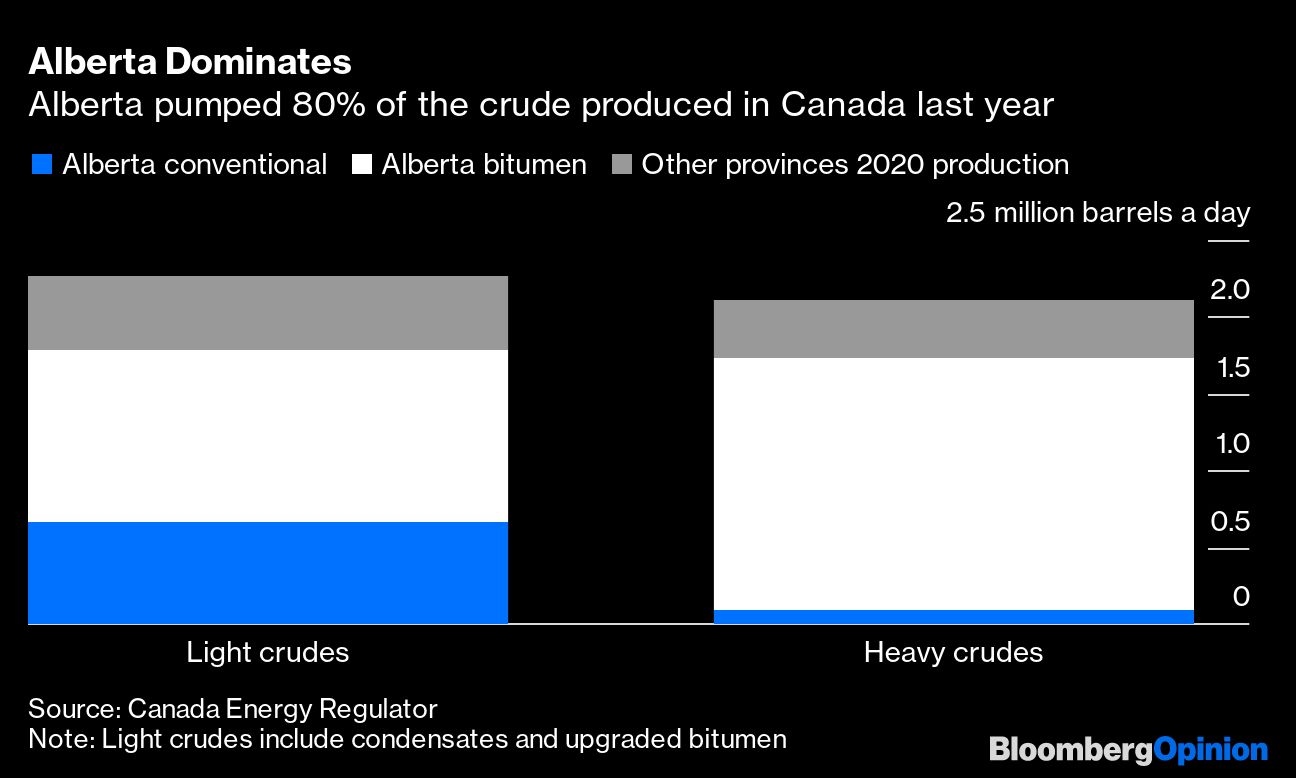 Alberta is landlocked. In that sense it’s little different to Azerbaijan or Kazakhstan in Central Asia, or Uganda in Central Africa. While the territories between the oil sands deposits and the open seas may not all be foreign countries, what with Canada’s federal structure, they might as well be. And Alberta’s neighbors don’t share its enthusiasm for hydrocarbons.

Canada’s west coast would be the most obvious jumping off point for oil and liquefied natural gas exports to Asian markets. But stiff opposition in British Columbia has prevented Alberta’s oil and gas producers from taking full advantage of that opportunity. And, sadly, Alberta’s own politicians have refused to give other provinces much incentive to help out. 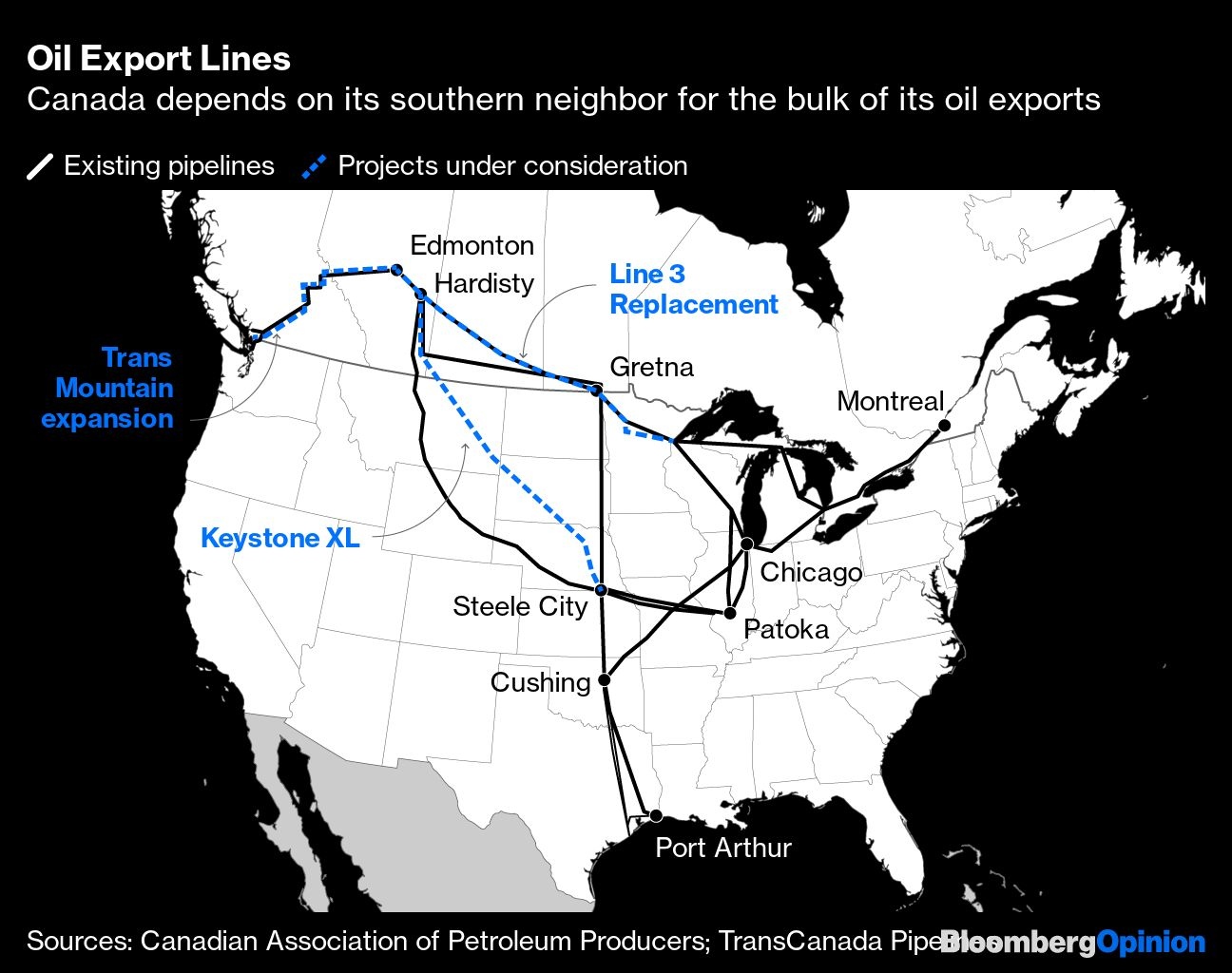 Back in 2012 I shared a platform with Ted Morton, then Alberta’s energy minister, at a conference organized by the Canadian Energy Research Institute. I was bemused to hear him say that because pipelines to the Pacific Coast were of national importance, it was the federal government in Ottawa’s responsibility to get them built, not the provincial authorities in Edmonton. Moreover, he said Alberta wouldn’t share its oil and gas royalties with British Columbia to facilitate transit accords. Every cent would stay in Alberta.

That seemed to me then, and still does now, a very short-sighted attitude. If Alberta’s economy was to rely on the extraction and export of hydrocarbons, then the Alberta government ought to have been doing all it could to facilitate getting the product to market. Yet giving British Columbia a financial incentive to host export pipelines was one tool Alberta never seemed willing to take out of the box.

Several years earlier, Paul Stevens of the University of Dundee in Scotland caught my attention at another conference when he presented a list of criteria for what makes a “good” transit country — or, in Alberta’s case, a good transit province. They relate to a territory’s ability to attract investment and the degree to which it can hold a pipeline and its users to ransom once it’s in operation. I’ve summarized them in the table below. 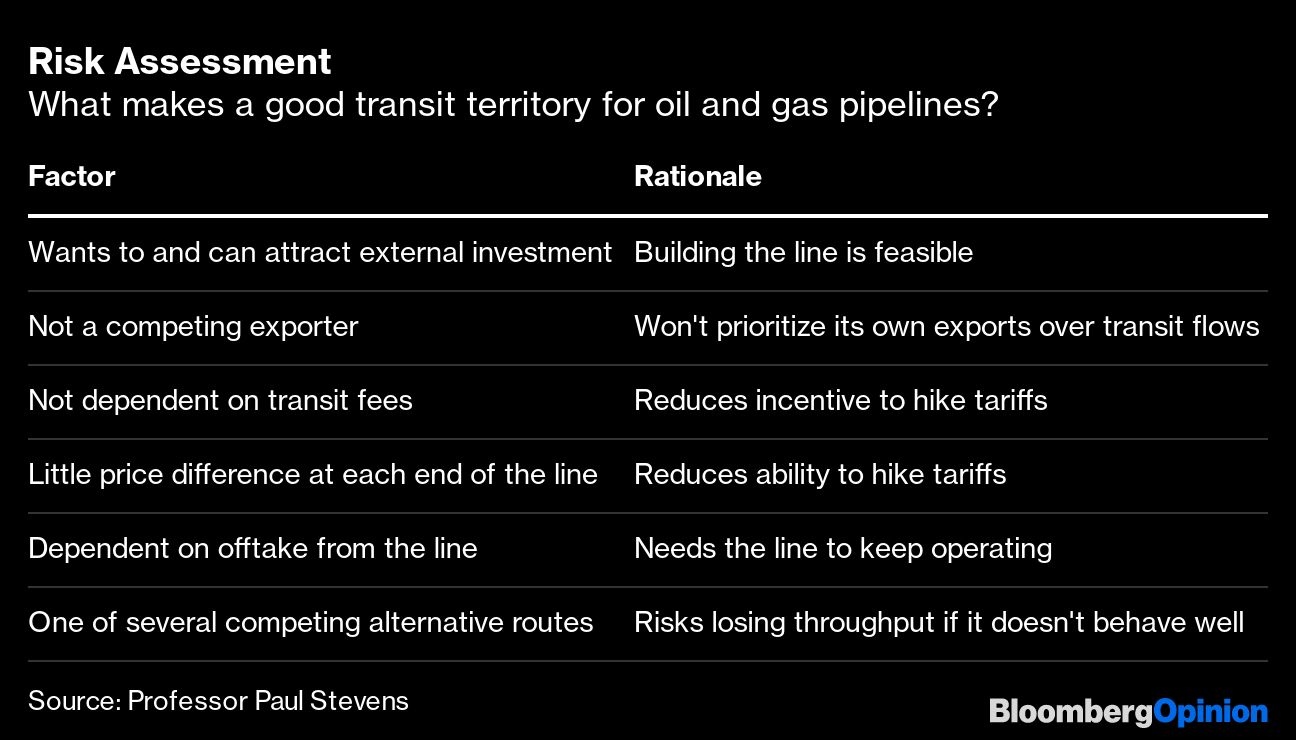 British Columbia satisfies many of those criteria. But the big problem for would-be Albertan exporters is that many of their western neighbor’s residents simply don’t want their province, home to mountains, forests and a largely unspoiled coastline, to play host to oil and gas pipelines from which they will derive little benefit. Especially not with the ecological risks involved.

Alternative export proposals to Canada’s east coast have faced similar obstacles — as well as much greater distances to cross.

That meant Alberta’s last real hope was to expand pipelines to the south to carry Canadian crude to U.S. refineries and export terminals on the Gulf coast. But that route ticks even fewer boxes in the “good transit country” list than Alberta. Now that door, too, has closed.

The environmental resistance looks very well insurmountable — even a return to a pro-oil U.S. administration in four years’ time would come too late. It doesn’t matter that Alberta’s producers have reduced the carbon footprint of their oil and gas extraction. That’s not where the real carbon costs of hydrocarbons lie. They are concentrated in the burning of the end products, and facilitating more production doesn’t fit with the post-hydrocarbon world embraced not only by Biden but increasingly governments and investors everywhere.

Alberta has only itself to blame for the pickle it’s in. If its leaders had been more willing to share their wealth a decade ago, when people were still concerned about oil running out, they might have got their pipelines built. Now, they are going to have to put themselves on the path to their post-oil future much sooner than they had hoped.