The Public Sector Pension Investment Board, one of Canada’s largest pension funds, has cut back on equities and fixed income in its capital markets business in favor of private credit, emerging markets credit and infrastructure after the unit reaped gains of 27 per cent last year.

“We’ve shifted money to these assets that can provide the same risk factors, but with higher returns,” president and chief executive officer Neil Cunningham said in an interview Wednesday. 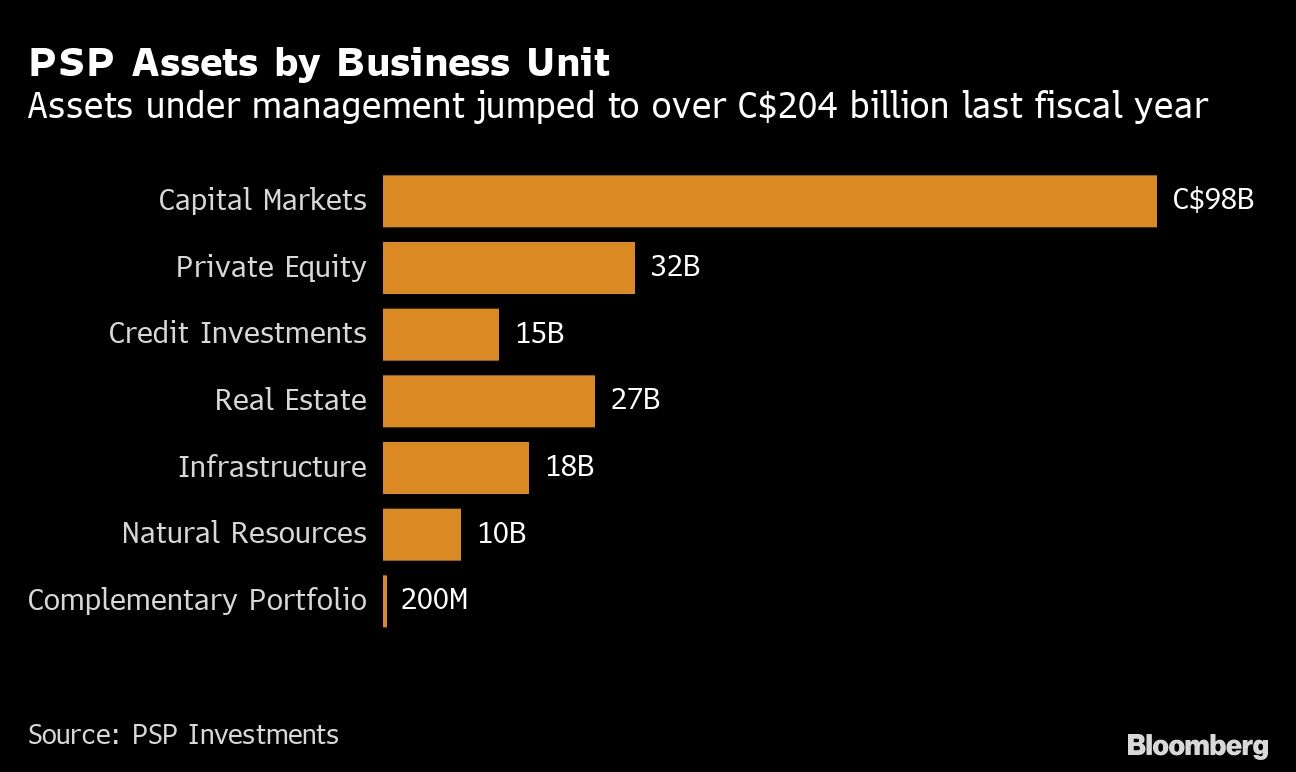 In particular, PSP Investments is betting on infrastructure as the global economy recovers from a pandemic-induced slump.

“We’ve increased allocation to high-correlated infrastructure to capture that real return aspect of infrastructure on assets that are long dated and going to involve a lot of credit and operational risk, as we’ve been looking for alternatives to the traditional bond investments,” he said.

Ottawa-based PSP returned 18.4 per cent in the year that ended in March, compared with a loss of 0.6 per cent a year earlier. Total assets under management increased by more than 20 per cent, to $204.5 billion (US$168 billion). It was the best return in a decade for the fund that oversees the retirement savings of the Canadian Forces, the Royal Canadian Mounted Police and public servants.

PSP’s capital markets business, which is comprised of publicly traded equities and fixed income, ended the fiscal year with $97.5 billion of net assets under management, up more than 20 per cent from last year, as global equity markets recovered from their March 2020 lows. Investments in hedge funds spearhead the gains, which benefited from the surge in mergers, public offering activities and event-driven situations, the fund said.

Its overall 10-year annualized return of 8.9 per cent beat its own benchmark by 1.1 percentage points per year, the fund said.

One of PSP’s first actions at the beginning of the pandemic was to impose a temporary hiring and salary freeze, resulting in lower growth in compensation costs for the previous fiscal year. At the end of the fiscal year, the operating cost ratio was 28 basis points, a 3.8 bps decrease compared with the end of fiscal 2020.

“We did not know how deep the crisis was going to be, and since we are on a growth trajectory we try to, as best we can, time the growth of our activities, which implies the growth of our employee base, to coincide with the growth” of assets under management, Cunningham said.

By September the fund had lifted the freeze and has since resumed hiring. It expects to ramp up the growth of its Hong Kong office, which it opened two years ago to be the pension’s Asia hub.

“Our hiring process there has been slower there than we originally anticipated, because of the the difficulties in Hong Kong, starting from protests and COVID of course,” Cunningham said.

Cunningham said he expects a permanent shift to hybrid work at PSP, with employees still commuting to an office but less frequently.

“A lot of our employees are used to working in hotel rooms and airport lounges,” he said. “Now it’s obvious that with the full company working from home, we’ve seen the basic principle of what can be done and what can’t be done easily.