GDP came to a standstill in October, StatsCan estimates

The Canadian economy roared back to life in the third quarter, recording its biggest ever expansion, but it was a smaller than expected increase and early data show the momentum is quickly fading.

Gross domestic product rose by an annualized 40.5 per cent in the July to September period, Statistics Canada reported Tuesday in Ottawa, erasing much of the record 38.1 per cent drop in the second quarter. Economists were predicting a 48 per cent increase. The rebound brings total output to 95 per cent of pre-pandemic levels.

Early success controlling the spread of the virus allowed the economy to rebound quickly, as massive government aid propelled consumer spending and low interest rates fueled a surge in the housing market. However, the data suggest further gains will be harder to achieve from here, particularly with a surge in COVID-19 cases and fresh lockdowns that could bring the economy to a halt in the final months of the year. 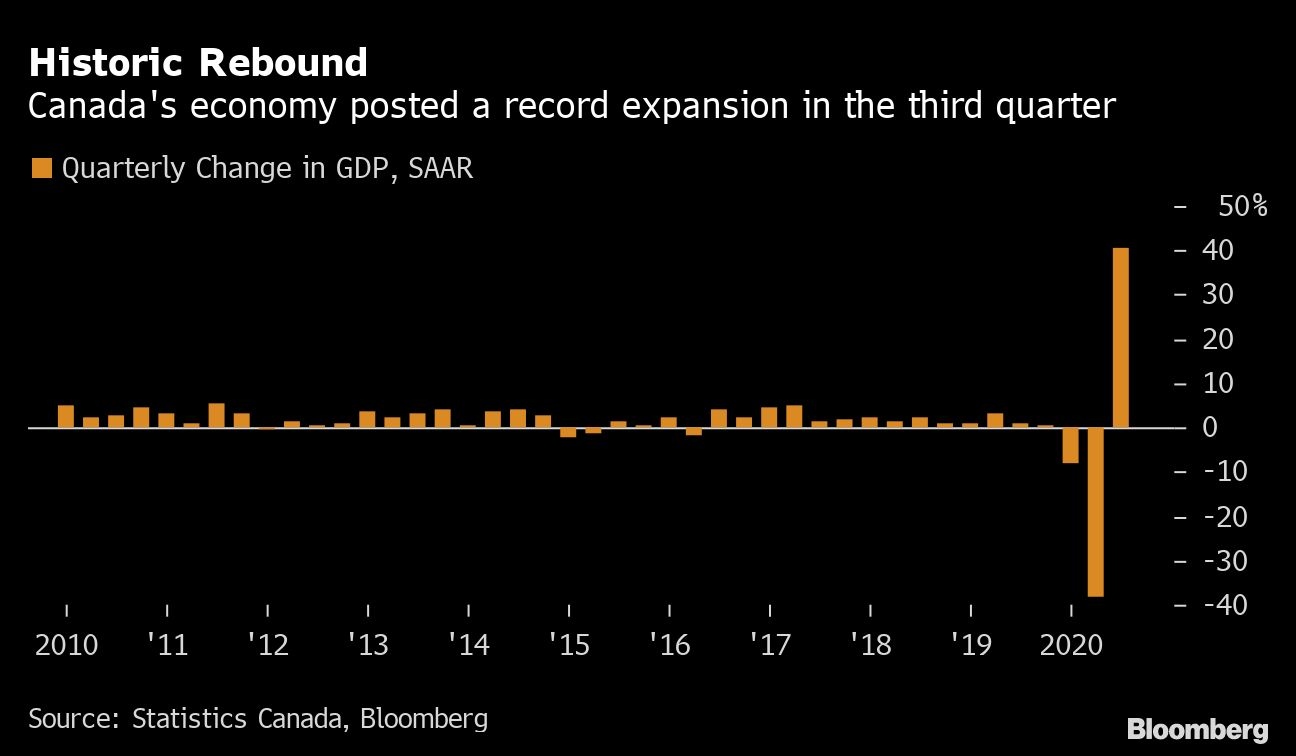 “The latest restrictions are set to cause GDP to stagnate at the end of 2020 and activity will remain depressed until an effective vaccine is rolled out,” Stephen Brown, senior Canada economist at Capital Economics, said in a report to investors.

Statscan released a preliminary estimate for October of 0.2 per cent growth, which would be the lowest monthly gain since the sharp decline in April. Some economists believe the nation’s economy may even contract in November and December.

Even before the new lockdowns, officials were anticipating a slow return to full recovery following an initial strong rebound. The Bank of Canada’s projections don’t see a return to pre-pandemic activity before 2022. The slow recovery and worries about a second wave prompted Prime Minister Justin Trudeau’s government to roll out a fresh dose of stimulus in a mini-budget Monday.

“Canada’s softer-than-expected third-quarter rebound is not nearly as weak as it looks. The undershoot relative to consensus expectations is largely due to inventory and trade contributions, with domestic demand holding up well. Strength in imports and consumer spending is testament to resolute fiscal support throughout the pandemic.”

Government benefits have played a critical role in the recovery so far, making households flush with cash over the past six months. Wages also have begun to rebound as employment levels return to more normal levels.

As a result, Canadians went on a shopping spree over the summer, with consumption rising by an annualized 63 per cent in the third-quarter.

The data show much of that spending went toward buying imported goods, dulling the effect on growth. Imports surged by an annualized 114 per cent in the third quarter, outpacing a 72 per cent gain in exports.

Savings also remain elevated. While the household savings rate declined to 14.6 per cent in the third quarter, down from 27.5 per cent, it’s still historically elevated. That will provide a cushion for future growth, but also highlights that consumers are wary.

Canada’s housing market, which has been on a tear, was a major contributor to growth with residential investment surging 187 per cent on the back of strong housing starts and renovations. But the picture for business was less rosy.

Businesses also unexpectedly scaled back inventories, rather than meet demand with higher production.