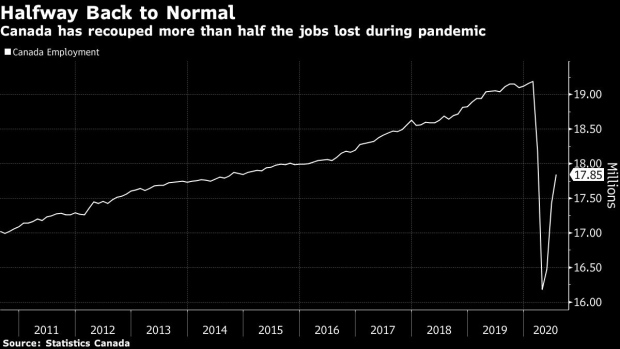 Signage for the Toronto Stock Exchange (TSX) is seen in the financial district of Toronto, Ontario, Canada, on Monday, March 16, 2020. Canadian stocks plunged more than 9% after emergency measures from central banks failed to soothe fears the economy will suffer a heavy blow from the coronavirus. , Bloomberg

(Bloomberg) -- After an epic rally from its pandemic low, Canada’s equity market may be losing some steam.

The S&P/TSX Composite Index has made a remarkable comeback since March. It still needs to rise another 519 points, or 3.1%, to break even for the year. The index has been carried by big gains in gold and technology: Only 41% of its members (91 of 221) are in the green for 2020, according to data compiled by Bloomberg.

As the coronavirus outbreak ravages economies and businesses around the globe, Canadian companies have shown some resilience -- with a majority of firms beating analyst estimates in the second quarter. A jump in commodity prices and Shopify Inc.’s big leap have pushed the nation’s equity benchmark to its longest monthly rally since September.

In the 96 trading days since the March low, the TSX has closed in the green on 61 days, or 64% of the time. That’s higher than the 54% seen annually going back two decades, according to data compiled by Bloomberg.

But a resurgence in virus cases, stalled U.S. fiscal stimulus talks ahead and geopolitical tensions -- all in the midst of America’s tumultuous presidential election campaign -- have renewed volatility.

The abrupt plunge in stocks earlier this year was met with an equally rapid bounce thanks to fiscal and monetary stimulus, “and now that shock effect seems to be wearing off and we’re dealing with the ‘what’s next?’,” said Greg Taylor, chief investment officer at Purpose Investments Inc.

Equity markets are painting a more optimistic picture than bonds. Stocks bulls are focused on the economic recovery, while fixed-income markets suggest the growth profile will be a slow and long grind, according to Kevin McCreadie, chief executive officer of AGF Management Ltd.

“You have to barbell a little bit of both in your portfolio right now to position,” he said on BNN Bloomberg.

The tug-of-war for investor sentiment can be seen in Canada’s economic recovery. While the country has a handle on the virus outbreak and has seen a strong recovery in employment numbers, a larger part of the economy is still dependent on its major trading partners and many of them are still in crisis mode against Covid-19, said Ed Moya, a senior market analyst at Oanda Corp.

What could provide a solid boost to Canada’s market is bank earnings results due later this month. The nation’s Big Six banks -- which make up almost a fifth of the S&P/TSX Composite -- are slated to report in about two weeks. Strong profit growth or an improving outlook for loan losses, indicating projections a solid economic recovery, could help with giving the equity market a lift.

Investment firms that have reported so far have seen strong growth in assets under management and trading activity, which could be also a positive indication for earnings at Canada’s biggest banks.

“People are starting to realize that there’s potential the Canadian banks could have a positive surprise, and that’s really not priced in stocks at all given how much they’ve underperformed other sectors this year,” Purpose’s Taylor said.

Canada’s economy recorded a third straight month of strong employment gains that have recouped more than half of losses from Covid-19. Employment rose by 418,500 in July, bringing to 1.7 million the number of jobs reclaimed over the past three months.

Visible minorities were among those hardest hit by Canada’s recession, with some groups reporting jobless rate increases about double those of the least affected.

Canadian households are showing a newfound economic optimism, a good sign for the nation’s nascent recovery. After stalling at the end of June, sentiment around personal finances, job security, economic growth and real estate are all beginning to march higher again, telephone polling shows.

Home sale numbers in Toronto and Vancouver also picked up in July with a 29.5% gain year-over-year in Canada’s most-populous city and 22.3% in the latter.

Canada will hit the U.S. with retaliatory tariffs after President Donald Trump announced plans to impose duties on Canadian aluminum. Deputy Prime Minister Chrystia Freeland released a list of more than 60 U.S. aluminum-containing products that could face higher tariffs, but vowed not to escalate the situation beyond what she said was a dollar-for-dollar equivalent duties, totaling C$3.6 billion ($2.7 billion) in goods.

Ontario Premier Doug Ford also joined the spat, urging consumers to shift purchases away from U.S. goods to fight against the tariffs.