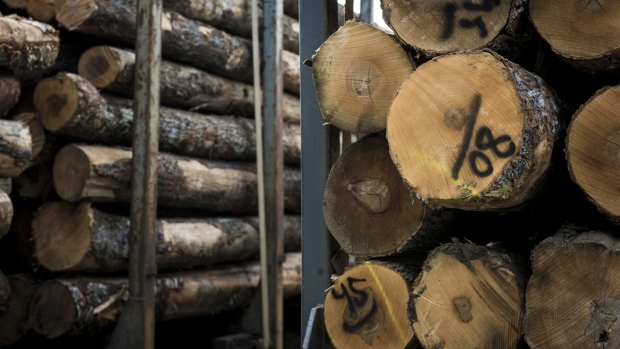 Logs sit stacked at JML Trucking and Excavating lot across from the office of Wagner Forest Management Ltd., a company hired to manage Yale's land, in Errol, New Hampshire, U.S., on Aug. 10, 2017. For at least two decades, Yale has led a land rush by the richest colleges. Funds snapped up forests as a way to hedge against inflation and the risks of stocks and bonds, and to take advantage of endowments' unusual ability to make investments that might not be easy to sell quickly. , Bloomberg

Mills in the heart of Canada's timber industry have fallen quieter this winter as wildfires and infestations made worse by climate change have made vast tracts of once valuable forest into barren stands of dead trees.

After seeing record high softwood lumber prices earlier this year, Canada's forestry industry is facing an uncertain future due to falling demand from a cooling U.S. housing market, increasingly frequent and intense forest fires and the continuing damage from pests such as the mountain pine beetle.

"We're kind of at that point in the cycle where, unfortunately, permanent reductions have to happen," said Ed Sustar, a forestry products analyst at Moody's Investor Service.

"It's going to be a relatively sizable part of the B.C. lumber industry, but it's not a surprise."

British Columbia, home to close to a third of Canada's wood manufacturing jobs, is showing the most visible effects of reduced supplies as numerous companies have cut back mill production in recent months.

West Fraser Timber Co. Ltd. (WFT.TO) cited timber supply shortages brought on by the mountain pine beetle for permanently cutting 300 million board feet of production, at a cost of upwards of 75 jobs in the new year, at its Fraser Lake and Quesnel sawmills. That was on top of production cuts in the last stretch of the year at a string of interior mills from log supply constraints.

Interfor Corp. (IFP.TO) cut about 20 per cent of production for this last quarter, citing escalating log costs, while Canfor Corp. (CFP.TO) curtailed B.C. production by 10 per cent due to log supply constraints. Conifex Timber Inc. cut production by 15 per cent at its Fort St. James, and then by another 10 per cent for the next half year.

The supply issue has, however, been looming for some time, as the large swaths of B.C. forest killed by a pine beetle epidemic decay into worthless dead stands. The tinderbox created by the outbreak, combined with warmer, drier weather, have in turn helped create back-to-back record forest fire seasons in the province.

In 2017 wildfires destroyed about 1.2 million hectares of forest. This fiscal year it's estimated at 1.4 million, compared with an average of 151,000 hectares for the 10 prior years.

The decrease in the amount of healthy B.C. forest has pushed companies to expand further into the U.S. or abroad, said Sustar.

"All these companies where B.C. was their base, they're all expanding and diversifying outside of B.C., and B.C.'s become a smaller portion."

The provincially-set amount of timber that industry can harvest has already dropped by about 25 per cent in the past decade to around 52 million cubic metres, noted Sustar. B.C. government projections on the impacts of the 2017 fires alone are expected to reduce the mid-term supply by more than half in Williams Lake and 100 Mile House and by about 44 per cent in Quesnel.

"We do and we will have a mid-term challenge with respect to availability," said Susan Yurkovich, president of the B.C. Council of Forest Industries.

"Fibre availability is a key issue for the industry, it's our main product input, so of course it's very significant."

The wild card in all of this continues to be the effects of climate change, and how much it will change the supply picture.

"It's already really created huge problems in terms of timber supply," said Sally Aitken, a professor at the University of British Columbia.

"Climate change will touch pretty much everything we do in forestry, and everything that lives in forests."

She's studying how to create forests that will be more resilient to climate change, by selecting genetic varieties of trees that could better withstand the changes coming.

The impact of climate change on the health of forests is hard to predict, however, as changing weather patterns lead to both wetter and drier conditions, while a variety of threats including insects like the pine beetle, fir beetle, spruce budworm as well as diseases and fungi get worse.

Barry Cooke, a forestry researcher at Natural Resources Canada, describes the trend as climate weirding, since so many factors are at play.

"You have climate changes percolating through this cascade of physical and biotic consequences," said Cooke.

His research has focused in part on Canada's far north forests, where melting permafrost has let to what he describes as drunken trees falling over in the waterlogged soil.

But he notes that government research is showing climate change impacts are coming to all areas of the Canadian woods, including the fires of the west coming east. He also sees a deterioration in the quality of the forests, as growth-rings thin and faste growing but lower quality plants and trees mask the decline of core species.

"Yeah there are a lot of trees here, but they're not as healthy as they used to be...the forest is in a process of transforming," said Cooke.

"We are seeing growth declines in Eastern Canada, and this wasn't predicted to happen this soon. We thought maybe in 20, 30 years we might see this, but it's happening already."

The changing trends means lots of uncertainty for Canada's forests going forward, said Cooke. Trees can endure wide fluctuations of weather, he noted, but their health can change suddenly once critical thresholds like moisture balance are tipped.

"Everything looks fine until it's not."