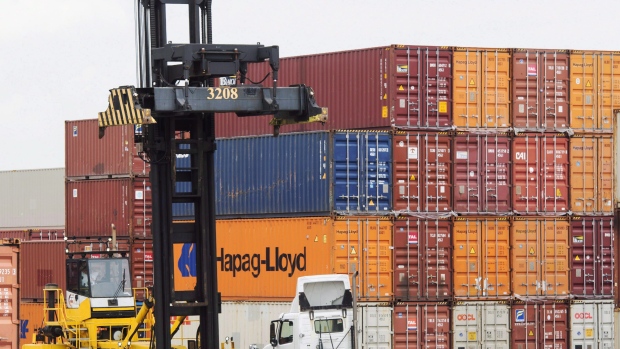 Containers are unloaded at the Port of Montreal Thursday, July 20, 2017 in Montreal. The Port of Montreal is taking on 50 new hires by 2019, continuing its hiring spree in a move prompted by the proposed United States-Mexico-Canada trade deal. , THE CANADIAN PRESS/Ryan Remiorz

Canada’s trade sector posted a much-needed rebound, with shipments up across the board in what was a positive end to a tough first quarter for the nation’s exporters.

Exports jumped 3.2 per cent in March, largely due to increases in volumes rather than prices, Statistics Canada said Thursday from Ottawa. The export jump offset a 2.5 per cent rise in imports, helping to narrow the nation’s trade deficit to $3.2 billion , from an upwardly revised $3.4 billion in February.

Yet even with the improved picture for March, the data show a bleak first three months for trade, with the country recording its biggest quarterly trade deficit in almost three years. First-quarter exports were up 0.5 per cent in nominal terms, but down 2.4 per cent in volume terms.

The March data are a reprieve for the battered trade sector, with export gains recorded in nine of 11 categories tracked by Statistics Canada. While higher crude oil production helped, the non-energy sector showed strong gains as well with exports up 2.1 per cent in nominal terms and 1.5 per cent in volumes. The improved export picture in March, however, masks downward revisions for exports in February and January that make the performance in those two months even worse than initially thought. Nearly $900 million in exports were wiped off the books, with deficits revised up accordingly. The data suggest the trade sector will be a major drag on growth in the first quarter, as the drop in export volumes is compounded by a 2.4 per cent gain in real imports. That’s one of the main reasons the Bank of Canada is estimating practically no economic growth at the start of the year.