Canada’s merchandise trade surplus came in smaller-than-expected in August as both exports and imports fell, in another sign of weakness for the nation’s economy.

The surplus fell to $1.52 billion, from a downwardly revised $2.37 billion in July, Statistics Canada reported Wednesday from Ottawa. It was the smallest monthly trade surplus this year. Economists were anticipating exports to exceed imports by $3.5 billion in August.

After hitting records in June on surging oil prices, exports have now dropped sharply for two second consecutive months as energy prices fell. Total export shipments were down 2.9 per cent in August after a 3.7 per cent decline in July. It represents the biggest two-month drop in the value of shipments since the depths of the pandemic.

The trade numbers add to a recent string of data -- including a stalled labor market -- that suggest the nation’s economy will struggle to grow by much in the second half of this year, amid slowing global growth and rising interest rates. 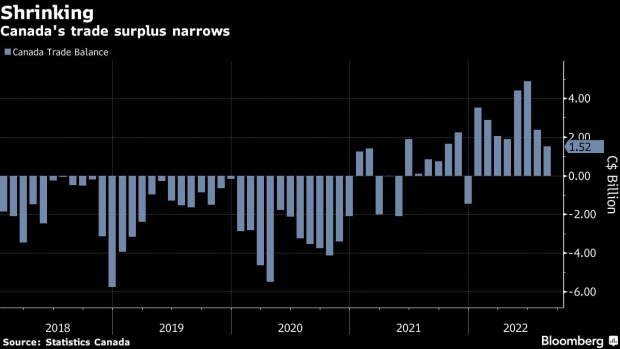 Canada had benefited from surging oil prices earlier this year, which helped the nation swing into recurring surpluses for the first time since 2014.

The drop in exports extended beyond energy, however, with seven of 11 subsectors posting declines. Excluding energy products, total exports were down 1.7 per cent. In volume terms, exports fell 1.3 per cent.

Imports, too, recorded a second consecutive monthly decline, reflecting weak activity in the North American car industry. The value of goods purchased from abroad fell 1.7% in August, following a 0.7 per cent drop in July. In volume terms, imports were down 0.7 per cent.