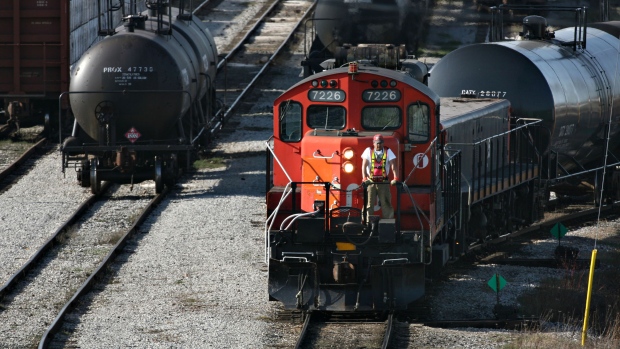 A railway worker stands in the front of a CN Rail freight train as it moves through their Macmillan yard, north of Toronto, Ontario, April 19, 2006 , Bloomberg News/Norm Betts

Canada's two largest railways moved record quantities of grain in the second quarter after benefiting from another strong month in June.

Canadian National Railway said it is on pace for record shipments of grain this crop year after record movements of Canadian grain last month and the quarter as a whole contributed to its best performance in the first half-year.

The Montreal-based railway said it has moved 26.9 million tonnes so far this crop year that ends July 31, up from 26.5 million tonnes at the same point last year.

The Calgary-based railway said it was the best three-month stretch since the 7.9 million tonnes moved in the fourth quarter and best June in six years when 2.4 million tonnes was moved.

"The collaborative relationships CP has built with its customers, combined with responsive rail service, have contributed to another quarter of record-breaking grain movements," said Joan Hardy, CP Rail's vice-president sales and marketing grain and fertilizers.

The country's railways have ramped up shipments of Western grain by using larger hopper cars and trains while customers have been investing in elevator networks to accommodate 8,500-foot trains.

CP Rail said its longer trains can carry in excess of 40 per cent more grain than the 7,000-foot train model when combined with the extra capacity of new hopper cars. More than 2,700 of these high-capacity cars are now in service. They can carry 15 per cent more volume and 10 per cent more weight compared with the older models.