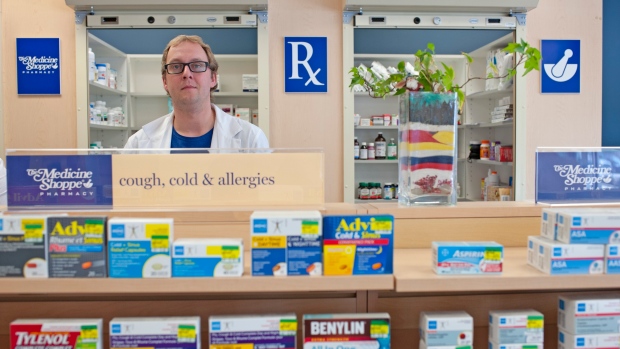 Matthew Manz, left, stands behind the counter at the pharmacy he manages in Regina, Sask., May 31, 2019. The Canadian Press/Mark Taylor

OTTAWA — An expert panel is calling for the federal government to work with the provinces and territories to create a single-payer national pharmacare plan to cover every Canadian.

Eric Hoskins, Ontario's former health minister, released the findings in Ottawa, giving advice on how to address the country's patchwork of private and public prescription-drug plans.

Canada has a variety of drug plans administered by provinces, mainly for children, seniors and people on social assistance. Other plans managed by the federal government cover other groups, such as Indigenous people and members of the military, while private insurance fills the gaps for some.

Hoskins' council is recommending a new drug agency that would be responsible for developing a national list of prescription drugs, known as a formulary, beginning with common or so-called essential medicines by Jan. 1, 2022.

It also recommends that the initial formulary expand to a "fully comprehensive formulary" no later than Jan. 1, 2027.

Health Minister Ginette Petitpas Taylor responded with a statement saying the government "will carefully review the council's final report and its recommendations" and to work with provinces, territories, stakeholders and partners "as we consider next steps."

"Our council has heard the stories of thousands of Canadians and listened to a wide range of perspectives," Hoskins said in the report, entitled "A Prescription for Canada: Achieving Pharmacare for All."

"The time for universal, single-payer, public pharmacare has come ... Let's complete the unfinished business of universal health care. That can be our promise, and our legacy, to each other and to all future generations."

The council says universal, single-payer public pharmacare will provide access to prescription medications for all Canadians, including an estimated one in five Canadians who are either uninsured or underinsured.

The plan, once implemented, will result in an estimated $5 billion in savings, the council said, adding that savings for Canadians will be on average $350 per year.

In its last budget, the Liberal government pledged to create a new agency to buy drugs in bulk and cut Canadian medication costs as the first step toward a national drug plan. Petitpas Taylor said the government will carry on with that but committed to nothing further.