Canada’s labor market weakened for a second month amid widespread restrictions to control a third wave of COVID-19.

The economy lost 68,000 jobs in May, Statistics Canada reported Friday in Ottawa. That adds to the 207,100 positions lost in April. The unemployment rate rose to 8.2 per cent, from 8.1 per cent. Economists in a Bloomberg survey had predicted a loss of 25,000 jobs, with a jobless rate of 8.2 per cent.

Despite the back-to-back monthly setbacks, analysts expect a quick rebound as early as this month as containment measures are lifted. Ontario and Quebec -- the two biggest provinces -- have been gradually reopening in recent weeks, with the pace of vaccinations picking up speed and cases falling. 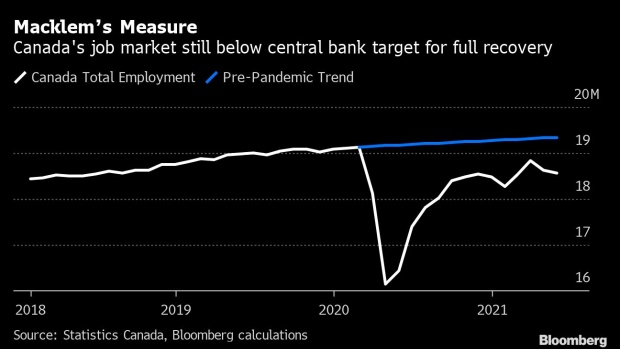 The country went through two major waves of COVID-19 lockdowns over the winter months that have hampered recovery efforts, starting with restrictions in December. The 266,000 jobs lost in that second wave were almost fully recovered in just one month, when restrictions were lifted in February. Economists anticipate the same recovery this time.

“We’ve now seen slightly more jobs lost in this third wave -- the April and May losses -- relative to the job losses in the second wave,” Eric Lascelles, chief economist of RBC Global Asset Management, said on BNN Bloomberg Television. “At a minimum it’s comparable, and that makes sense. We’ve seen quite a significant lockdown this go-round.”

The current wave coincided with new restrictions that began in April. Many provinces kept COVID restrictions in place for most of May as they tried to control a third wave of the virus.

Economists are predicting a healthy rebound in the second half of the year as businesses reopen and consumers get comfortable again attending in-person activities, though some concerns are creeping in about disruptions that could undermine any recovery.

The U.S. labor market, where employers are struggling with shortages, is one reason for worry, as many workers south of the border choose to stay on the sidelines because of childcare obligations, enhanced jobless benefits and skills mismatches. At 64.6 per cent, Canada’s labor force participation fell for a second month to its lowest since August.

“It’s simply that the talent is there, the people are there -- and they’re not working,” Lino Saputo Jr., chief executive of Montreal-based cheese producer Saputo Inc., said in an interview with BNN Bloomberg on Friday. “They just, for whatever reason, don’t want to come to work.”

The executive said generous benefits to households may explain some of that reluctance, and called on Prime Minister Justin Trudeau’s government to pare back supports. “We’ve got to ease up on those measures so that people ultimately have an incentive to come back to work,” Saputo said.

Canada’s jobs losses were largely part-time workers, who saw employment decline by 54,200 during the month. Full-time employment was down by 13,800. Hours worked were little changed in May.

“While we continue to look for a solid rebound in employment through the summer and into the fall, the slow-walk jobs recovery in the U.S. sounds a cautionary note,” Doug Porter, chief economist at Bank of Montreal, said in a report to investors.

The potential for a sharp rebound and a faster-than-expected full recovery has already prompted the Bank of Canada to start paring back its stimulus and warning of higher interest rates. A slower-than-expected jobs rebound will almost certainly upset that outlook.

Governor Tiff Macklem has indicated he believes a full-recovery should bring employment to about 200,000 above pre-pandemic levels, when unemployment was below 6 per cent. With April and May’s losses, Canada’s economy remains about 770,000 jobs shy of the central bank’s measure.