Canada’s economy posted record job gains in April that, along with a pick-up in wages, is the strongest signal yet the country is coming out of a six-month stint of weakness.

Employment rose by 106,500 in April, Statistics Canada said Friday in Ottawa, the biggest one-month increase in data going back to 1976. That trounced the median economist forecast for a gain of 12,000 positions. The country’s jobless rate dropped to 5.7 per cent, and is hovering near four-decade lows.

“As much as I try to poke holes in these numbers, I can’t,” Derek Holt, an economist at Scotiabank, said by phone from Toronto. “You’ve got sector breadth, you’ve got regional breadth, the four biggest provinces are up.”

The report reaffirms just how much the labor market has been the main driver of Canada’s expansion and ratifies the central bank’s view the recent slowdown would be temporary. Friday’s numbers add to other indicators that show the country is on the path back to growth after stalling for much of the past six months.

The Canadian dollar jumped 0.7 per cent to C$1.3386 per U.S. dollar at 9:54 a.m. in Toronto. Two-year Canadian government bond yields climbed 4 basis points to 1.62 per cent, as investors pared bets the Bank of Canada would need to cut rates to fuel the expansion.

“It seems like there’s a little more strength left in the Canadian economy,” Brian DePratto, a senior economist at Toronto Dominion Bank, said in a telephone interview.

For months, the labor market had been the lone bright spot in a struggling economy, and was the only thing giving policy makers much comfort.

Analysts had warned as recently as last month that Canada ran the risk of falling into a recession amid a perfect storm of negative factors -- falling oil prices, volatile financial markets, higher interest rates, cooling housing markets and global trade tensions. But many of these elements have begun to reverse.

Exporters showed across-the-board resiliency in March, after shipments tumbled in February. Toronto’s housing market, the country’s largest, is stabilizing after a recent slump. There are also signs consumers continue to spend and borrow, aided in large part by the strong labor market, even amid worries about the outlook.

The job gains in April were broad-based -- across industries, regions and demographics --with few weaknesses. Most of the gains were full-time, up 73,000, and in the private sector. Both goods-producing and services sectors recorded gains.

Even wages -- which have been sluggish -- are showing signs of life. Annual hourly wage gains accelerated to 2.5 per cent in April, the fastest annual gain since September, up from 2.4 per cent in March. Pay gains for permanent employees rose to 2.6 per cent, the strongest increase since August.

Total hours worked also picked up, increasing by 1.3 per cent annually in April, from 0.9 per cent in March.

The jobs increases have largely reflected higher labor force numbers as the economy pulls in new workers -- youth and immigrants in particular -- rather than falling unemployment. The number of people in the labor force jumped by 108,100 in April, also a one-month record, on a surge in youth participation.

“We’re drawing in people, and that tells you how tight the labor market is,’’ Tony Stillo, director of Canada economics at Oxford Economics, said by phone.

Regionally, there were gains in most provinces including Alberta, which saw 21,400 jobs created. Employment in Ontario jumped by 47,000 in April, with job increases in Canada’s largest province at 205,000 over the past year. Quebec employment rose by 38,000, dropping its unemployment rate to 4.9 per cent, the lowest in data going back to 1976.

Strong increases in youth employment also lowered the unemployment rate for that demographic to record lows. 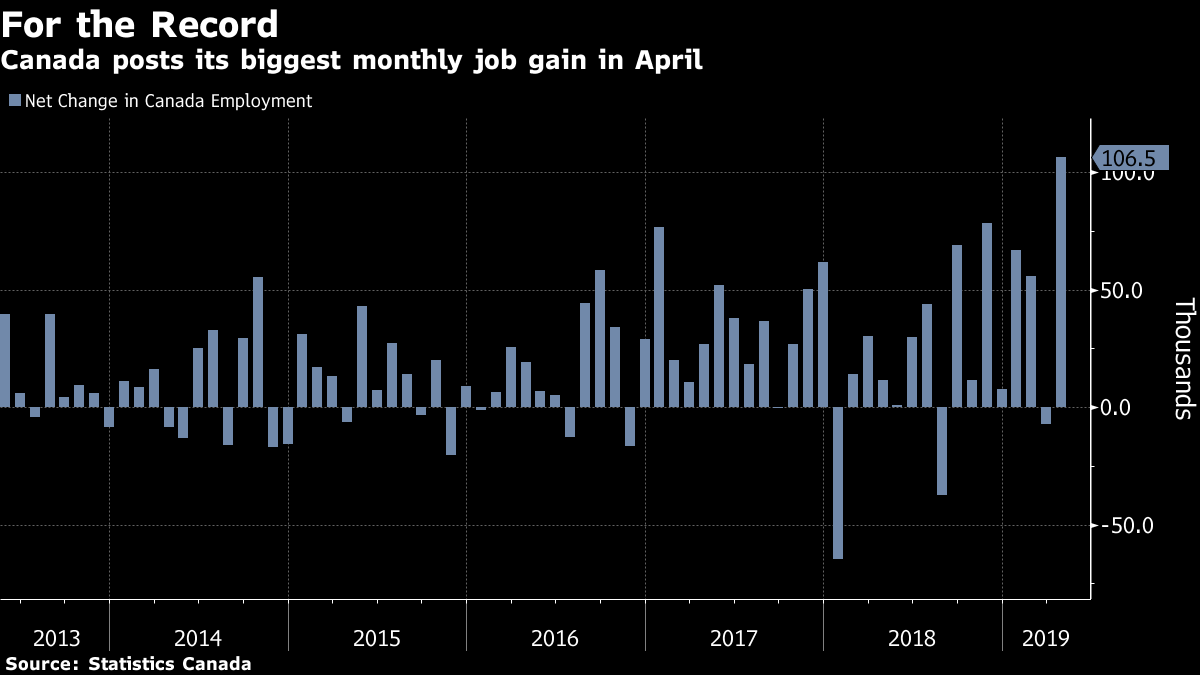