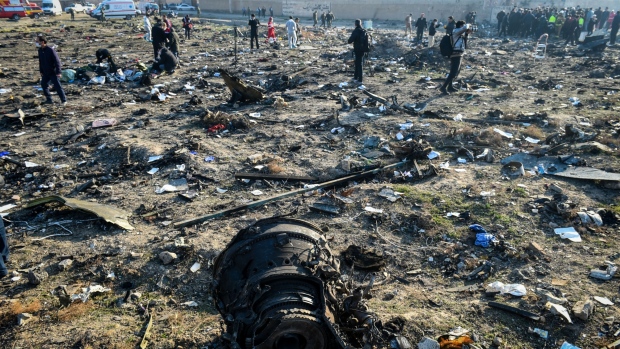 Debris from the wreckage of a Boeing Co. 737-800 aircraft, operated by Ukraine International Airlines, which crashed shortly after takeoff covers the site near Shahedshahr, Iran, on Wednesday, Jan. 8, 2020. , Bloomberg

OTTAWA -- Canadian air-crash investigators are being given access to the wreckage and have been tapped to help unlock the contents of the data recorders from a Ukraine International Airlines plane downed by an Iranian missile last week.

The two investigators are to get their first chance to visit the crash site outside of Tehran on Tuesday, as part of an international team looking into the sequence of events that ended with Flight PS752 shot out of the sky, killing all 176 people on board.

The victims include 57 Canadians, as well as dozens more who were en route to Canada.

Prime Minister Justin Trudeau says they would all be safely back in Canada if tensions between Iran and the United States had not escalated recently.

"I think if there were no tensions, if there was no escalation recently in the region, those Canadians would be right now home with their families," Trudeau said in an interview Monday with Global News, noting that in any conflict "it is always the innocent who get sideswiped."

The aircraft was shot down just hours after Iran launched air strikes against two military bases in Iraq where U.S. forces -- and also some Canadians -- are stationed. The air strikes were in retaliation for a Jan. 3 targeted drone strike by the U.S. that killed Iran's top general, Qassem Soleimani.

Trudeau said he's spoken to U.S. President Donald Trump about the need to de-escalate tensions. He also confirmed that the U.S. gave Canada no heads up that it was planning a strike against Soleimani, something Trudeau said he "obviously" would have preferred.

Kathy Fox, the head of the Transportation Safety Board, said Monday afternoon she expects Canadian investigators will have access to the remains of the plane that are being reconstructed elsewhere, with Iran leading the investigation under international rules.

She added that TSB investigators have been asked about their technical expertise in downloading data from the flight recorders, known as "black boxes," which were damaged in the incident.

The access to the wreckage and possibly the data recorders is more than the minimum Canadians are allowed under international rules that guide such investigations, with Fox calling Iran's level of co-operation encouraging.

Still, Fox said she would be pushing those boundaries to ensure answers for families of the 57 Canadians on board.

She also warned that the TSB will speak out if it believes the probe isn't complete and transparent.

"We all want answers and sharing information is a cornerstone of trust," Fox said. "The world deserves to know how and why events unfolded as they did."

After initially denying it shot down the Ukraine airliner, Iran admitted over the weekend that one of its own surface-to-air missiles took down the Boeing 737-800, but called it a horrible mistake.

The Canadian Press has independently confirmed at least 86 victims with ties to Canada, many of them students and professors returning after spending the December break visiting relatives in Iran.

Iran has taken the lead on the investigation under international civil aviation rules, with Canadians, Americans and Ukrainians playing supporting roles to varying degrees. How much information gets released will be up to Iranian officials.

"Please understand -- and we're asking the families to understand -- that we can only release information under certain constraints and we need to respect that in order to maintain the confidence of our partners in this international effort," Fox said.

The downing of the aircraft minutes after takeoff from Tehran's international airport echoed a similar incident more than five years ago. Russian-backed rebels using a surface-to-air missile have been linked to the downing of a Malaysia Airlines flight over Ukraine in 2014, killing 298 people on board.

That incident led to recommendations about flying in conflict zones, but Fox said the latest incident shows more needs to be done.

Among the questions Fox said investigators will seek answers to in this case are what sequence of events led to the missile being fired, whether it was truly an accident and why procedures that should prevent such incidents weren't followed.

"Clearly some of these questions are going to be very uncomfortable for the country to answer," Fox said.

There are also questions about why the airspace wasn't closed given Iran had fired missiles at American bases in Iraq on the same day, and why other commercial airlines were operating in the same region.

"They should have closed the Iranian airspace but they didn't," Avideh Motmaen-Far, president of the Council of Iranian Canadians, said at a press conference earlier Monday, referring to the Islamic Revolutionary Guard Corps.