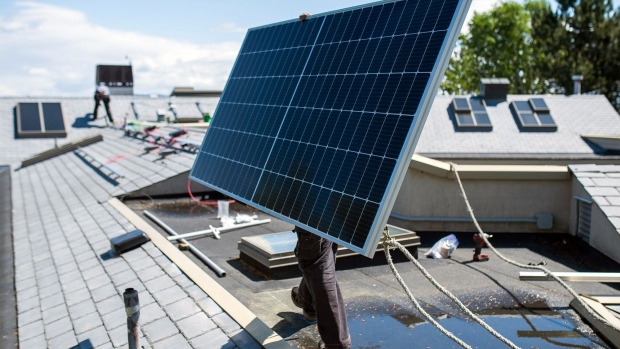 A worker moves a solar panel into position on a roof during a Shift Energy Group solar installation on a home in Victoria, British Columbia, Canada, on Tuesday, May 18, 2021. Last December, the Trudeau government outlined the steps Canada would need to take to reach net-zero carbon emissions by 2050, including government grants for homeowners for energy retrofits and a need for rooftop solar installers, CBC News reported. Photographer: James MacDonald/Bloomberg , Bloomberg

Canada started taking orders for its inaugural green bond amid a renewed global push to reduce dependence on fossil fuels after the Russian invasion of Ukraine brought reliance on non-renewable sources of energy back into the spotlight.

The world’s fourth largest oil and fifth biggest natural gas producer is marketing $5 billion (US$4 billion) of December 2029 bonds which may yield 2.5 basis points over the Canada bond due June 2029, according to people with knowledge of the matter. The transaction is expected to be priced as soon as Tuesday and dealers have already gathered orders totaling over $9.5 billion, said the people.

Canada is debuting in the green bond market as governments and investors worldwide digest the geopolitical consequences of a war pursued by an energy superpower. While the country’s green-bond program can help the government finance projects that reduce pollution, it excludes the oil and gas sector -- the biggest contributor to greenhouse gas (GHG) emissions in Canada.

“That’s a very positive thing that the Canadian government’s green bond framework doesn’t include oil and gas, because that helps to ensure its environmental integrity,” said Ben Caldecott, director of the Oxford Sustainable Finance Group at the University of Oxford. “The thing that has changed in the last three weeks is that there is much more interest in a rapid transition away from fossil fuel due to security reasons.”

Canada is excluding activities including transportation, exploration and production of fossil fuels as well as nuclear energy from the potential use proceeds of its green bonds “in recognition of the exclusionary criteria embedded in major green bond indices and green investor and market expectations,” the government said on its website.

“Canada’s oil sands producers have not only made exceptional progress in reducing GHG emissions intensity, with even more new technology awaiting deployment, but will also displace global emissions over time from poorer performing sectors and jurisdictions,” said  Ben Brunnen, vice-president, oil sands, fiscal and economic policy at Canadian Association of Petroleum Producers. “This needs to be recognized in the green and transition finance taxonomies.”

What governments include or outright exclude in their green bond frameworks are closely watched by other borrowers and lenders because there isn’t yet a global standard for these securities, which frequently allow issuers to lock into lower borrowing costs than a comparable conventional debt due to strong investor demand. For instance, in February the European Union unveiled plans to label investments in some gas and nuclear projects as sustainable.

“The argument that you’re following the status quo is pretty weak,” said John Gorman, chief executive officer at Canadian Nuclear Association, which has a member that issued the first green bond for a nuclear power program. “This is an opportunity for Canadian leadership here.”