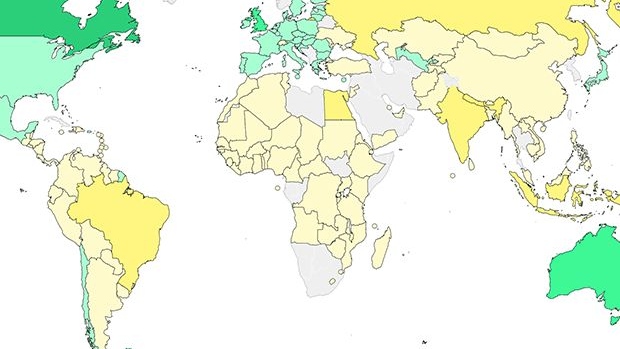 A heath worker prepares to inject the 'Gam-COVID-Vac', also known as 'Sputnik V', COVID-19 vaccine, developed by the Gamaleya National Research Center for Epidemiology and Microbiology and the Russian Direct Investment Fund (RDIF), into a patient's arm during a post-registration phase trial at the City Clinic #46 in Moscow, Russia, on Wednesday, Sept. 23, 2020. The Russian Direct Investment Fund will sell 32 million doses of Sputnik V to Mexico, with deliveries starting in November, the sovereign wealth fund said in a statement. Photographer: Andrey Rudakov/Bloomberg , Bloomberg

(Bloomberg) -- California’s new cases rose to a record with intensive-care availability at a low. Indoor dining at New York eateries will halt on Monday, dealing a setback to social and economic life, after the city breached virus benchmarks.

The Food and Drug Administration is facing White House pressure to approve the first Covid-19 vaccine for U.S. emergency use, which could begin as early as Monday. Separately, the U.S. government ordered another 100 million doses of a Moderna Inc. vaccine candidate.

Canada will begin its immunization campaign as early as Monday, with 30,000 initial doses of the Pfizer Inc. and BioNTech SE vaccine making their way from Belgium.

Quebec, which has suffered the majority of Canada’s more than 13,000 virus deaths, said it expects inoculations to start Monday. Ontario is targeting Tuesday and will give priority to health-care workers.

Los Angeles County is inviting skilled nursing homes to self-administer Covid-19 vaccines, rather than using a federal pharmacy partnership program that relies on CVS Health Corp. and Walgreens Boots Alliance Inc., in a bid to save time.

Barbara Ferrer, the county’s public health director, said she expects allocations to start about Dec. 21, sooner than the pharmacy partnership program, which will begin at the end of December. The vaccine will be from Moderna after it gets approval from the FDA.

Illinois Governor J.B. Pritzker said restrictions put in place last month, such as a ban on indoor dining, are helping control the Covid-19 surge and he sees no need for a statewide stay-home order

Pritzker didn’t say at a news conference when existing mitigation measures might be lifted.

The U.S. government will buy an additional 100 million doses of a vaccine candidate known as mRNA-1273 from Moderna Inc. If authorized by the FDA for emergency use, the vaccine would being shipping immediately and be provided at no cost to Americans, the Department of Health and Human Services said in a statement.

Securing 200 million doses provides for continuous delivery through next June, according to HHS.

Austria is easing limits for gatherings to allow as many as 10 people to meet on Christmas Eve and Christmas Day, Chancellor Sebastian Kurz told journalists on Friday. After that and including New Year’s Eve, the limit will revert to a maximum of two families. Also, provincial governments are getting the option to impose mandatory face coverings in highly popular outdoor locations.

White House Chief of Staff Mark Meadows said that FDA Commissioner Stephen Hahn’s job could be on the line if his agency doesn’t soon approve Pfizer Inc.’s coronavirus vaccine, according to a person familiar with the matter.

The warning came in a phone call with Hahn on Friday intended to push the Food and Drug Administration to swiftly approve the vaccine. In a statement, Hahn disputed a Washington Post report that Meadows told Hahn to submit his resignation if the vaccine doesn’t receive an emergency-use authorization by the end of the day.

New Jersey will be ready to distribute a Covid-19 vaccine within a few days of its approval, Governor Phil Murphy said Friday after getting a “sobering” picture of the pandemic from Deborah Birx, the White House coronavirus coordinator.

Front-line health-care workers will get the first doses, he said. Officials expect roughly 76,000 doses in the first batch and more in the following weeks, according to state Department of Health Commissioner Judy Persichilli.

“We are now in the opening scenes to the end of the pandemic,” Murphy said, while encouraging continued vigilance. New Jersey reported 3,821 new cases, and a 9.95% positivity rate as of Dec. 7.

California reported a record 35,468 new coronavirus cases Friday, a 2.4% increase from the previous day, and 159 deaths. The state’s tally now sits at 1.49 million infections and 20,622 fatalities in total.

A stay-home order was imposed on about two-thirds of the state’s population over the weekend as the availability of intensive-care unit beds declined.

Hospitalizations jumped 3.6% in 24 hours to a record 12,940 patients. Just 1,450 ICU beds remain available in the state, the fewest since data were tracked at the start of the outbreak.

California’s test positivity rate of 9.7% is the highest since an earlier peak in April as the virus continues its spread in the latest wave.

U.K. health authorities reported 21,672 new Covid-19 cases, bringing the total to more than 1.8 million since the pandemic began. Deaths increased by 424 to 63,506, according to government data on Friday.

The World Health Organization will review vaccines by Pfizer, BioNTech, Moderna and AstraZeneca over the “next couple of weeks” to determine whether to grant them emergency-use licenses, WHO Chief Scientist Soumya Swaminathan said Friday.

Several countries and global procurement agencies such as UNICEF rely on WHO’s pre-qualification services for vaccines and drugs, Swaminathan said.

France’s pace of new cases increased further over the past week, with the seven-day average of daily cases approaching 12,000 on Friday, according to official data.

Prime Minister Jean Castex on Thursday canceled plans to reopen theaters, museums, cinemas and sports facilities next week as the government’s target for reducing average new cases to 5,000 a day by Dec. 15 remains out of reach. In contrast, hospitalizations and the number of patients in intensive care are still declining after peaking in mid-November.

Cuomo said hospitalization rates across the state are increasing dramatically, and called them the “ultimate cause for concern,” even though the death rate has dropped to 8% from 23% in the spring and there are 30% fewer intensive-care patients.

The U.S. Food and Drug Administration is scrutinizing reports of allergic reactions to Pfizer Inc.’s Covid-19 vaccine as it readies an emergency-use authorization.

There have been reports of serious allergic reactions to the vaccine in the U.K. After starting immunizations Tuesday, the U.K.’s National Health Service said people with a significant history of allergies shouldn’t receive the shot.

The FDA is seeking more information on the reactions from the U.K. drug regulator, Marion Gruber, director of the Office of Vaccines Research and Review, told a committee of agency advisers Thursday.

“Indicators have all unfortunately surpassed their thresholds,” the mayor said on Friday at a briefing.

Assuming federal government approval of a vaccine by the weekend, the city plans to begin distribution “in a matter of days,” focusing on front-line health-care workers and nursing homes first, de Blasio said.

It will open a vaccine command center Monday, and a task force will partner with 200 community organizations to ensure fair and equitable distribution. Twenty-seven Black and Latino communities that bore the brunt of the virus will get priority in vaccine distribution, de Blasio said.

Portugal reported a record 95 deaths on Friday, four more than the previous high on Nov. 16. Cases increased by 5,080, according to the Health Ministry, less than the daily record of almost 7,000 recorded three weeks ago. Patients in intensive-care units fell by two to 507.

Singapore is tightening border measures in light of the worsening outbreak in Hong Kong, according to the city-state’s health ministry.

All travelers entering Singapore from 11:59 p.m. on Sunday who have a travel history in the past 14 days to Hong Kong will be required to serve a 14-day stay-home notice at dedicated facilities.

The FDA intends to proceed toward emergency use authorization of the Pfizer-BioNTech vaccine, he said.

The FDA said it will “rapidly work toward finalization and issuance” of an emergency use authorization following Thursday’s advisory meeting on Pfizer and BioNTech’s Covid vaccine.

The agency said it had notified the Centers for Disease Control and Prevention, and Operation Warp Speed so they can execute plans for vaccine distribution.