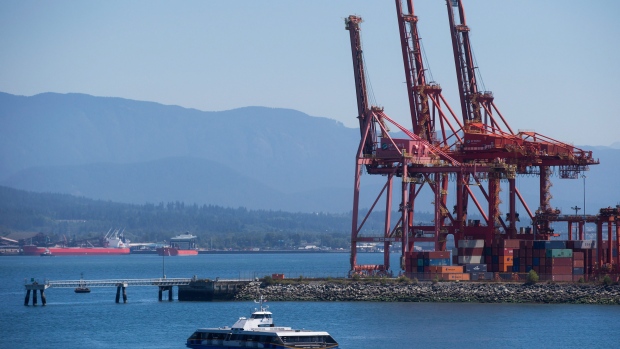 Canada's trade deficit narrowed sharply to just $135 million in March as exports surged to a new high on shipments of energy products, an early sign the first quarter ended strongly.

Statistics Canada said on Thursday that the value of exports jumped by 3.8 per cent to $46.98 billion as volumes increased by 2.5 per cent and prices grew by 1.3 per cent.

Analysts in a Reuters poll had forecast a shortfall of $800 million. Statscan revised February's deficit to $1.08 billion from an initial $972 million.

The Canadian economy stalled in February after a healthy start to the year, data showed last week.

"A strong first indicator on March GDP suggests there could be some decent momentum heading into the second quarter," CIBC economist Nick Exarhos said by phone.

Energy products rose seven per cent, pushed up by higher natural gas flows to the United States and a spike in exports of coal to Asia that coincided with a slowdown in Australian production caused by a cyclone.

Imports grew 1.7 per cent to $47.11 billion on higher inward flows of metal and non-metallic mineral products, particularly unwrought gold from Japan. Volumes slipped by 0.2 per cent while prices advanced by 1.9 per cent.

"The increase in imports points to improvements in business investment spending and inventory rebuilding, both contributors to GDP," National Bank economist Krishen Rangasamy said in a note to clients.

Despite the cheery trade news, challenges may be ahead.

In April, the Bank of Canada lowered its export growth forecast to 2.5 per cent over the next three months from around 3.0 per cent in January due to the additional drag on global investment from uncertainty over U.S. trade policy.

Exports to the United States, which accounted for 73.1 per cent of all Canadian exports in March, edged up by 0.1 per cent while imports increased by 2.0 per cent. As a result, Canada's trade surplus with the United States slipped to $3.97 billion from $4.51 billion in February.