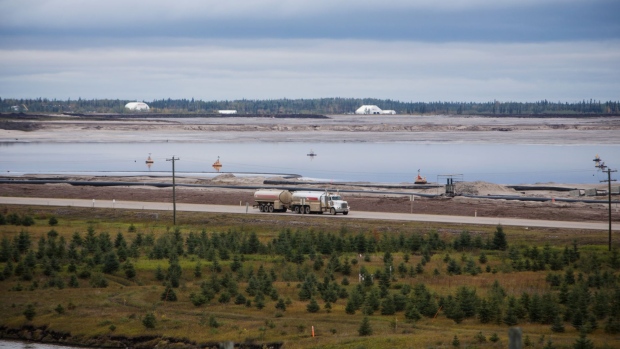 A truck drives past a tailings pond at the Syncrude Canada Ltd. facility in the Athabasca oil sands near Fort McMurray, Alberta, Canada, on Sunday, Sept. 9, 2018. New technologies such as driverless trucks and froth-treatments that eliminate the need for multibillion-dollar upgraders -- along with U.S. benchmark crude prices closer to $70 -- are helping make the industry profitable again. , Bloomberg

(Bloomberg) -- Canada’s trade deficit shrank more than economists had expected as exports of vehicles and oil climbed, while imports continued to decline.

Exports rose 6.7% in the month, Statistics Canada said Thursday in Ottawa. Imports fell 3.9%, narrowing the nation’s trade gap to C$677 million ($499 million), from a revised C$4.3 billion in April. The median estimate of economists surveyed by Bloomberg called for a C$3 billion gap in May.

The most recent data show how global demand for Canadian products is slowly coming back to life as economies around the world begin reopening. Yet, after Canada’s trade with the rest of the world plunged by the most ever in April, it’s expected to take a while before shipments return to more normal levels. Both exports and imports in May were still down about one-third from year ago levels.

“Trade is the lifeblood of Canada’s goods sector, but even with exports seeing some improvement in May, we’re still a long way from clearing out the clots that emerged in the coronavirus recession,” Avery Shenfeld, chief economist at Canadian Imperial Bank of Commerce, said in a report to investors. Shenfeld said “shipping times” from overseas factories may have factored into the drop in imports.

Canada has been hit doubly hard by the both the pandemic-related shutdowns and collapse in energy prices. But prices rebounded somewhat in May, helping crude oil exports rebound 26%. That’s still about one-third the level of oil shipments in January, the agency said.

Exports of motor vehicles and parts also picked up as auto plants restarted production globally, gaining 76%. That too, however, is still just around 20% of year ago levels.

Imports in the auto industry continued to fall in May, because foreign manufacturers have been prioritizing the U.S. market before exporting to other countries, according to Statistics Canada.

Combined imports and exports rose to C$69.9 billion in May, after dropping to a decade-low of C$69.2 billion in April. Total trade remains 29% below February’s level.

“Overall, the narrowing in the trade deficit is welcome, but with exports and imports still both down by roughly one-third from a year ago, this is only the first baby step along the road to recovery,” Paul Ashworth, chief North America economist at Capital Economics, said in a report. “And, if the resurgence of infections south of the border holds back the US recovery, Canadian exporters could find that road to be a very bumpy one in the coming months.”

(Updates with economist quotes, details throughout)