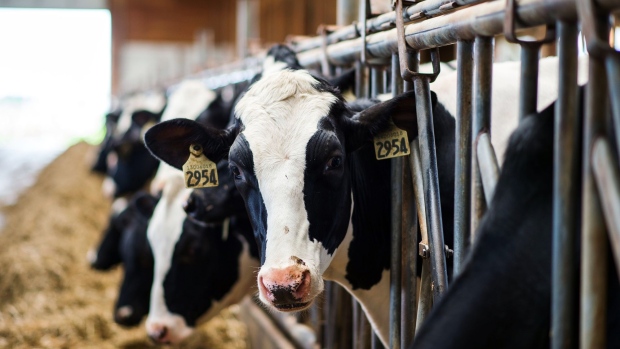 Cows stand in a barn at the Pickmick Dairy farm in Delta, British Columbia, Canada, on Thursday, July 11, 2019. , James MacDonald/Bloomberg

The Canadian government has narrowed its timeline to release the remaining $1.4 billion of federal aid to supply-managed dairy farmers by about five years, and set separate aid for poultry and egg producers.

The Ministry of Agriculture and Agri-Food had originally announced $1.75 billion would be provided to compensate Canadian dairy farmers over eight years.

Agriculture Minister Marie-Claude Bibeau said Saturday in Ottawa that after the initial $345 million payout was awarded between December and January, it has now set a schedule to deliver the remaining funds in three years.

“Our government is fully behind our supply management sector, which supports our family farms and the vitality of our rural areas,” Bibeau said in a statement. “Today’s announcement of a substantial compensation package for our dairy, poultry and egg farmers shows our support for a strong supply management sector for many generations to come.”

Canada has promised funds to dairy and poultry farmers whose market share was hurt by free trade deals with Europe and countries on the Pacific Rim.

“The level of certainty provided by this announcement enables us to be in a better position in terms of innovations and efficiencies to better compete with increase imports of dairy products made from foreign milk,” said Pierre Lampron of the Dairy Farmers of Canada.

“Farmers have waited a long time to see action on this file, and we believe that this is a step in the right direction,” said Brian Bilkes, chair of Canadian Hatching Egg Producers.