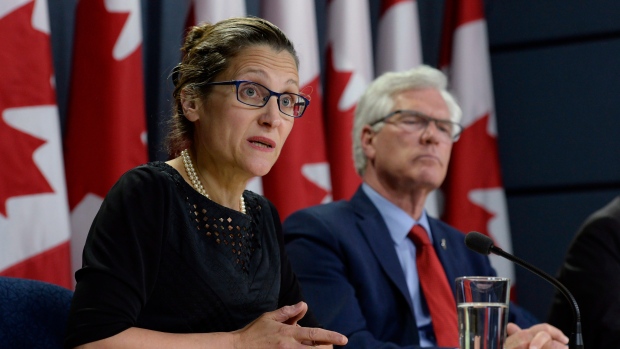 The package announced today includes loans and loan guarantees to help cushion the blow for forestry companies and to help them exploring new markets and innovations.

"By diversifying into a variety of markets, we will be less vulnerable to actions from any one market and today we stand with softwood companies, their employees and their communities to support good jobs to create new opportunities and ensure sustainable prosperity for generations to come."

Carr added that the government would 'vigorously' fight duties from the U.S.

The money also includes measures to support workers who want to upgrade their skills and transition to a different industry.

Cabinet discussed the options for a package last month, but the federal government wanted more input from the provinces via the special working group Carr established in February.

On April 28, the U.S. Department of Commerce slapped countervailing import duties as high as 24 per cent on Canadian softwood, arguing Canada unfairly subsidizes its industry by keeping the price of logging artificially low.

Carr's statement described the package as defending Canada's interests against those duties, which he described as an "unfair and unwarranted" trade action.

"A negotiated settlement is not only possible, but in the best interests of both countries."

The government has been careful to characterize the money as a support package, not a bailout, in order to avoid running further afoul of protectionist forces in the United States.

"Any action has the potential of carrying trade risks; we believe we have been prudent," Carr said.

"We believe that this group of measures across the sector ... is an appropriate response that is one we think will stand the test of scrutiny."

The federal government developed a "strong, collaborative relationship" with the provinces on the file, he added. "We are speaking with one voice."

Carr has repeatedly called the American allegations baseless, saying the U.S. has lost repeatedly when challenged by Canada before the World Trade Organization or under the North American Free Trade Agreement.

Freeland was asked Thursday about the chances that a new softwood agreement could be part of a new NAFTA, but she refused to answer what she described as a hypothetical question.

On Wednesday, the Conference Board of Canada released a report saying Canadian softwood producers would pay $1.7 billion in duties a year and cut 2,200 jobs and $700 million in U.S. exports over the next two years before the dispute is settled.

On June 9, the U.S. Department of Commerce is set to decide an anti-dumping claim against Canadian softwood producers, and is expected to add as much as another 10 per cent tariff on top of the countervailing duties.

Canada can't file an appeal of the tariffs until early next year because the final determinations from the U.S. government on the softwood issue won't be made until late fall.

It took Canada four years to reach a negotiated settlement the last time, and 15,000 workers lost their jobs in the first year alone. Canadian producers paid about $5 billion in duties then, 80 per cent of which had to be returned to them as part of the negotiated settlement.

This time around, a low Canadian dollar and high market demand for softwood is helping to cushion the blow.

The aid package will include a push to get Canadian companies to do more of the value-added work on softwood in Canada. That means instead of exporting raw logs, Canadian companies use the logs to make doors and window frames, furniture and countertops.

But to hear Carr tell it, Canada is far from finished on plotting the way forward.

"Our work is not done; This is the beginning, not the end," he said.

"We will continue to work with our counterparts to ensure we are responding to new pressures on the industry, and we will consider additional measures, including additional loans and loan guarantees to address changing market conditions."