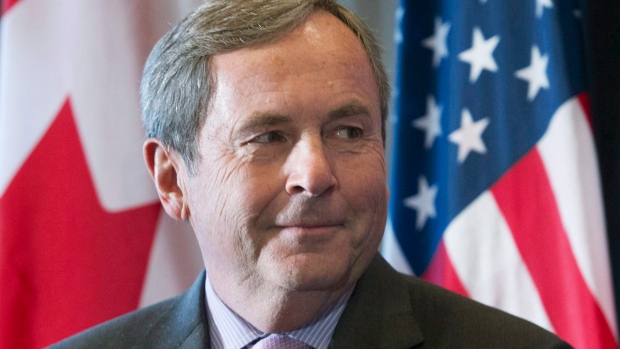 WASHINGTON -- Substantial progress has been made in the NAFTA discussions over the last few days, Canada's ambassador to the United States said Tuesday as he admitted feeling more hopeful than he has in some time.

"I'm optimistic. I am confident that we are going to move forward," David MacNaughton told a gathering of the American Association of Port Authorities.

"Certainly the environment is conducive to making a lot more progress in the next short while."

That assessment comes after a below-the-radar round of high-level discussions in Washington.

Foreign Affairs Minister Chrystia Freeland was in town last week to meet with U.S. trade czar Robert Lighthizer, who has said he is hoping for an agreement in principle within weeks.

First, there have been some breakthroughs on the thorny issue of automobiles, he said. MacNaughton hinted that a controversial U.S.-specific content requirement might still be on the table, but said the Americans have offered some creative ideas that build on a Canadian proposal from two rounds ago.

His other stated reason for optimism is the tone of recent talks -- which he described as warmer.

The U.S. has said it hopes to wrap up an agreement in principle within weeks, to secure a deal before elections in Mexico and in the U.S. Congress. It's hard to know if that can be achieved, said MacNaughton, adding that the talks can't be dictated by false deadlines.

But Canada would be willing to meet 24 hours a day, seven days a week in order to make it happen, he said.

A lengthy round of talks is expected to start in Washington, D.C., in early April. But MacNaughton said the sides have been speaking frequently in recent weeks, both in person and by phone.