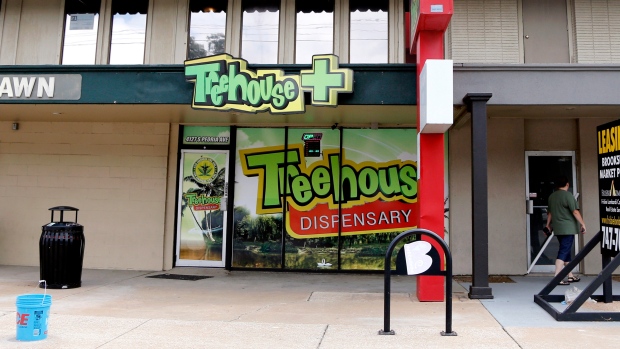 TULSA, Okla. - A Canadian animation studio and media company is suing an Oklahoma medical cannabis dispensary chain accusing it of infringing copyright by using a logo long-established in programming aimed at children.

Nelvana Enterprises Inc. filed a lawsuit in federal court in Tulsa last week that alleges Treehouse Dispensaries "wilfully copied and is using a confusing similar imitation" of a logo it has used in children's television programming since the 1990s, the Tulsa World reported.

Nelvana, based in Toronto, said Treehouse Dispensary promised to stop using the logo but didn't provide a timeline and neglected to follow through on its word in a timely manner. United States Patent and Trademark Office records show Nelvana registered "TREEHOUSEDIRECT" as a trademark Nov. 27, 2007.

"Plaintiff has received complaints from parents and teachers in Oklahoma who are concerned that Plaintiff is selling cannabis or otherwise affiliated with Defendant," the lawsuit, filed by Tulsa firm McAfee and Taft, states. It goes on to note the confusion is especially troubling because the Treehouse brand is built around entertainment and products for children and that "hijacking of a children's brand to sell cannabis products" sullied its reputation.

A side-by-side example of the "Treehouse" logos from children's entertainment company Nelvana Enterprises, left, and Treehouse Dispensary LLC are seen in a screenshot from a federal lawsuit filed on behalf of Nelvana, claiming trademark infringement. https://t.co/TNwQnenO2y pic.twitter.com/FNtN3fpS4K

Nelvana is pursuing financial damages from revenue that Treehouse Dispensary earned while using the logo at its various locations in Oklahoma. The company also wants a court mandate ordering the confiscation, delivery and destruction of any cannabis products that infringe Nelvana's rights to its logo.