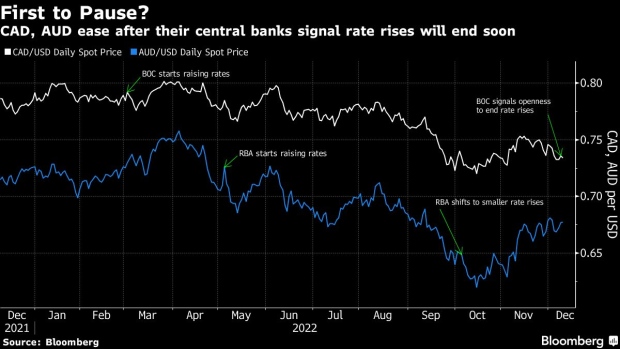 (Bloomberg) -- The performance of the Canadian and Australian dollars this week is a hint of what’s to come for policy makers who don’t keep pace with the Federal Reserve.

The loonie fell 1.1% against the US dollar since last Friday even as the Bank of Canada delivered a bigger hike than some traders expected, as officials hinted they are considering a pause to their nine-month long tightening cycle. The aussie was little changed even as the Reserve Bank of Australia hiked again, as policy makers also signaled they are almost done raising interest rates.

The looming end of both tightening campaigns is a major milestone for these central banks, which started hiking earlier this year to combat rampant inflation. But with the Fed expected to keep raising rates to about 5% by March, it puts their currencies at risk. Money markets imply Canada’s rates peaking slightly above 4.5% by early 2023, while Australia’s benchmark is seen reaching as much as 3.6%.

“This week’s move in CAD could very well be a canary in the coal mine for other high-beta currencies,” said Jay Zhao-Murray, a currency analyst at Monex Canada in Toronto.

The BOC, which raised rates by 400 basis points since March to 4.25%, has signaled concern about growth, saying in its rate decision statement there’s growing evidence that tighter monetary policy is curbing domestic demand. It was the first time since the start of this tightening cycle that the language on future hikes has substantially changed. In previous decisions, the bank included a line clearly indicating that rates would need to rise further.

“The narrative has shifted away from the size of the hike to: Will they hike or not?,” said Canadian Imperial Bank of Commerce currency strategist Bipan Rai about Canada’s rate decision. The bank says the loonie could drop toward 1.38 per US dollar by the end of the year, though the move may not last long as the Canadian currency is still seen as oversold.

The RBA, which lifted borrowing costs by 300 points since May to 3.1%, was the first developed economy to downshift to quarter-point hikes in October and has signaled a potential pause ahead to assess the impact of moves so far. The front end of the nation’s yield curve was inverted for the first time in 21 months, underscoring investor doubts as to whether the central bank can continue to raise its policy rate in the face of rising recession risks.

More central banks are expected to gear down the pace of tightening next week. Markets are pricing in a smaller 50 basis point rate hike each from the Fed, the Bank of England and the European Central Bank, although none are seen ending their hiking campaigns just yet. The Swiss National Bank and the Norges Bank are also expected to slow the pace of tightening next week.

The BOC’s stop signal was accompanied by a hefty 50 basis point rate rise on Wednesday, breaking with the conventional thinking that central banks will gradually slow the pace of tightening before stopping.

“It could be another leg lower from here if markets start to speculate more seriously on what happens after a pause,” said Lee Hardman, a currency analyst at MUFG Bank Ltd. “Markets are expecting many central banks to reach a peak in rates next year, but if they do it in an abrupt way, or stop the hiking cycle sooner than expected, that could have a negative impact on their currencies.”