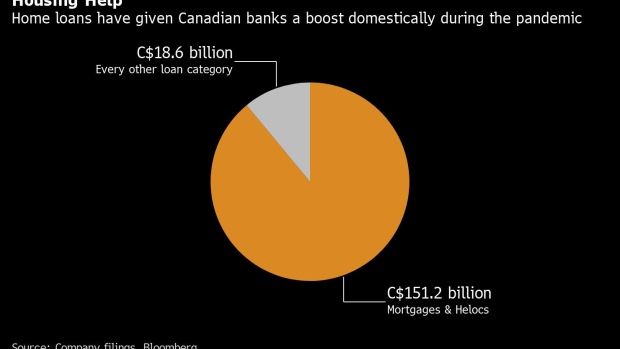 The CN Tower from Bay Street In the financial district in Toronto, Ontario, Canada, on Monday, Nov. 22, 2021. Many of Canada’s large financial firms say they have a growing portion of their workforces back in the office and the numbers are expected to swell in the New Year. Photographer: Cole Burston/Bloomberg , Bloomberg

(Bloomberg) -- Canada’s big banks have weathered the pandemic on the strength of the country’s heated housing market. This week, they’ll get the chance to show whether they also have other avenues for loan growth.

Surging home prices and strong sales have boosted Canadian residential mortgage and home-equity credit balances at the country’s six biggest banks by C$151.2 billion ($118.2 billion) in the past year and a half. That 13% growth outstrips the gain of just 2.8% for all other types of loans from the banks’ domestic divisions since before Covid-19 took hold in North America.

Housing gains, along with government support programs that prevented a wave of defaults, have helped Canadian banks return to pre-pandemic levels of profitability and put them in position to increase dividends and resume stock buybacks. As the country’s biggest lenders report quarterly earnings this week, investors are watching to see if the firms’ other business lines can pick up significantly before next year’s expected interest-rate increases threaten to cool the housing market.

“If you’re counting on growth in loans and acceptances as your story for why you’re constructive on Canadian banks today, it appears that real estate-secured balances are stretched here, so you’d need to be looking at other categories,” said Kevin Burkett, who helps oversee C$180 million in assets as a portfolio manager at Burkett Asset Management Ltd. in Victoria, British Columbia.

Growth may pick up for other consumer loans while gains in business borrowings are likely to be muted, he said. For Burkett, the stronger case for buying bank shares rests on continued improvement in credit quality, reducing provisions for potential loan losses, along with wider lending margins as interest rates climb and the potential for increased dividends and share buybacks.

The S&P/TSX Commercial Banks Index has gained 30% this year through Friday, topping the 21% advance for the broader S&P/TSX Composite Index.

The Canadian banks are set to announce their first dividend increases and buybacks since the pandemic took hold after the country’s top banking regulator gave them the green light to do so earlier this month, ending a temporary ban put in place in March 2020 to protect the financial system.

The average dividend increase for the six biggest Canadian banks may be about 20% for fiscal 2022, with Bank of Montreal and National Bank of Canada likely to post the largest hikes, according to National Bank analyst Gabriel Dechaine. Life-insurance companies Manulife Financial Corp. and Sun Life Financial Inc., which also were subject to the payout restrictions, have already announced their increases, with Manulife boosting its dividend 18% and Sun Life raising its payout 20%.

“We had originally anticipated a multiquarter pace to move payout ratios to the midpoint of 40-50% target ranges,” Dechaine wrote in a note to clients last week. “Given what we saw from the Canadian lifecos recently, we believe the  is much shorter.”

Also being watched as banks report their results: whether the lenders continue setting aside money to cover potential bad loans, or release provisions they’ve already built up. Of the Big Six, only Royal Bank of Canada is expected by analysts to release provisions for credit losses this quarter, while the rest are projected to continue their set-asides.

However, when the six companies reported their fiscal third-quarter earnings, five of them released provisions even though analysts had projected they’d put more aside. Only Bank of Nova Scotia took fresh provisions, and the set-aside was just 71% of what analysts had expected.

Banks’ decision to take smaller provisions or even release previous set-asides could be a main source of earnings beats in the quarter, said Barclays Plc analyst John Aiken. He estimates total provisions of C$1.3 billion for the six banks in the fourth quarter, compared with net recoveries of C$391 million in the third quarter.

“Amidst the ongoing economic recovery and employment levels that have rebounded to pre-pandemic levels, we maintain that the banks may have managed to side-step the potential delinquencies and credit losses that had previously been anticipated,” Aiken said in a research note this month. “With the improving macro outlook, credit could come in better than expected, spurring upside earnings surprises.”

Another area of focus in the quarterly results will be the banks’ capital-markets divisions. While those units benefited from a surge of volatility in markets early in the pandemic, that strength in trading has gradually faded. Increases in initial public offerings, debt and equity sales, and merger-and-acquisition advisory work have helped pick up the slack.

The banks’ capital-markets divisions may post a 2% revenue drop from a year earlier for the fourth quarter, on average, Canadian Imperial Bank of Commerce analyst Paul Holden estimated. That would work out to a 5% drop from the third quarter, he said.

“Strong capital markets-related revenue buoyed earnings during the pandemic,” Holden said in a note to clients last week. “Now the question is whether banks will be able to achieve positive pretax, pre-provision growth as capital markets normalize.”