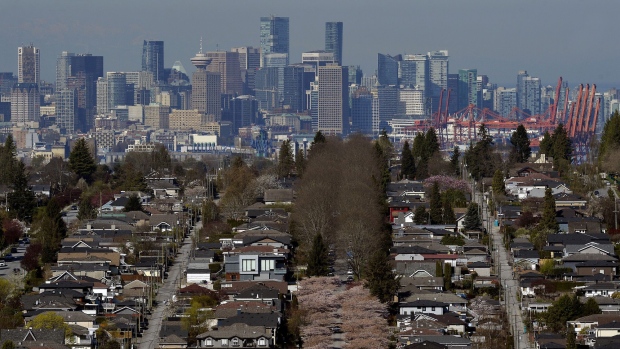 A bird flies between office towers in the financial district of Toronto, Ontario, Canada, on Friday, May 22, 2020. Whether the PATH, a subterranean network that provides connections between major commuter stations, over 80 properties, including the headquarters of Canada's five largest banks, and 1,200 retail spots, can return to its glory days will depend initially on how quickly Bay St. firms return workers to their offices. , Bloomberg

(Bloomberg) -- Instead of waiting to see whether Canadian policymakers manage a soft landing for the economy, banks are hoarding cash by selling mortgage covered bonds around the world at the fastest pace on record.

The nation’s lenders, including Royal Bank of Canada and Toronto-Dominion Bank, raised over 52.2 billion euros ($53.3 billion) by issuing the debt mostly in euros, pounds and US and Australian dollars so far this year, according to data compiled by Bloomberg. That makes them the world’s largest issuers of widely marketed covered bonds in 2022 with around 19% of all sales, beating out German and Swedish lenders.

Canada’s consumer price inflation accelerated in June to the highest level since January 1983 -- with higher gasoline prices being a main culprit -- adding to expectations the Bank of Canada will continue aggressive interest rate hikes. That in turn threatens to bite into household wealth, forcing some to draw on savings to pay down debt as their leverage runs at close to record levels amid a years-long housing boom that’s now rapidly cooling off.

“Part of the increase in Canadian covered bond supply is that Canadian banks are concerned about deposit outflows as savings rates come down with energy prices going up, disposable income is coming down,” said Cristina Costa, a Paris-based covered bond analyst at Barclays Plc. “Banks appear to be increasing wholesale funding to protect themselves from outflows.”

Sales of the secured debt -- whose financing is cheaper for banks than unsecured debt -- have been driven by money manager demand, favorable market conditions, and refinancing activity, “despite Canadian home prices being overvalued by nearly 30%,” Fitch Ratings wrote in a July 13 report.

Covered bonds were pioneered in 18th-century Prussia, when Frederick the Great let aristocrats, churches and monasteries raise money by pledging their estates as collateral. They typically have higher credit ratings than banks’ unsecured debt because they have a senior guarantee from the issuer and first call over specific pools of assets, residential mortgages in the Canadian banks’ case.

Among recent deals, TD sold 2.5 billion euros of covered bonds due in July 2025, which were quoted Thursday at a yield of around 1.52%, equivalent to around 70 basis points over the Canadian government yield curve once swapped into loonies, according to Bloomberg data. TD’s senior unsecured bail-in bonds due in March 2025, in contrast, are quoted at a spread of around 126 basis points, according to Bloomberg prices.

Canadian covered bonds remain an attractive funding option even as the extra yield investors demand to hold such debt in euros instead of the safest government bonds doubled this year. The cost stood at 91.6 basis points as of Thursday, or 2 basis points shy of the widest spread since 2011, according to a Bloomberg index. Supply of the bonds is increasing as the volume of households’ residential mortgages outstanding surpassed C$2 trillion ($1.56 trillion) for the first time in May, up from C$1.85 trillion a year earlier and C$1.67 trillion in May 2020, according to government data.

Household debt as a proportion of disposable income stood at 182.5% at the end of the first quarter, down from a record 185% in the final quarter of 2021, according to government data released in June. Net worth rose 2.6% to C$17.6 trillion, driven by gains at that point in the housing market, though prices declined for a third straight month in June.

Bank of Canada, which is unwinding the extraordinary liquidity and asset purchase programs put in place at the start of the pandemic, has so far raised its benchmark rate by 225 basis points to 2.5%. That’s the highest since the credit crisis in 2008, and it could increase by another 100 basis points by the end of this year, based on implied rates in the swap markets.

“We expected higher supply out of Canada versus previous years. Nevertheless, the current amount is above our expectation,” said Daniel Rauch, a Frankfurt-based money manager at Union Investment. “The mix of higher mortgage origination, question marks regarding the deposit base, diminishing central bank support and a rather, from an issuer’s point of view, difficult senior market fueled the dynamic.”