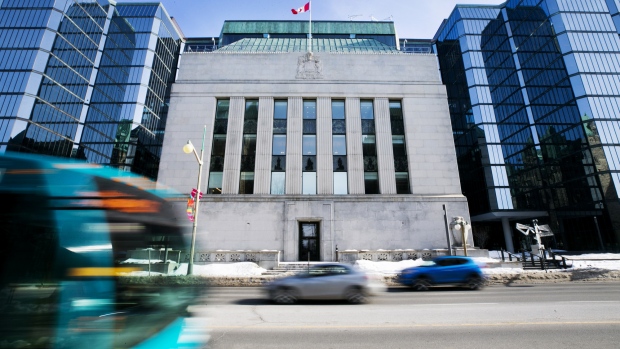 Canadian firms reported a slight increase in sentiment in the third quarter, with a pick-up in investment intentions and capacity constraints that may give the central bank less reason to lower rates.

The Bank of Canada’s autumn survey of executives showed a moderate outlook for future sales along with “healthy” spending plans outside the Prairie provinces, and robust employment intentions in the central part of the country and British Columbia. That’s despite concern that firms will be negatively affected by slower U.S. economic growth.

The central bank’s composite gauge of sentiment moved up slightly, but remains below the high levels reached in 2017 and 2018. The Ottawa-based central bank changed the methodology for the indicator, resulting in revisions in the data set back until 2003.

“Results from the autumn Business Outlook Survey indicate that business sentiment improved slightly, but regional differences are more pronounced,” the Bank of Canada said in a release. “Positive views in Central Canada contrast with widespread weakness in the Prairies.”

The survey is the last public communication from the Bank of Canada before its Oct. 30 interest rate decision and Monetary Policy Report. Economists are split on whether the central bank will cut rates before the end of this year.

Businesses are citing immigration and strong activity in the information technology and non-residential construction industries as factors supporting sales. However, for companies tied to the energy sector, this reflects simply modest improvement from falling sales.

The improved outlook for business sentiment is a surprise given continued trade rhetoric between the U.S. and China, suggesting some executives are brushinig off some of the shifting nuances of the negotiations
Bank of Canada Governor Stephen Poloz puts significant weight on the survey, which he considers an important supplement to harder economic data. The survey, however, suggests both soft and hard data are telling the same story of a still healthy economy that’s not headed for an overly sharp slowdown in the second half of this year.
“Add it all up, and its in line with an economy growing somewhere close to its non-inflationary potential in Q3, a picture that likely leaves the central bank waiting to see how Q4 shapes up before signalling a move on rates,” Avery Shenfeld, chief economist at Canadian Imperial Bank of Commerce, said in a note to investors.