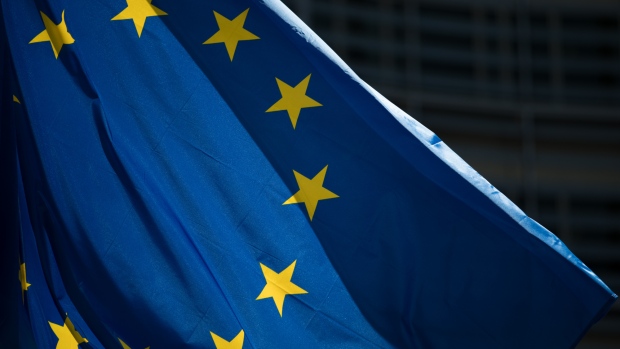 The stars of the European Union (EU) sit on a flag flying outside the European Commission building during the start of Brexit negotiations in Brussels, Belgium, on Monday, June 19, 2017. , Bloomberg/Bloomberg

MONTREAL -- In a warehouse on the outskirts of town, European trade commissioner Cecilia Malmstrom surveyed rows of boxed-up electric bicycles bound for bike-share systems from Honolulu to Sao Paulo.

"I wouldn't bother with the Netherlands," she said to PBSC Urban Solutions' CEO. "Too flat."

With freshly-inked deals in Spain and France, the Montreal-area provider of bike-sharing solutions exemplifies the possibilities of the year-old Canada-EU free trade accord.

Still, Malmstrom says a lack of awareness in Canada and a wave of anti-globalization nationalism abroad may be contributing to the country's sluggish start to seizing opportunities in the Comprehensive Economic and Trade Agreement (CETA).

"The biggest hurdle is that not enough companies are aware of its possibilities," Malmstrom said in an interview Wednesday.

"And we have a wave of politically quite nationalistic governments and political parties in the European Union. We are trying to overcome that anti-globalization feeling -- true feelings that people feel left behind in the economic crisis.

"Trade is used by some political parties for blame," she added.

CETA has been in effect provisionally for one year, eliminating tariffs on 98 per cent of goods flowing between Canada and the European Union, according to Global Affairs Canada.
However, figures from Statistics Canada show that after years of modest growth, Canadian exports to the EU grew just one per cent year-over-year in the first 10 months after CETA's implementation. Meanwhile, imports from the EU shot up more than 12 per cent between October and July, compared to the same period in 2016-17.

"It does show that Europe has been a little quicker out of the gate compared to Canadian businesses," said Mark Agnew, director of international policy at the Canadian Chamber of Commerce.

"Part of the pitch that Canada makes about the value of inward investment is that you have access to the North American market. And obviously if NAFTA is not there, it becomes a little more difficult to pitch that narrative when talking to investors."

Building relationships and supply chains takes time, he stressed, and the Europeans have more experience in diversifying trade.

"It is a tough grind to be out there and pound the pavement with buyers on the other side of the ocean," Agnew said.

The strained relations between the U.S. and both Canada and the EU -- President Donald Trump slapped hefty tariffs on steel and aluminum imports from both jurisdictions in May -- should underscore the need to find more trade partners, he added.

Canadian aluminum exports to the EU surged 206 per cent in the 10 months after Sept. 21, 2017, when a three per cent tariff was dropped. Exports of motor vehicles and parts to Europe shot up 96 per cent as more passenger vehicles headed across the Atlantic, benefiting from lowered car tariffs of 7.5 per cent this year from 10 per cent in 2017 amid a phase-out that stretches to 2024.

A trade imbalance isn't inherently something to avoid, said Jason Langrish, executive director of the Canada Europe Roundtable for Business.

"Canadians could be buying productivity-enhancing equipment from Germany and using that to make their operations more efficient within Canada -- and then exporting more to China and the United States," he said.

He and Malmstrom say it is still early to draw conclusions on the trade imbalance.

Malmstrom said she aims to "defend the multilateral trading system" and "disagree 1/8s 3/8 profoundly with the notion that trade wars are good and easy to win." But she acknowledged that many view that trading system as a curse, not a boon, and that some regions lose out, despite aggregate job growth and wealth creation.

"That is a brutal reality, and of course it is up to politicians to make sure that the benefits of trade -- because they are clearly there -- are distributed in a way that those regions who are not that competitive...do benefit," she said.

Malmstrom said a timeline for ratification by all 28 EU member states remains elusive, with Italy's seven-month-old populist government casting doubt on the deal.

"I have heard and I've seen the political rhetoric in Italy. Let's see if they really want to vote this down," she said.

Malmstrom noted she met recently with the Italian trade minister, who she said stressed further review before voting on CETA.

Investor protection provisions, which involve the creation of a new court system to resolve disputes between investors and governments, cannot enter into force even provisionally until member states give the thumbs-up.

Technical details and regulatory wrinkles remain on everything from pharmaceuticals to "geographical indicators," which essentially patent the local names of European products, such as Roquefort cheese and Champagne.

Use of feta, asiago and gorgonzola as well as "Irish cream," among others, were recently in dispute, for example. Phasing out some GIs on Canadian products or grandfathering them in for others remain options, Malmstrom said.

The trade commissioner stressed that CETA, despite its ongoing hurdles, has "brought Canada and the EU closer to each other."

Malmstrom arrived in Montreal Wednesday for her first meeting with International Trade Diversification Minister Jim Carr as well as the first joint committee meeting of CETA.

The trade commissioner and the minister are slated to address the Montreal International Relations Council Thursday afternoon on the subject of "International trade in troubled times."